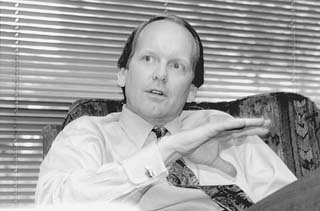 Mark Rose's multifaceted career has taken him from the Austin City Council to the LCRA, to Public Strategies Inc., to solo consulting, to his latest stopover at the Bluebonnet Electric Cooperative in Giddings, east of Austin. When he joined the co-op in June as interim general manager, Rose figured he'd stick around only briefly. He's since decided to accept the GM job on a permanent basis -- but not necessarily forever.

Is it a step down the career ladder for a man to go from running the day-to-day operations of the mammoth LCRA to running a smaller agency in a little country town? "It's a lot less income than I could make as a consultant," Rose says, "but after being here [as interim GM] I realized I really do enjoy the electric industry and I enjoy looking at strategies to grow an agency like Bluebonnet. It's also an opportunity to try and get involved in electric [issues] at the national level. So when I put it in that context, then yes, this feels right. It was the right decision." As LCRA's third-largest customer, Bluebonnet serves a 14-county region east of I-35 in areas where population rates are climbing. Rose, 49, resides in one of those growing communities -- Bastrop -- where he also serves on the school board.

Rose's role as a public figure began with his election to the Austin City Council in 1983. He served two terms before making a bid for mayor in 1987, but abandoned the campaign midway to take a job as director of administration at what was then a mismanaged and scandal-ridden LCRA. He moved up to the GM spot there three years later, gaining a reputation as a visionary with a knack for growing an agency and recruiting top talent. Along the way he acquired a fair number of detractors -- most of them in environmental camps -- who regarded him as brazenly intractable in the face of opposition.

After 10 years as GM, Rose decided to hit the road when he opened the daily newspaper one morning and spotted a page-one article on the rising power of the LCRA. Naturally, the story devoted most of its ink to the rising power of Rose. "I've got a big ego," he says, "but I don't want to be Mr. LCRA." He left the agency in January 2000 to pursue what was supposed to have been his dream job -- president and chief executive of Public Strategies, a consulting firm with national political and corporate reach. But he was miserable at PSI, and admits to making others unhappy in the process. He left -- of his own free will, he says -- the following year. The rumors about his departure point to a clash of leadership styles and egos. But as Rose tells it, "I didn't have the skill set for the job. I wasn't cut out for that type of public relations -- controlling the dialogue, managing the spin. I'm just not a press guy."

With that, Rose went solo with a home-based consulting business specializing in water and electricity interests, but this venture also led to another self-discovery: "I don't work and play well with myself." So, as one who thrives on the company of others, he decided to satisfy his people fix by taking a position outside the home. Enter Bluebonnet Cooperative, which happened to be scouting around for new leadership. For now, Rose says he's content, but don't expect him to stay at the co-op until retirement. Already he's thinking of another possible career move: teaching.