Jurors spent much of week three of the yogurt shop murder trial of Michael Scott watching nearly 20 hours of an exhaustive videotaped confession he gave Austin police in September 1999. 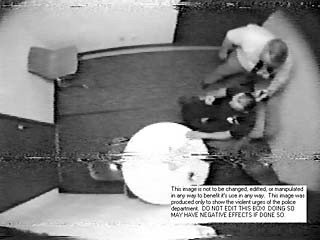 Police videotape of Michael Scott's interrogation apparently shows APD Detective Robert Merrill holding a gun to Scott's head. Merrill testified he was "role-playing," and held his fingers to Scott's head while holding his gun in the other hand.

Jurors spent much of week three of the Yogurt Shop Murders trial of Michael Scott watching nearly 20 hours of an exhaustive videotaped confession he gave Austin police in September 1999. On the first day of that interrogation, police grilled Scott for nearly 12 hours in a 7-by-10-foot room on the second floor of APD headquarters; by the end, Scott confessed he participated in the 1991 quadruple murder, which prosecutors say proves his involvement. But defense attorneys claim the confession was coerced, the result of brutal psychological interviewing tactics.

What if both sides are right? Even if Scott gave details implicating him in the murders, were police interrogators less than aboveboard in obtaining the confession?

The interrogation began with Scott sharing background info about himself with APD Detectives Ron Lara and John Hardesty. He claimed ignorance about the murders and described his memory as "piss-poor." Lara replied, "That's why we're here, to try and help you out with that."

Scott's protestations of innocence weakened after Lara and other detectives repeatedly told him his high school friends and eventual co-defendants Robert Springsteen and Maurice Pierce blamed him for the murders. Lara rescinded this statement on the stand last week; however, police legally can lie during interrogations, as long as they avoid turning voluntary statements into coerced confessions. After nearly four hours of intense questioning, and reassurances from the detectives that his friends had fingered him, Scott's story begins to change. "You need to say something really bad, buddy," Hardesty told Scott. "Because this next phase is coming really quick and your opportunities are diminishing. But I think you realize that, don't you?"

Scott gradually admitted to being in the yogurt shop early on Dec. 6, 1991, the day of the murders, while Pierce and Springsteen "cased" the place. He waited outside the shop that night while Pierce and Springsteen robbed the store, he added. He later told police he was inside the shop with a gun in his hands, and that he shot one of the girls, whom prosecutors say was Amy Ayers.

Detectives testified last week that their interrogation techniques were simply effective. The initial investigation into the murders continued for nearly eight years before Austin police (aided at times by federal investigators) arrested Scott, Springsteen, Pierce, and a fourth suspect, Forrest Welborn. Last summer, Springsteen was convicted and sentenced to death. Pierce remains in jail awaiting trial. Charges against Welborn were finally dropped after two grand juries failed to indict him.

Prosecutors say Scott admitted to details of the crime that only the perpetrators would know. But defense attorneys say Scott was coerced into confessing; the long hours in the interrogation room took their intended psychological toll, and any information he revealed came from prior knowledge or from parroting back to detectives details they had originally introduced. At Springsteen's trial, investigators admitted that they received false confessions and details of the crime scene so frequently that they suspected a leak in the police department. It's hard to say for certain what Scott learned from other sources prior to his interrogation.

Detectives Lara and Robert Merrill testified that Scott was not under arrest -- that he was never frisked, cuffed, or read his rights prior to questioning. However, did Scott feel free to leave? Defense attorneys might successfully argue that he didn't, especially if they can determine exactly what Scott's wife Jeanine said to him during a phone call he made from the cramped interrogation room. The videotape was rolling when Scott called his wife at nearly 8pm that evening (he'd been there since just after 9am) and the recorders captured his end of the conversation. After saying "Hello," Scott explains that he's still with the police, then there's silence as Jeanine talks. "Can't," Scott replies. More silence, as Jeanine responds. "I will be home tonight. A couple hours," Scott says. Silence. "Dear, I know more about this case than I thought I knew." The conversation continues for a couple more minutes before he hangs up.

Based on the context of the conversation, it appears that Scott's wife asked him to come home. If "can't" was his response, then he possibly believed himself to be under arrest. With a court-imposed gag order in effect since November 1999, the Chronicle couldn't find out exactly what was said on the phone; an answer likely will emerge during future testimony.

That's not all: Several hours into the interrogation, Scott told the detectives he thought he needed a lawyer, an attempt to invoke his constitutional right to have an attorney present during questioning. But APD detectives testified last week they believed Scott was only thinking about asking for a lawyer -- the same response they gave at Springsteen's trial last summer. When Springsteen asked about a lawyer during his interrogation, detectives left the room. When they returned, they promptly changed the subject.

And in the Scott interrogation's most infamous moment, Detective Merrill brought a revolver into the interrogation room to "help" Scott remember what he might've done that night at the yogurt shop through some "role playing." Gun in hand, Merrill walked around, then stood behind Scott and jabbed him in the head with what appeared to be the barrel of the gun. Merrill testified that it wasn't the gun but his finger. Nonetheless, the few seconds of video are startling. While the state could argue that the moment occurred well into the confession and couldn't have affected previous admissions, what does it take to render a confession false? Testimony continues this week.