I-35 expansion opponents from Eastside neighborhoods plan to apply for national historic area designation and promise to fight TxDOT along the way to salvage historic structures in their neighborhood. 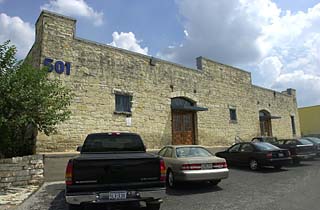 The 501 Building on the east side of I-35 is one structure that could be threatened by TxDOT's freeway expansion plans. (Photo By John Anderson)

In the good old days of highway building, engineers could pave over just about anything in their path -- and the Texas Dept. of Transportation earned a reputation for doing just that. The rules of the game changed in the past 30 years, however, and now endangered amphibians -- or even historic buildings -- can stall or alter a highway project. Such is the case with TxDOT's controversial $2 billion plan to overhaul a 45-mile stretch of I-35 from Georgetown to Buda, adding safety improvements, two main lanes and two elevated HOV lanes through downtown. Expansion opponents from Eastside neighborhoods plan to apply for federal historic protections and promise to fight TxDOT all the way to salvage historic structures in their neighborhood.

TxDOT has begun the project's environmental assessment, a federally mandated impact study to assess potential disruption to the surrounding area. Part of the assessment, as required by the 1966 National Historic Preservation Act, is a review of any historic buildings affected by the project. With some of Austin's older neighborhoods abutting the proposed right-of-way, however, the historic review process could sink the 13-year-old expansion plan into further controversy and delay. The agency has begun working with City Historic Preservation Officer Barbara Stocklin and the Texas Historical Commission to determine which historic structures the expansion might damage. It's a back-and-forth process, and ultimately the Historical Commission will decide which structures must be preserved.

Stocklin expects trouble to brew between residents -- who want to spare as much of their neighborhoods as they can -- and TxDOT, which wants as few structures as possible designated historic. She's pushing TxDOT to hold several public meetings this fall to specifically address historic impacts; so far, TxDOT's public-input process hasn't been informative enough, she says. "TxDOT has had lots of meetings," said Stocklin, "but I keep encountering people who have land the project is taking or where TxDOT is taking historic buildings, and [these residents] aren't aware of the impact. I don't think this is being disseminated very well."

Stocklin and TxDOT Historic Preservation Planner Daniel Harris have split the downtown area into three sections, and are currently examining historic structures from Town Lake to Seventh Street. In upcoming months they will compile reports for Seventh to Martin Luther King Boulevard, and from MLK to 53rd Street. TxDOT has already altered its right-of-way line to save seven structures south of Seventh, including the restored Robinson Bros. warehouse at Fifth Street. Stocklin and Harris say the real fights will come when the process moves north to neighborhoods such as Cherrywood, Blackland, and French Place, where many residents have joined the year-old North Central Interstate 35 Neighborhoods Coalition (NCINC) to collectively oppose TxDOT's current design.

Cherrywood Neighborhood Association member Bree Buchanan says her area and other Eastside neighborhoods are applying through the Texas Historical Commission for federal designation as historic districts, and will fight to save as many historically eligible structures as possible. (Two neighborhoods along I-35, Swede Hill and Rainey Street, have been listed on the National Register of Historic Places since the 1980s.) If a neighborhood is listed, it qualifies for review and possible protection under federal law, especially if residents can show that byproducts of highway expansion, such as increased air pollution and traffic, will be harmful to the area. "If more neighborhoods are designated, it makes what [TxDOT] wants to do harder," Buchanan said. "These issues will be raised. We are worried about cut-through traffic."

Harris concedes that the fewer historic buildings and zones found near the project, the better for TxDOT. "But that doesn't mean it's because we find them a nuisance or something," he said. The agency will follow the process required by federal law, with the amount of public input determining the length of the historic review process. That process could become an effective avenue for critics of the design to fight the project and force TxDOT to address their complaints -- including lack of direct access to the redeveloped Mueller Airport site, which residents say will increase traffic through their neighborhoods.

TxDOT officials say they hope to complete the environmental assessment phase of the project in the next six months; actual construction probably won't start until 2010, once enough funding and right-of-way land are acquired. A heated debate over historic structures could make that timetable hard to keep. "I've heard there's probably going to be controversy," Harris said of the looming historic review process. "When there's a project of this size and scope, there's usually controversy."