In a recent analysis titled "What Renewable Energy Means to Texas," environmental groups announced they're whole-hog on board with the emerging renewable energy industry, especially wind power. 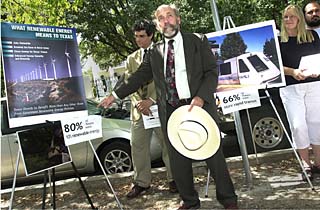 Now here's a story you don't expect: Environmental groups promoting Texas' energy production industry. In a recent analysis titled "What Renewable Energy Means to Texas," Public Citizen, the Sustainable Energy and Economic Development Coalition, and the Union of Concerned Scientists announced they're whole-hog on board with the emerging renewable energy industry, especially wind power. The report offers Texans a reason for joining them, beyond a clear conscience: big bucks. The timing of this report isn't random; the federal energy bill sits in conference committee, awaiting President Bush's approval. The Senate version contains a provision for a renewable portfolio standard (RPS) requiring electric utilities to obtain a certain percentage of their energy from renewable sources such as wind, the sun, bioenergy, and geothermal sources; the House rejected such a provision.

The study's sponsors say Texans need to push their Congress members to leave the RPS in the final version of the bill if only because our state stands to reap quite a "windfall" from the renewables industry. Language in the current Senate version requires that 10% of the electric energy in the United States comes from renewables by 2019, which Tom "Smitty-- Smith, executive director of the Texas office of Public Citizen, says could mean a "multimillion dollar benefit" to Texas. "The big news here is that Texas is No. 1 in terms of renewable energy potential," Smith said. Texas ranks first in the nation in its ability to generate with solar and biomass energy, and is a close second to North Dakota in wind potential. Along with S.E.E.D.'s Peter Altman and UCS's Deborah Donovan, Smith says Texas has seen a tremendous boom in the renewables industry already, thanks to a RPS signed into state law by then-Governor Bush in 1999. The Texas law has since been used as a model for other states and the Senate bill, he noted. In a twist on the tradable-credit system in Bush's federal anti-pollution plan -- reviled by these same enviros -- the Senate's version would assign utilities renewable energy credits; those lacking access to renewable sources could trade with companies that do have access.

Donovan says the Union of Concerned Scientists formulated its analysis by running the Senate bill's 10% requirement through forecasting models used by the federal Energy Information Administration to predict economic trends. However, the group altered the EIA's numbers, which she says underestimate renewables' potential, by allowing for a greater percentage of energy to come from renewables over time. "It's been proven in places like Germany, Spain, and Denmark that much higher percentages [can be achieved], up to 20, even 30% in some regions in Europe," she said.

Altman and Smith say that even with the altered numbers, the final model might be on the conservative side. With 10% renewable energy use by 2020, Altman said, the industry could directly spawn more than 64,000 jobs in Texas, including "better-than-average-paying" jobs in manufacturing, shipping, construction, and maintenance. The only real overhead, he said, is in building and maintaining the facilities and paying landowner royalties. After that, the wind comes free.

Not surprisingly, the energy industry isn't as enthusiastic about a RPS as environmentalists. A spokesperson for the Edison Electric Institute, the electric industry's lobbying arm, said the Senate bill would impose costs on investor-owned utilities without requiring an RPS of cooperative and municipal utilities, giving the latter an advantage. (However, many municipal utilities -- like Austin Energy -- already have more extensive renewables programs than their private-sector counterparts, because cities like Austin have put their own RPS goals in place.) Companies required to pay for credits would end up passing those costs on to customers, she added.

Smith of Public Citizen agrees that the RPS should be universal, but still supports passage of some form of required RPS in the Senate bill. For most consumers -- especially in Texas -- prices will drop, he says, because the standard will reduce reliance on natural gas, which is "extremely volatile" in pricing. But the five Texas Congressmen on the conference committee -- Joe Barton, Tom DeLay, Charlie Stenholm, Larry Combest, and Ralph Hall -- are key to getting a RPS passed, he said.

"We're hopeful of Stenholm and Hall," Smith said, "but we believe Barton and DeLay will oppose it and vote to once again prop up the dying coal industry, which produces a significant amount of the air pollution that plagues Texas." Combest is "undecided," he added. Calls to the offices of Barton, Combest, and DeLay were not returned. A spokesperson for Stenholm said the RPS "seems like a great idea," but that the 10% requirement is "ambitious." And an aide for Hall said the Congressman believes that states should have more influence than what's in the current bill. "He has concerns that a federal standard might not be workable," the aide said.