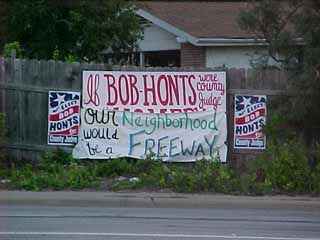 This sign near the Allandale exit of MoPac promoting the Republican candidate for Travis County Judge, originally read: "If Bob Honts Were County Judge, You'd Be Home by Now." Apparently, someone in the neighborhood thought differently, and decided to let "Road Warrior" Honts know it. Incidentally, the person who sent us this photo is not a disinterested bystander: Gretchen Vaden Nagy is an employee of current County Commissioner Karen Sonleitner, a Democrat who herself is up for re-election. Nagy is also the Democratic Precinct Chair for Precinct 239. (Photo By Gretchen Vaden Nagy)

Computer Science Corporation is cutting another 100 or so jobs from the Austin operation, leaving the company with about 800 local workers. When the CSC complex downtown was planned (and subsidized by the city), it was intended to house 3,200 employees.

The five members of the Travis Co. Commissioners Court have decided not to give themselves raises, citing budget concerns. The Court did approve raises for other offices, which won't go into effect until next April.

The City Council continued its work on the new city budget. See p.22.

After a series of damning columns by The New York Times' Bob Herbert and much prodding by the Texas ACLU and civil rights advocates, Attorney General John Cornyn has agreed to initiate a probe into the 1999 Tulia drug bust. More on this next week.

Citing personal reasons, Austin Community College President Richard Fonté -- who has not been very popular with faculty or staff -- has announced he won't seek renewal of his contract when it expires in 2004. Before he steps down, Fonté hopes to convince voters to authorize an increase of ACC's lowest-in-the-state tax rate.

The state insurance crisis continues to grow, as Farmers Insurance -- the second-largest in the state -- announced it would stop writing new homeowners policies in Texas effective Nov. 1. The company said the decision was in response to recent state sanctions against the company, while insurance regulators responded that the move was both wrong and unnecessary. For more on homeowners' predicaments in Texas, see p.21.

The Bush administration -- most notably VP Dick Cheney -- continued to press for more military action against Iraq, despite loud dissent even from prominent Republicans. House majority whip Tom DeLay weighed in for war, but the state's congressional delegation remains divided.

Travis Co. District Judge John Dietz ruled that the Texas Workers Compensation Commission has not sufficiently justified a new fee schedule for physicians the agency planned to impose Sept. 1. Business groups have endorsed the new fee structure, but labor groups and doctors strongly oppose it, saying it would radically reduce reimbursements for treatment of workers' injuries.

The First Lady of the Land came to Leander last week to dedicate the new Laura Welch Bush Elementary. The former schoolteacher and librarian now joins her husband and in-laws in the Things-Named-for-Me Club.