With arbitration clauses, homebuilders are erecting a legal wall to keep themselves out of court. 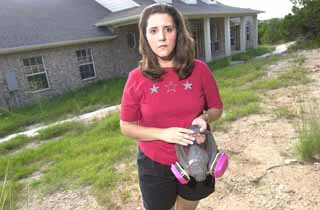 "We had no idea that by signing a contract we were giving up the right to ever have our story heard by a jury," says homeowner Dawn Richardson. "You never imagine that the people building your home are trying to hurt you."

In March 2001, Dawn and her husband Scott filed suit against David Weekley Homes, claiming their new $300,000 Austin house was contaminated with toxic mold resulting from a water leak that began the previous year, just days after they moved in. Though the family spent only five weeks living in their new home, Dawn Richardson says both she and her young daughter suffered neurological damage that physicians diagnosed as environmental toxic exposure, which may be irreversible. Under the terms of their contract -- an arbitration clause Richardson says she wasn't aware of -- a judge ordered the family in June 2001 to enter into arbitration with Weekley. The Richardsons have refused to arbitrate, saying the costs involved are too high, and the chances of winning are too low.

"This system is a dead-end street for consumers," Richardson said. "Builders have figured out a way to shield themselves from being held accountable for their actions."

More and more Texas homeowners who try to take homebuilders to court are finding they have signed away their right to sue. The binding arbitration clauses now present in most major home construction contracts keep lawsuits out of the courts and into the hands of private arbitrators. Though consumers can look at arbitrators' résumés before making their selections, records of arbitrators' decisions, which could suggest whether the arbitrator was biased, are (unlike judges' records) shielded from public view. By the terms of most arbitration clauses, arbitrators' decisions cannot be appealed.

"We may be witnessing the birth of a private judicial system created by corporations seeking to avoid legal responsibility for their actions," says Joan Claybrook, president of the consumer advocacy group Public Citizen. Texas Watch and Texans for Public Justice have also addressed arbitration, compiling reports of abuses and badgering the Lege for reform.

Binding arbitration clauses that shield businesses from consumer lawsuits have been creeping into many kinds of contracts over the past two decades, including credit card agreements and employment contracts. Clauses in home construction contracts have come under the closest scrutiny by consumer advocates and legislators, as growing public concern over health risks associated with mold sparks hundreds of new lawsuits against builders. The state Legislature's House Subcommittee on Binding Arbitration held a public hearing in May, and in December will issue recommendations in a report containing testimony and information from consumers, businesses, and experts from both sides.

Reggie James, director of Consumers Union's Southwest Regional Office, compared binding arbitration to a bullet: It does the same amount of harm to consumers whether they see it coming or not. Yet the practice does have its defenders, who say arbitration is faster and cheaper than court proceedings, which may drag on for years. Arbitration cases take just days or weeks to settle, and some contracts specify deadlines by which cases must be settled. "If there is a problem with the home we want to get it fixed as fast as possible," said John Burchfield, general counsel for David Weekley Homes.

While its defenders say arbitration is cheaper than the courts, it can also be more expensive, due to filing fees, arbitrators' fees, fees for use of the arbitrators' rooms, and other additional costs. According to Public Citizen's report "The Cost of Arbitration," one family awarded $18,819 in an arbitrated dispute over their Austin home faced $13,069 in costs -- as well as attorney fees, which arbitrators did not order the builder to pay.

Yet many consumer advocates say the arbitration firms themselves are biased. Contracts often allow builders to choose the firm used, and firms seeking repeat business from builders may have an incentive to decide against consumers. "If you were a business, who would you be more likely to want to arbitrate for you -- someone who had decided against you in the past, or someone you knew would decide for you?" asks Texans for Public Justice Research Director Andrew Wheat.

TPJ also suggests that contributions from homebuilders to Texas office-holders may give rise to bias on a much grander scale. The Weekley family has donated more than $300,000 to candidates in gubernatorial, legislative, and appeals court races since 1997, according to the nonprofit's records. Meanwhile, the PAC arm of Texans for Lawsuit Reform, run by David Weekley's brother Richard, has contributed nearly $2.6 million to statewide races since 1997. In the same time, the family of Bob Perry, another major Texas homebuilder that employs binding arbitration in its construction contracts, has donated over $2.2 million to state races. Other homebuilder PACs have donated nearly $1.8 million more, according to TPJ.