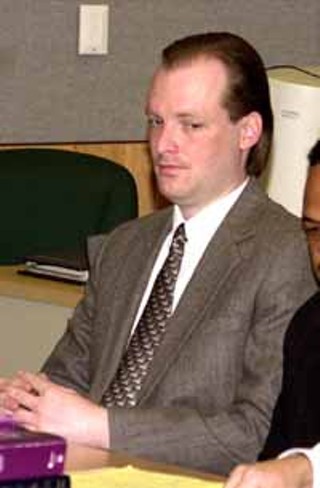 Week two of the capital murder trial of Michael Scott, the second of three defendants charged in the December 1991 deaths of four teenage girls at a North Austin "I Can't Believe It's Yogurt!" shop, focused on the fire that occurred in the shop's back room -- an attempt by the perpetrators, police say, to cover up the crime. The prosecution asserts the fire was ignited on the girls' bodies -- just as Scott described in an eight-page confession he signed in September 1999. Meanwhile, defense attorneys say that an Austin Fire Dept. investigator's decision to reverse his own initial reading on the case, which came after Scott's confession, represents yet another example of the state's attempt to make the crime fit the confession.

Relying on evidence he collected at the crime scene in 1991, AFD investigator Melvin Stahl originally concluded that the blaze began in a back corner of the store, on a set of metal shelves where paper and Styrofoam supplies were stored. The fire, he testified, spread upwards, out and across a walk-in freezer, and eventually to the floor, burning the bodies of the four girls. A large V-shaped pattern had formed on the rear wall where the corner of the shelves and the cooler met -- the most likely point of origin, he said. "Based on the amount of damage and the heat generated, [the origin of the fire] would be on the shelves where the 'V' pattern was located," he told the jury. Stahl had dismissed the possibility of the fire having started on the floor, partly because items stored near the floor featured burn marks indicating the heat came from above. Forensic evidence seemed to back Stahl's theory: Jennifer Harbison's body, which was closest to the metal shelves, appeared to have suffered the most severe burning. And on the other bodies, defense attorneys pointed out, the burn damage appeared most severe on the parts closest to the corner.

Stahl's theory predominated throughout the eight-year investigation until Scott's 1999 confession, a four-day ordeal that included dozens of hours of interrogation by APD detectives (20 hours were videotaped) and federal investigators' involvement. Scott signed a written confession in which he said the fire was started by covering the girls' bodies with paper goods, dousing them with lighter fluid, and igniting the blaze with a lighter. 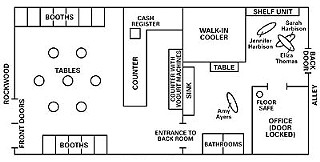 A scale diagram of the inside of the "I Can't Believe It's Yogurt!" shop (similar to the not-to-scale diagram shown here) as it appeared in December 1991 has been used to orient jurors to the scene of the crime and to aid the attorneys as each argues their theory of the crime. The prosecution has argued that the fire started on the girls' bodies; the defense says it started on the nearby shelves, contradicting the confession Michael Scott signed.

According to trial testimony, in the weeks after Scott's confession and the arrests of the suspects, APD detective Paul Johnson and an assistant U.S. attorney contacted Marshall Littleton, an agent with the federal bureau of Alcohol, Tobacco and Firearms, asking him to consider whether the fire might have started on the girls' bodies instead of on the shelves. "I was asked to define a fire scenario ... that would cause some of the fire signatures that were seen in [crime scene] photos from eight or nine years earlier," Littleton testified last week. According to court testimony, Johnson asked him to focus on photos showing the side of the room opposite from where the metal shelving stood. Based on burn marks on the shop's office door -- directly opposite the shelving -- and the burns on the bodies, Littleton testified that a fire started on top of the girls could produce a fire as intense as the one in the shop. Investigators then asked Stahl if he would "revisit" his initial findings, which he did.

"I looked at photos I had not seen previously," Stahl testified. "[And I] added to what I had [in his original investigation's conclusions] that there was a fire in the center of the room."

"That is correct," Stahl said.

How it came to pass that Stahl, the initial investigator at the crime scene, failed to see such crucial evidence -- especially since he testified that he was the one who took many of the crime-scene photos -- remains unexplained. Testimony continues this week.