The Battle for Senate District 14

Bentzin wields youth and money against Barrientos' age and experience 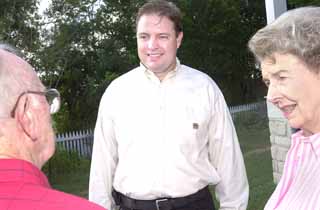 One of the most intriguing fall state races pits a well-known incumbent with a lengthy political record against a newcomer with little political experience but imposing personal wealth.

No, not Rick Perry vs. Tony Sanchez for governor, but the state Senate Dist. 14 race, in which the 60-year-old, 27-year legislative journeyman, Democratic Sen. Gonzalo Barrientos, faces the 37-year-old, overnight high-tech millionaire and philanthropist, Republican Ben Bentzin. "What separates me from Ben Bentzin," says Barrientos, "is basically my experience -- in terms of how the Senate works, and in terms of my long service to the citizens of the district." Bentzin counters that his own candidacy is "emblematic of the Texas ideal of the citizen-legislator: someone who steps out of private life and brings to the public arena the values and interests of the community."

In a normal year, the familiar and generally well-liked incumbent, running against the relatively unknown former Dell marketing executive, would be heavily favored. But the youthful Bentzin has ready access to funding -- his own as well as that of other high-tech figures who have contributed early and heavily to his campaign. He also has the uncertain leverage of a newly redistricted Senate District 14. The Republican-dominated Legislative Redistricting Board removed a large chunk of heavily Democratic South Austin and plunked it into San Antonio Republican Sen. Jeff Wentworth's Dist. 25, replacing it with more Republican areas in western and northwestern Travis Co. The district still leans Democratic, but there are also thousands of recently registered voters, and both candidates say they are working those voters hard.

"This is the first time in Texas history the capital city has been so violated by redistricting," says Barrientos. "The board took the very soul of South Austin -- home of the Broken Spoke and Barton Springs -- and put it with [suburban San Antonio's] Dominion Country Club. How is that a 'community of interest?'" Bentzin says in fact Barrientos was not a partisan target of the GOP, and that it makes sense that the district should now be "entirely within Travis County." Indeed, both campaigns agree that most of the original Dist. 14's population remains within the new boundaries -- Barrientos says 90%, Bentzin says it's "closer to 80."

Both candidates speak of the importance of education, health care, transportation, and insurance reform, but there are significant differences in how each would approach those problems.

Over the years, Barrientos has established a reputation as a consistent supporter of schoolteachers and of state employees, and he points to his record on education and the environment as strongly appealing to area voters. "We've got particular challenges at this time," he told the Chronicle. "Right now the state budget shows approximately a $5 billion shortfall [recently jumping to $7 billion], and I've been there in the hard times and the good. I have experience in finding funds to cover the gaps, while not increasing taxes -- that's experience that [Bentzin] doesn't have." Barrientos has proposed alternatives to prison for non-violent offenders as a way of conserving money for teacher pay raises while also preventing recidivism. "We spend anywhere from $15,000 to $40,000 annually on each state prisoner," he said. "That's money we could put to better use elsewhere."

Bentzin called Barrientos' proposal, in light of the area's crime rate, "ill-conceived and ill-timed," and says he'd rather find money for teachers by cutting administrative waste. Early on he emphasized as his first priorities education and transportation, but in recent weeks he says conversations with voters have pushed two other items to the top of his list: property tax reform and insurance reform. "Property tax reform is disproportionately a Dist. 14 problem," Bentzin says, "because 11 of the 14 school districts [within Dist. 14] are now subject to 'Robin Hood' [state equity payments]. ... The district includes 3.3% of the state's population," he continued, "but we are now contributing something like 12 to 14% of the Robin Hood dollars. We're being unfairly asked to shoulder a disproportionate burden."

Bentzin says the Legislature needs to move to define objectively what constitutes an "equitable education" under the state constitution, and not simply move property-tax money from Travis Co. districts -- where student-teacher ratios remain far above the state average -- for the benefit of students elsewhere. He acknowledges that Capitol insiders of both parties are suggesting there is insufficient "political will" to reform property taxes in the 2003 legislative session. "I've learned how to build consensus in community service," Bentzin says, "and I believe I can use that experience to help generate that missing political will."

Votes to Be Counted

It's a little early to predict how tight the battle for Dist. 14 will prove to be, but each candidate insists he's taking his opponent very seriously. Barrientos says that while it will be a little harder to find his votes in the western areas of the county, "Those folks in Lakeway and Lago Vista know me too, and I won't concede any of those votes." Bentzin says he would not have entered the race if he didn't think it was winnable, and points to his early lead in fundraising as indicating strong support against the incumbent. (The funding reports for the first six months give Bentzin a slight edge in contributions and "pledges," but he has also lent his campaign $100,000 -- although he vows he won't "self-finance," but raise the money to repay the loan.)

The newly rich Bentzin may be vulnerable to charges of political inexperience and presumption ("Some people start out by running for governor or congressman," he responds), but he argues that Barrientos has been a legislator for too long and with insufficient legislative success: "He doesn't know how to build consensus." Barrientos counters that Bentzin is a political novice in a time of budget shortfall and education and insurance crises, adding, "I have a record to stand on, and I am confident that the voters will continue to respond to what we've done."