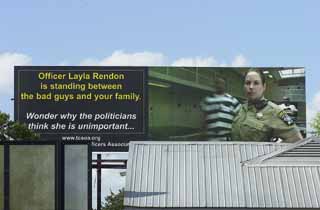 Layla Rendon, a single mother of two who has worked for the Travis Co. Sheriff's Office for 11 years, is the new poster child in the Travis Co. Sheriff's Officers Association's fight for a fair pay raise for all sheriff's office employees -- particularly corrections officers. Last year's budget completely overlooked the officers, and if the county's executive budget summary is any indication, they appear to have been left out again. Rendon lives paycheck to paycheck, she says, never sure she'll have enough money to cover her family in case of an emergency. "It's very hard," she said. "The everyday stuff, like a flat tire ... those extra expenses, I don't have the money."

During an Aug. 14 press conference held on the steps of the TCSOA's office on West 14th, new association President Greg Martinez called on the Travis Co. Commissioners Court to erase the class lines that have cropped up within the sheriff's office. "What they have done is create second-class employees," he said, by leaving out the "men and women who work behind [the jail] walls. No one hears about what happens inside, and that's going to stop."

During last year's county budget cycle, TCSOA members say, union leaders held secret, back-room meetings with county commissioners in order to secure a pay raise for the sheriff's law enforcement officers (the deputies on the street) by sacrificing a raise for corrections officers. "We fear the Commissioners Court has charted a dangerous course that, if not averted, will impact the safe operations of the jails," Martinez said. "It is unjust to allow politicians to play petty games of preferential treatment with something as serious as the public's safety."

The sheriff's office has been battling to increase the law enforcement officers' salaries to be on par with that of Austin Police officers. Deputies' pay, which used to begin around $32,000, could soon catch up with APD police salaries, which now start at nearly $38,000, but correctional officers' pay has stalled out between about $32,000 and $34,000 -- even though most corrections officers have the same training and qualifications as law enforcement deputies, and the correctional staff actually makes up the bulk of the sheriff's office's sworn employees (743 officers, compared to 232 street deputies).

The pay gap, Martinez noted, is insulting to corrections officers, who face as many dangers as street deputies. From January to June alone, TCSOA statistics show 60 cases of documented violence against staff by inmates, another 226 threats, and a total of 137 "critical incidents" reported. Furthermore, corrections staff has had to intervene in 408 additional incidents of inmate-on-inmate violence and 134 inmate-to-inmate threats. The Commissioners Court has sent a "chilling, official message to the majority of sworn officers that they cared less about them," Martinez said, "that somehow our jobs were less dangerous and demanding and therefore, less important."

The corrections officers' argument "is that their job is dangerous," Biscoe said. "All that's true, but I am not sure we are talking about the same level of risk. I don't think the case was as compelling for corrections as for law enforcement." He's sympathetic to the officers' arguments, but says there simply isn't enough money to go around. The county has $5.7 million in budget requests for raises, he says, but only $3.7 million to spend. "In the end I think the challenge is to look at them and be fair with the money that we have." Sheriff's office spokesman Roger Wade says Travis County's corrections officers are the highest paid in the state, and the fifth highest in the nation.

Yet Martinez says the perception that they're second-class citizens has prompted officers to search elsewhere for employment -- most notably at APD, which in turn means that the county must spend more to recruit, hire, and train new employees. The problem could be diminished, he argues, if the county raised officers' pay. The county's jails have failed surprise inspections by the Texas Commission on Jail Standards for the past four years, most notably for insufficient staff.

Biscoe acknowledges TCSOA's argument, but notes that attrition for corrections staff was lower than that for law enforcement deputies. The county-wide attrition rate hovers around 10%, he said, and is less than that for corrections staff. "My position is that in doing the budget process we should be fair," he said. "That doesn't mean [corrections officers] shouldn't make more. The question is when. We'll be hard put to make any significant increases this year."