Witness testimony in the capital murder trial of Michael Scott, the second defendant to stand trial for the yogurt shop murders, began August 14. 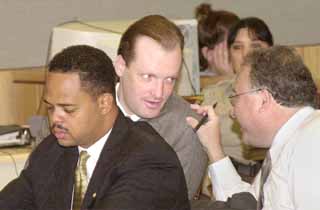 Witness testimony in the capital murder trial of Michael Scott, the second defendant to stand trial for the yogurt shop murders, began dramatically Aug. 14, when APD Detective Manuel Fuentes read the jury a statement Scott gave police in September 1999 implicating himself in the grisly murders. In eight typed pages, Scott gave Fuentes the rough details of the infamous December 1991 murders of four teenage girls -- Eliza Thomas, 17, Jennifer and Sarah Harbison, 17 and 15, and Amy Ayers, 13 -- inside a North Austin "I Can't Believe It's Yogurt!" shop.

Scott's statement was finalized after four days and numerous hours of intense police interrogation by at least five different investigators. During the process, his story morphed significantly. Yet the state's case is clear: The confession, a product of deft police work that was written as well as catalogued on several videotapes, proves his involvement in the crime by offering up details that only the killer would know. Meanwhile, the defense says the confession is a classic example of police coercion -- the result of misapplied interrogation techniques. A detailed scenario outlining the killings, as decided by police, was passed on to Scott over the many hours of psychologically draining questioning, they say. "The families of these girls deserve the truth," defense attorney Carlos Garcia told the jury. That truth won't arise by prosecuting his client, he said; too much about the case just doesn't make sense.

The girls' bodies were found in the shop's back room just before midnight on Dec. 6, 1991, bound, shot in the head, and badly burned in a fire police said was started to cover the crime. The investigation continued for nearly eight years, culling thousands of tips, until October 1999, when police arrested and charged Scott, Robert Springsteen, and Maurice Pierce. (A Travis County grand jury twiced failed to indict a fourth suspect, Forrest Welborn.) Last summer, Springsteen was tried and sentenced to death. Pierce -- who has never wavered from his insistence of innocence, and on whom the state has no apparent evidence -- remains in jail, awaiting trial. Problems plagued the investigation: Most notably, between the fire and the firefighting efforts, investigators were unable to collect any physical evidence from the scene, save for several hairs and latent prints which, to date, have never been matched to anyone. Without any physical evidence, the state's case against Scott -- as it did last summer with Springsteen -- likely will rest entirely on his confession.

On its face, the confession -- a brutal rendering of what may have happened that early December evening 11 years ago -- appears damning. "On December 6, 1991, I was with my friends Maurice, Rob Springsteen, and Forrest," he told Detective Fuentes. "We were at Northcross Mall sitting at a round table at the food court. Maurice brought up that he needed to get some money. I don't remember the specifics about what was discussed, but I do know that this is what brought all this to be." The boys, Scott told Fuentes, decided that robbery would be the easiest way to get some money, so while it was still daylight, they set off looking for a place to rob. They ended up at the yogurt shop, and Pierce talked to a girl at the counter while he and Springsteen pretended to go to the bathroom; instead, they walked out the shop's back door. The four returned to the mall, until Pierce told them it was time to go back to the shop. When they arrived, Scott said, Welborn waited in the car while he grabbed a can of lighter fluid and followed Springsteen and Pierce through the back door. But the robbery went bad, Scott said: Pierce couldn't find any money in the register, and began screaming at the girls, asking where the money was.

Scott was in the front of the store, he told Fuentes, and when he went to the back all four girls were naked. "The girls were crying and whimpering. They were begging for us not to kill them. They said that they didn't want to die," he said. "Maurice was screaming, saying, 'Where the fuck is the rest of the money?' I heard a bang, a crack. It sounded like a gun going off."

Considering the existing evidence, the confession isn't entirely accurate -- and last week was contradicted by one of the state's first witnesses. During the course of Scott's confession he admits trying to rape one of the girls, and says Springsteen actually did. But according to evidence presented at Springsteen's trial, as well as 1999 court proceedings, neither Scott nor Springsteen had ever mentioned the rape until Texas Ranger Sal Abreo suggested it to each of the men during questioning. Furthermore, aside from one girl who the medical examiner believes may have been sexually assaulted with a foreign object, autopsy reports provide no evidence that any of the four girls had been raped. While at first Scott told Fuentes that all four girls were naked when he entered the back room, he later told the detective that one of the girls had, "like, a white T-shirt on." Scott also details at length Pierce's attempt to open a safe in the shop's office, but police had already confirmed that the office was locked and did not show any signs of having been opened that night.

During opening statements, defense attorney Garcia contended that when Detective Paul Johnson reordered the investigation in 1996, he went about the job backwards. Instead of starting at the beginning, with "objective evidence" such as crime scene details and solid physical proof, he headed straight to tip files and tried to make details fit a police-made scenario. Investigators worked from a conclusion back to a suspect, Garcia told jurors. "There was no objective analysis" of the original crime. The prosecution's initial ordering of witnesses suggests the backward approach Garcia described. As their first witness, Assistant District Attorneys Robert Smith, Darla Davis, and Efraim de la Fuente called Fuentes, who read the written confession but couldn't testify about the original 1991 investigation (he wasn't involved), the majority of interviews that led to Scott's confession, or the details contained therein. In fact, Fuentes was not assigned to the case until July 1999, he testified, and was privy only to information Detective Johnson supplied to him. Prosecutors then revisited the night of the murders, calling, most notably, Dearl Croft, a yogurt shop regular who was a security guard at the time. Croft testified that he visited the shop around 10pm that night; in line in front of him was a suspicious-looking man dressed in a green army jacket. The man asked him about his security guard car, which was parked out front, and insisted that Croft should cut in front of him. Finally, Croft said, the man slipped into the back, headed, he thought, to the bathroom. The man gave Croft such a funny feeling that he stuck around, but the man never returned, so Croft eventually left.

Croft could not identify the suspicious man he saw as being any of the Yogurt Shop Four. But the testimony is troubling: Croft is sure he was there at 10pm. Scott's confession puts the boys there during daylight hours. And Croft's inability to match the suspicious person to any of the defendants suggests exactly what the defense asserts: that someone other than Scott could have committed the crime. "All I ask you to do," Garcia told jurors, is to follow the law and, "accord us the presumption of innocence." Testimony continues this week.