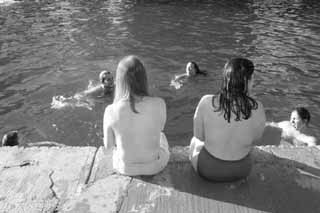 Austin American-Statesman Lifestyle section columnist Jane Greig wrote a rather prudish July 28 column suggesting that Austinites should contact City Council members and demand an ordinance banning topless female sunbathers. Within minutes, voilá! -- a movement was born, but not the one she intended. "Critical Tits" met Aug. 2 at Barton Springs to revive the increasingly rare Austin tradition of bare breasts at the local swimming hole. Avert your eyes, Jane. (Photo By Jana Birchum)

Council Member Daryl Slusher, much maligned during the Stratus debate, spent much of the past week promoting his idea to establish a community fundraising effort to purchase land owned by Stratus Properties -- specifically the 246-acre Tract 110, slated for office development. Perhaps he could pick up some extra cash from some of the prominent Stratus-oriented folks who donated funds to his May electoral campaign. They include lawyer Richard Suttle of Armbrust & Brown, the firm that has served as Stratus' general counsel; Alan Glen, Stratus' lawyer for their Fish & Wildlife Service consultation; and Stratus executive Ken Blaker. Other prominent Slusher donors include developers Brad Schlosser and David Vitanza (whose Sixth+Lamar project has attracted controversy due to its plan to house a Borders near the locally owned BookPeople), attorney Steve McConnico (same firm as Casey Dobson, city's attorney for the Stratus negotiations), and state Dem kingmaker Ben Barnes, who in the Seventies sold the Barton Creek Estates to infamous developers Freeport-McMoRan Inc. -- L.A.

On a less cynical note, Slusher has recruited longtime environmentalist Shudde Fath to serve voluntarily as interim treasurer of his Stratus land acquisition effort until his proposal jells into a structured organization. Stratus has agreed to negotiate a right of first refusal on Tract 110. To donate to the land effort, make checks payable to "Buy Stratus Land" and send to PO Box 5923, Austin, TX 78763. For more info, contact Slusher's executive aide, Tina Bui, at 974-2260. -- L.A.

Although longtime Travis Co. Jail psychiatrists Larry Hauser and Jefferson Nelson recently ended their contract with the County (as reported in our Aug. 2 cover story, "The Short Unhappy Life of Sophia King"), Sheriff's Office spokesman Roger Wade says their departure doesn't automatically cast a dark cloud over the future of services for inmates. Hauser and Nelson combined weren't able to provide 40 hours' worth of services for the county per week, Wade said, even though they cost the County more than would one full-time psychiatrist. (Neither could be reached for comment.) TCSO is the single largest mental health provider in the county, Wade added, with nearly 400 inmates receiving psych services at any given time. Currently the county is searching for one full-time psychiatrist to manage the jail's mental health needs; in the interim, they're contracting with a temp agency. -- Jordan Smith The possible discovery of the toxic mold Stachybotrys in at least 10 classrooms at Travis Heights Elementary has district officials scrambling to move nearly 132 students before the school year begins next week. Students from six fourth- and fifth-grade classes will spend the first half of the school year being bused to Becker Elementary for classes during mold remediation efforts. Four additional classes of third-graders will stay at Travis Heights, but will move to different rooms. Travis Heights was not among the eight schools designated for mold remediation efforts as part of the AISD's $49.3 million Health and Safety Bond package, passed in February, so the funds will have to come out of the district's general maintenance budget (for more on AISD's mold problem, see "How Much Mold?," April 19). -- J.S.

Think you have a knack for urban planning and design? The city will soon begin seeking public input on its proposal to codify portions of the Downtown Austin Design Guidelines, intended to make our central city prettier, more ped-friendly, and livable. On Tuesday, Aug. 20, at 7:30am, the city will host the first of three hearings on the guidelines; items for discussion include Green Building, parking structures and landscape surface parking, and prohibition of drive-in services and service stations. Bring along a bagel and your personal copy of the land development code. 1011 San Jacinto, third floor conference room. Call 974-6413 for more info.

City Council is scheduled this week to hire an outside lawyer to defend the city in a lawsuit filed on behalf of Brenda Elendu, mother of Sophia King, slain by Austin police in May. Also on tap: directing staff to draft an ordinance restricting trucks from using the left lane on I-35 in Austin. The Legislature granted this authority to other Texas cities, but Austin officials didn't realize this fact until Statesman reporter Kelly Daniel told them. And at 5:30pm, Mayor Gus Garcia will present the Friends of Deep Eddy with a proclamation to make August 17 Deep Eddy Day, in honor of the historic Zilker Park pool. -- Mike Clark-Madison

As of press time, 10 jurors had been chosen to hear the capital murder trial of Michael Scott, one of three defendants charged in the 1991 yogurt shop murders. Jury selection is moving faster than expected, and court sources say if things continue apace, Scott's trial could start as early as next week. Of the court's initial pool of 200 potential jurors, 30 indicated serious problems with imposing the death penalty, and 22 had already arrived at their own conclusions regarding Scott's guilt or innocence. Only three said they'd never heard about the infamous case. -- J.S.

New Georgetown Mayor Gary Nelon presided over an Aug. 6 groundbreaking ceremony at the Rivery Tract -- 125 acres symbolizing the politically divisive debate over future development in the Williamson Co. seat. City officials say the development is the largest in Georgetown's history. The first phase will feature a 205,045-square foot Super Wal-Mart and a 115,282-square foot Home Depot, scheduled for completion next fall. Multifamily housing will follow in 2004, and office and additional retail space will come after that. Development on the site has been both long planned and controversial, but the nastiness of the debate dissipated earlier this year when voters ousted Mayor MaryEllen Kersch in a recall election. -- J.S.

Over the objections of East Austin's El Concilio group, the City Council approved a waiver allowing Juan in a Million on E. Cesar Chavez to sell alcohol despite being adjacent to a church. While making clear that they have no problem with restaurateur Juan Mesa himself, activists, including Susana Almanza and Gavino Fernandez, objected to (in Almanza's words) "bringing alcohol to his family restaurant and to the center point of the community." The item passed 6-1, with Danny Thomas providing the no vote. -- M.C.M. West Nile update: Using hamsters, researchers at UT Medical Branch in Galveston are trying out a vaccine for the West Nile virus and will soon begin testing experimental treatments for the disease, which can cause fatal encephalitis. Local health authorities confirmed that a dead bird found in Barton Hills was infected with West Nile, the virus' first appearance in Travis Co. as it makes its way across the South and West. Mosquitoes spread West Nile from birds to humans, but you can't get it from another human being. Given the danger, the city/county health department has stepped up its mosquito control program, which includes spraying of "safe" insecticides as a last resort. If you object to such spraying, or if you want to report a mosquito problem, the number to call is 972-5600. -- M.C.M.