Railroaded at Third and Lamar 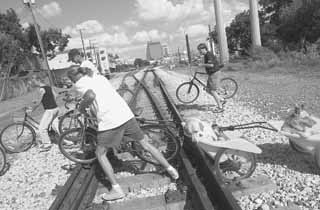 On almost any day of the week, about 600 pedestrians -- many carrying bicycles -- navigate their way across the railroad tracks at Lamar and Third Street. That surprising statistic was gleaned from an informal study that city staff members conducted last summer with the aid of a video camera installed above the tracks. Yet evidence supporting the need for a pedestrian/bike crossing over the tracks hasn't convinced the right-of-way owner, Union Pacific Railroad Company, to build one -- not even after the city has offered to foot the bill.

Linda DuPriest, coordinator of the city's bicycle and pedestrian program, had hoped the rail company would grant the city's request for two reasons: Apart from the obvious safety issues, the city also wanted the crossing included in the proposed Third Street route of the Lance Armstrong Bikeway, an ambitious $4 million cross-town project. Along with project manager and public works engineer Tom Benz and Houston bicycle consultant Wilbur Smith, the group drew up a formal proposal, complete with a design, a construction expense estimate of $165,000, and other improvement cost projections, and presented the plan to the rail company. Benz followed up with a phone call. Two months later, the company sent a terse rejection letter, concluding, "Union Pacific Railroad is not agreeable to having a bike path at this location. Thank you for your time."

"They opposed it very strongly," DuPriest said. "We made the decision then to choose an alternate route (Fourth Street) and continue working under our timeline." With that, the Third Street rail crossing effectively became a dead issue, but the heavy foot traffic continues nonetheless.

Now, a year later, a group representing the interests of pedestrians, bicyclists, and the disabled are renewing efforts to safely -- and legally -- achieve access over the well-traveled tracks to accommodate the foot traffic heading north and south on Lamar. Austin attorney Brad Rockwell and bicycle advocate Eric Anderson have obtained more than 100 signatures from people who live or own land within five miles of Third and Lamar. Rockwell, who lives on Third, forwarded the petition to Union Pacific, demanding that a crossing be built in accordance with a state statute (known as the "farm crossing law") that requires railway companies to provide a "free and easy passage" across train tracks if residents living within the five-mile radius make such a demand.

Again, the company refused, pointing out that the law doesn't apply in this case because of the existing underpass at the same location, which Union Pacific and the city built years ago, primarily for vehicular traffic. "There's no reason to put a pedestrian crossing there," said Rick Walton, general solicitor for UP in Houston. "It's not a feasible or sensible solution." Why? "First of all, they're trespassing and they're taking considerable risks -- it's just not a safe place to cross the tracks. There are other ways to gain access (north or south of the tracks). I would think there would be a number of alternate crossings that would solve the problem."

Moreover, the lawsuit-skittish company doesn't want to add to its long list of liabilities by creating yet another potential legal burden. Another issue is the required blaring of the train horn at all crossings, and at least one nearby property owner, Post Properties, has weighed in to oppose the crossing on that basis alone. "The Old West Austin Neighborhood Association already has a number of issues about the noise from the tracks," Walton said. "Obviously if there were a crossing there, that would [generate more complaints]."

Given Union Pacific's immovable stance, proponents of the crossing now want the city to revive the cause, particularly since the original design of the Pfluger bike/pedestrian bridge across Town Lake was intended to direct northbound travelers to Lamar as they make their way toward the Sixth and Lamar retail area. However, the latest design of the bridge's extension (that is, the latest design before the City Council sent it back to the drawing board in May) shows a northeastern arm that would steer travelers east of Lamar on a path that would meander between the old Seaholm Power Plant and a proposed Lumbermen's development, continuing northward to an underpass that would tunnel under the rail tracks at Third and Bowie -- more than a block east of the current preferred route at Third and Lamar.

City staffers are still fiddling with the bridge design, a prominent feature of the proposed Seaholm District Master Plan, which is expected to make its third visit to the council at the end of summer. By most accounts, the proposed northeastern extension of the bridge is staying put. It goes without saying that the pedestrians, bicyclists, and wheelchair users who favor a more direct link between South and North Lamar are strongly opposed to the northeastern route. Which brings us back to the Third and Lamar rail crossing issue: Proponents of the crossing say the city gave up too easily in the face of rejection to avoid going to battle with a mammoth, 140-year-old company.

"The city has been reluctant to fight these battles," Anderson said. "It's quitting too easily because it's a bicycle and pedestrian issue. But we think the city has the power to negotiate or to play hardball." Similarly, Rockwell believes the city would have a winnable case by exercising its eminent domain powers. "It's silly to say the city can't do anything about it when they can," he said. But will it? Not any time soon -- at least not as long as budget issues are dominating the council's agenda.

"We didn't take the [crossing issue] anywhere beyond that point of rejection," said Benz, explaining that the ongoing bikeway project is relying on state and federal grant money (in addition to existing bond money voters approved in 1998), and the city is trying to stick within the timeline required by such funding sources. Another reason the city opted to go with the Fourth Street alternative, Benz said, was because of the possibility of the bikeway construction conflicting with the Seaholm/Lumbermen's construction. A more likely scenario, however, will have the bikeway long completed before dirt is ever turned on the long-delayed Seaholm project, whose funding has yet to be decided by City Council.

For now, the bikeway project is DuPriest's top priority, and the UP crossing issue will have to wait. "We were told no, so Tom and I made the decision to go on with the project and keep [the rail crossing] in the back of our minds for now. But I do think it's worth exploring further."

Meanwhile, activists will continue pressing the issue in hopes that someone on the council will take up the cause. Promised Anderson: "Our strategy now is to quietly lobby our friends on the council."