It's a Done Deal

The City Council approved the Stratus settlement 6-1. Now what? 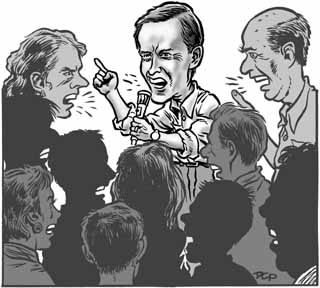 In their adamant haste last Thursday to approve Stratus Properties' 1,253-acre development proposal for Southwest Austin, the City Council endorsed the controversial deal hours after it had undergone yet another round of revisions on which the public had no opportunity to comment. Only Raul Alvarez voted no, with the other six members seemingly married to the settlement, which takes effect Aug. 15 -- timing that effectively prevents any plans by the Save Our Springs Alliance or other opponents to gather the thousands of signatures required to hold a public referendum and possibly overturn the deal.

Until the final moments, council's monthlong discussion of Stratus maintained its chilly predictability, with members' minds clearly made up, the deal's opponents loudly fed up, and each side increasingly too tired and bitter to listen to the other. Patience, already in short supply after a complicated month of number-crunching and mutual intransigence, evaporated by the final moments, when Daryl Slusher, interrupted by the increasingly noisy audience, declared angrily, "I'm going to finish. I'm not going to make my decisions on people hollering from the crowd. That's not the way government is going to work up here."

Prohibited by council from commenting on the new changes, audience members opposed to the deal waved homemade signs in front of the city's Channel 6 cameras -- but not all remained silent. Even home viewers could hear an exasperated Bill Bunch, executive director of SOS, shout from the floor that council members were "misstating the facts." Given the scope of the settlement and the short time that lapsed between the deal's finalization and council's vote, it's unclear whether members had time even to process all the facts.

Also hazy are some key issues of the deal. While Stratus CEO Beau Armstrong says the company plans to break ground within the next year, Stratus, the city, and the Circle C Land Corp. still face a lawsuit filed last month by SOS and the Circle C Neighborhood Association claiming that the SOS ordinance is exempt from Stratus' Chapter 245 claims, and therefore legally applies to the development. Furthermore, details regarding the Longhorn Pipeline, which passes through several Stratus-controlled tracts, did not appear in the draft of the settlement posted on the city's Web site July 30, and at press time had yet to be placed there for public review. Stratus plans to build a 450-unit apartment complex along the pipeline, north of Slaughter Lane and west of MoPac. Another Stratus tract near the pipeline is slated to accommodate a new middle school.

At the meeting, city Fire Chief Gary Warren told the council he would require Stratus to submit a technical report to the Fire Dept. and its engineers detailing how it will prevent fire exposure to residents of what we like to call the "Chateau du Longhorn." He also plans to require construction that would allow a one-hour time window for prospective residents to vacate the premises without being "exposed to radiant heat." "My main concern is protecting people," Warren says.

What about residents who might be outdoors at the time of a pipeline break? Warren said that he didn't know. "There's probably a million different scenarios that can't be planned for," he said. "There's really no way to know what will go wrong." Contacted by the Chronicle Friday morning, Warren hadn't realized that a school -- one of the touted benefits of the settlement -- was planned near the pipeline.

For his part, Armstrong says that the setbacks from the pipeline will be larger on the multifamily tracts than on retail tracts, where they are "not as important" as those where people are living 24 hours a day. "We clearly don't want to do anything to put anybody in harm's way," he said. An ordinance proposed by Alvarez and Danny Thomas, and Mayor Pro Tem Jackie Goodman, would direct the city manager and staff to come up with greater setbacks (possibly 600 feet) between certain new developments and all hazardous liquid pipelines running through Austin's jurisdiction. A draft was requested within 30 days; the city's legal department is developing the language. However, under the deal, Stratus would either be exempt from any future ordinance governing pipeline safety, or would be "grandfathered" out of it.

Earlier on Thursday, the council emerged from executive session and announced that the city would appeal U.S. District Judge Sam Sparks' recent ruling to allow Longhorn to proceed without a full environmental impact study. That will be a tough road, given the conservative bent of the federal appeals court and state Land Commissioner David Dewhurst's decision last week to approve the pipeline's state easements necessary to begin operations.

The pipeline, which the city clearly considers a potentially major health and safety hazard, did not factor greatly in the discussion of the Stratus proposal until very late in the game. An explanatory letter written by Council Members Slusher and Will Wynn that Texas Monthly magazine Publisher Mike Levy distributed last week to his large e-mail list focuses on rebutting Stratus opponents' many arguments against the deal, but makes no mention of the 50-year-old pipeline, which passes through several South Austin neighborhoods in addition to the planned development, and through which Longhorn plans to begin pumping jet fuel and gasoline by autumn.

In any case, the final Stratus settlement looks roughly the same as the version posted on the city's Web site just before the controversial final vote. Aside from giving Stratus $15 million in fee waivers (referred to by council and city staff as a "buydown" to lessen development over the aquifer), the settlement awards acreage to the Wildflower Center and the Circle C HOA to be maintained as open space, while allowing Stratus to build 1 million square feet of commercial space, 830 houses, and 900 apartments.

The final agreement also includes some changes and enhancements made since council first voted on the proposal July 11. The settlement originally allowed one gas station, but the final agreement permits none. The city and the Barton Springs/Edwards Aquifer Conservation District will negotiate terms of an interlocal agreement that would authorize the District to monitor water quality and maintenance, with the pro-settlement Circle C HOA covering some of the costs; the city's Watershed Protection and Development Review Dept. will oversee the process. The final agreement does exclude a draft clause imposing financial penalties on the city in the event council decides to down-zone one of the tracts without approval from Stratus or other landowner; however, if Stratus or the landowner objects, the down-zoned tracts will be removed from the settlement, conservation easements, and agreement Stratus made to comply with Green Building program requirements. Three other tracts in the deal -- including one that lies on the recharge zone, and two designated as open space -- could also revert back to pre-settlement status in such a situation, "at the option of the Circle C Land Corp."

Armstrong says that due to the current area glut of office space, the office tract, Tract 110, won't be developed for at least three years, and perhaps as many as 10. That tract has generated the most controversy, due to the planned density and impervious cover, and boasts unique environmental features, as well as more than a mile of frontage on MoPac, utilities, and a flat grade. Calling it one of the development's most valuable tracts, Armstrong estimates its value at about $20 million. Slusher -- who said he "feels good" about the vote -- has proposed a community effort to raise money to buy Tract 110 from Stratus, and says his idea already has generated positive correspondence. While Stratus "would like nothing more than to sell the property," Armstrong said, "you hear about shareholders -- well, I'm accountable to them. It wouldn't be right for me just to give this stuff away any more than we have already."

Though this round at council is over, more Stratus-related controversy lies on the horizon. The company plans to develop 2,400 additional acres in southwest Travis Co., much of it on environmentally sensitive land. Armstrong says he plans to talk to SOS and other opponents of the recent deal to discuss the aquifer's future and other matters of concern.

Bunch "won, in my mind," Armstrong said. "I was hoping he would become our greatest champion once we agreed to comply with [the SOS ordinance]. I think we have the same goals -- the last thing we want to do is see the quality of the aquifer diminish further." About the pending lawsuit filed by SOS and the Circle C NA, Armstrong says he hopes to "sit down" with Bunch and work things out, "without spending more money on lawyers."

As for the New Villages at Western Oaks Neighborhood Association -- excluded from negotiations until very late in the game, despite being neighbors to the tract slated for the densest development -- members say they'll nevertheless attempt to address issues such as traffic, safety, and overcrowding at Mills Elementary by working with the school district and the city. "The fact that the deal was passed doesn't make some of those issues go away, said Treasurer and Board Member Paul Tesluk. Toward the end of negotiations, the city was making more of an effort to work with NVWO, he says, but the city had already made "too many commitments" with Stratus to give full merit to the association's concerns.

At the council meeting, Bunch also encouraged the council to vote against increasing payments for further negotiation and documentation on the Stratus deal, and to seek public approval. "It seems like it would be worth it for both your lawyers, yourselves, and ... for the public to take a couple more weeks to look at the work product that you're paying so dearly for here," he said. But council wasn't swayed.

When it finally came time to vote, Mayor Gus Garcia asked City Attorney Sedora Jefferson how many votes were required to pass the agreement -- which is in essence a contract tied to a group of zoning cases on the affected land. Jefferson replied that only a majority was required. She recommended that council lump the zoning cases together into a single vote, which streamlined the process but prevented members from rejecting zoning that they might regard as problematic -- for example, the tracts near the pipeline. Some Stratus opponents question whether this amounts to "contract zoning," as opposed to zoning that conforms strictly to the city's standard zoning guidelines.

"We'll be looking into that," said Save Our Springs' Colin Clark. "What council approved remains unacceptable, and we'll continue to work against it." The Alliance will continue to pressure council to develop a comprehensive plan to save the Springs, he added.