Will He, Would He, Woodlawn? 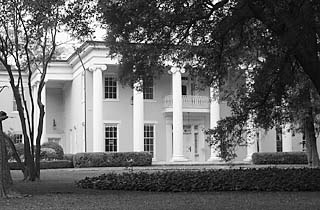 Things to do before buying a historic mansion in Austin: Submit your bid to the state land office. Choose which sections of the house you want to lop off. Present those plans to the Texas Historical Commission. Apply for city landmark status from the city's Historic Landmark Commission. Then decide if you actually want to purchase the place.

So goes Austin investor Jeff Sandefer's effort to buy Woodlawn, the sprawling 22-room Pease Mansion in West Austin's Enfield neighborhood. The state has been taking offers on the crumbling estate since late last fall, and so far, Sandefer is the most promising prospective buyer. His bid, announced in May, exceeded the state's $3.05 million asking price, and he has until late August to evaluate the property and decide if he wants it, according to the Texas General Land Office.

Sandefer appeared before the Landmark Commission last week to "feel them out," said city Historic Preservation Officer Barbara Stocklin, and to see if the board would approve his proposed refurbishments and grant Woodlawn landmark designation. The board approved Sandefer's requests, contingent upon his purchase of the estate. Stocklin says she will delay the landmark paperwork until Sandefer buys the house, because state officials don't want Pease designated as a historic landmark if it's still in their hands. The city's designation imposes restrictions on refurbishment or renovation that might turn off other potential buyers, if the Sandefer deal falls through. Though it's already listed on the National Register of Historic Places, Pease has never before vied for city landmark status.

Sandefer plans to use the mansion as a residence, but wants to remove two one-story guesthouses and a rear section of the main house added in 1957 by Gov. Allen Shivers. The additions, Stocklin said, "are not really compatible with the historic nature of the house. They kind of take away from it." The board approved those changes but wanted to see more information on Sandefer's plans to alter a wing on the house's west side, added in 1903.