The Stratus Properties development deal heads for a third and final City Council vote, just as environmental and neighborhood opponents step up demands for a referendum. 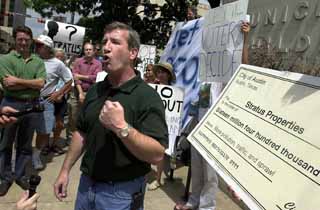 You need a daily tip sheet to keep up with the mutating Stratus Properties agreement -- not to mention the curve balls thrown from the sidelines. The development deal is headed for a third and final City Council vote today (Thursday), just as environmental and neighborhood detractors are stepping up demands for a voter referendum.

Should the council approve the proposal, opponents are asking for a 90-day delay before the agreement takes effect. This would allow petition canvassers time to collect signatures from the requisite 10% of the voting population to qualify the Stratus question for the ballot. About 20 representatives from the Save Our Springs Alliance, the Sierra Club, and various neighborhood groups announced the referendum effort at a Monday press conference in front of City Hall.

By all appearances, the council and staff really want to put this albatross behind them once and for all. This council in particular is not accustomed to being on the "wrong" side of a controversy, as thousands of citizens, via e-mails, faxes, and phone messages, keep pointing out. Six council votes are required to validate the document that lays the groundwork for more than 1,253 acres of commercial and residential development -- with the bulk of the projects planned in the hypersensitive recharge zone of the Edwards Aquifer. In two previous readings, the council passed the deal 6-1, with only Raul Alvarez dissenting. As if things weren't complicated enough, conflicting reports on the number of votes required to pass the final agreement added to the confusion. The official word from City Attorney Sedora Jefferson is that the deal would only require a simple majority, "although six votes would certainly be preferable." That opinion will likely be questioned, if not challenged, by the SOS Alliance, which argues six votes are necessary because the agreement doesn't fully comply with the SOS ordinance. The city's position holds that the ordinance doesn't apply to Stratus because of the developer's "grandfathered" claims under old regulations.

The agreement was still undergoing alterations early this week, with the most critical loose end fraying over how Stratus would be compensated if the city decides to downzone the property in the future. Also, as of Tuesday afternoon, negotiations with the New Villages at Western Oaks Homeowners Assoc. had not produced the desired results for either side. The neighborhood had been overlooked in the initial Stratus negotiations and thus ended up with the densest development on neighboring tracts.

Another sticky wicket in the deal concerns the proposed Longhorn Pipeline, which lies adjacent to a tract on which Stratus plans to build a 450-unit apartment complex, north of Slaughter Lane and west of MoPac. And a new school site is planned on another Stratus tract further west, also along the pipeline's path. In light of those and other pipeline-related concerns in East Austin, Council Member Danny Thomas is proposing a pipeline safety ordinance that would require greater setbacks (possibly 600 feet) between certain new developments and all hazardous liquid pipelines running through Austin's jurisdiction. That, of course, could have a major impact on at least part of Stratus' development plans -- unless the council finalizes the agreement today. Thomas' ordinance, still in the hands of the legal department at press time, would likely not go to the council until Aug. 22, according to Thomas' aide Linda Dailey. Beyond that, Dailey said she didn't know how the ordinance would play out in relation to Stratus.

Given the flurry of changes and back-and-forth dealmaking in the days and hours leading up to today's meeting, you have to wonder if the City Council actually knows what it's going to be voting on. If Mary Arnold -- the environmental community's most skilled reader of fine print -- isn't able to keep up, who can? "The council has no business voting on documents that have not been finalized," Arnold said of the 11th-hour changes that preceded the council's first two votes. Nothing suggests things will be any different this week.

One way of resolving the confusion, Arnold says, is to release the final document for public review three days before the council vote. "That's an extreme minimum of three days," she said. "What I'd really prefer is 10 to 14 days." If council delays the vote for one week to allow the public to digest the final agreement, the proposal would return to the council dais on the 10th anniversary of the SOS ordinance -- not a pretty picture if the council continues its same 6-1 pattern. The Aug. 15 meeting is canceled, so the next available date would be Aug. 22 -- the day the proposed pipeline ordinance would be up for council consideration.

Arnold was one of eight stakeholders representing the environmental community in negotiations with Stratus. Now she's one of four ex-stakeholders aligned against the deal, along with SOS Alliance Executive Director Bill Bunch, Save Barton Creek Association board member Steve Beers, and environmental engineer Lauren Ross. Ross surprised the council last week with her flat-out rejection of the agreement; her main sticking point centered on Stratus' refusal to reduce its impervious cover levels in a way that would be proportional to its density reduction. In other words, if Stratus trimmed nearly one million square feet from its original plan (in exchange for $15 million in fee waivers), why, then, couldn't it shave off an estimated 26 acres of pavement? Arnold put that same question to the mayor's office last week, along with a long list of other detail-oriented questions. The answers have not been forthcoming.

One alternative proposal put forth from the opposition calls for council's approval of only one tract, the expansive Bear Creek PUD tract in far Southwest Austin, which is fully compliant with the SOS ordinance and has the support of the adjacent Appaloosa Run neighborhood. Opponents hope the council will delay action on the remaining tracts until a comprehensive neighborhood, environmental, and traffic plan is in place. The City Council has stated its intent to develop a regional plan for the area, but apparently not before Stratus becomes a done deal.