When Lauren Ross urged the City Council to reject the "half-baked" Stratus development deal, council members' jaws dropped one by one. 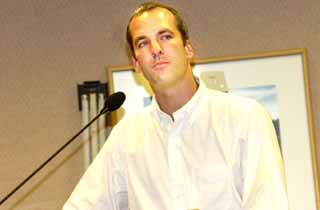 It's safe to say that City Council members didn't expect to hear anything they hadn't heard before during last week's (limited) public hearing on Stratus Properties. But when engineer Lauren Ross urged the council to reject the "half-baked" development deal, council members' jaws dropped one by one.

Until Thursday, most observers thought that Ross, an environmental engineer whose opinion often carries the weight of gold, was still a supportive stakeholder in negotiations with Stratus. The company is very close to finalizing a deal with the city on a 1,253-acre development in Southwest Austin. In an earlier opinion solicited by Robert Breunig, executive director of the Lady Bird Johnson Wildflower Center, Ross opined that the development plan would pose less risk to water quality than would development under the existing Save Our Springs ordinance. Breunig bought into the Stratus deal based in large part on Ross' opinion.

But on Thursday, Ross dropped a bombshell. "Table this vote," she told the council, "until we can craft an agreement that is more than half-baked, that has real enforcement, that reduces impervious cover, provides adequate setbacks from Longhorn and other pipelines, and, most importantly, is truly a community consensus." Ross choked back tears as she spoke. When she finished, the audience responded with loud cheers.

"Did you see the look on Toby's face?" one audience member asked incredulously, referring to City Manager Toby Futrell. "She looked stricken."

Nevertheless, the council plodded on as it had the previous week, voting 6-1 for the proposal, with Raul Alvarez maintaining his dissent. Opponents gained a wee bit of satisfaction only from the council's decision to hold off on its third and final vote until August 1.

In the meantime, Stratus, the city, and the environmental component of the stakeholder team (minus Ross) will continue nailing down the agreement, a process that may include a review of Longhorn pipeline safety and zoning issues raised by political consultant Mike Blizzard. In light of Ross' testimony, city officials will also try to get a handle on why the environmental engineer bailed out of the process.

Mayor Pro Tem Jackie Goodman voiced her disappointment in Ross' reversal. "A whole lot of people went into this and stuck with it based on the trust and reliance of not only our folks at the city, but also Dr. Lauren Ross. And so all along the way, when you're being reassured ... by all parties involved, all scientific evidence involved, including Dr. Ross, that you should continue to go forward with this because the degradation is less, and the protection is more than SOS ... and then you come to a hearing and all of a sudden your legs are cut out from under you, I think that's a significant blind-side that we need to check into," she said. "We would like to hear what that was all about."

Apparently, no one had bothered to inform the council or city manager that Ross had pulled out of the stakeholder process several weeks ago. "City staff, and Stratus, and other members of the stakeholder group, have known for weeks that I have not been on board with this deal," Ross told the Chronicle. She had tried to give Mayor Gus Garcia advance notice of her testimony, she said, but Garcia had not returned her phone call before the hearing. Simply put, Ross argued that the $15 million incentive package should have bought the city much more than a reduction in density. With $15 million in fee waivers at stake, Ross reasoned, the development should not simply meet impervious cover levels under SOS, but register well below existing requirements.

In her remarks to council, Ross accepted responsibility for being among those who encouraged the city to craft a deal with Stratus rather than risk far worse development in the Barton Springs Watershed. "In the language of protestants," Ross continued, "we asked Austin to subsidize Stratus. We made that request based on our experience with the Texas Legislature, the historical success of the Stratus lobbyists there, and the opinions of good legal experts that the city would likely lose a [legal] challenge ..."

Despite those harsh realities, Ross eventually began to question Austin's resignation to live within "the box." Strike back, she told the council. "We cannot allow corporations to create our world of law and politics. ... Please vote this deal down and work with all of us to create a world where law and politics at every level reflect the sacred value this community places on Barton Springs."

By the time Ross delivered her statement, Stratus CEO Beau Armstrong had already addressed the council and left the meeting, returning only after the council closed the hearing (over the objections of those not afforded the opportunity to speak) and began deliberating the deal. Armstrong's earlier comments were his first public remarks at a council meeting since the Stratus deliberations began June 27. The youthful CEO, dressed in jeans and a crisp white shirt, made one final attempt to distance himself from Freeport-McMoRan (Stratus' much-disparaged former parent company) and Jim Bob Moffett (Armstrong's former boss). Trying to dispel persistent rumors that Moffett still pulls the strings at Stratus, Armstrong said, "Like everybody, we all have a history ... but let me be clear about one thing: Jim Bob Moffett has nothing to do with Stratus Properties. ... At one point in time, he did. And I will apologize for some of the events that happened way back when. It's unfortunate, but believe me, there's no involvement by Freeport or Jim Bob Moffett in any way, shape or form." With that, Armstrong turned and left the podium. About a dozen supporters applauded.