The notorious Rio Motel shuffles into the sunset 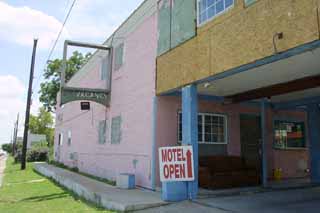 The facade of the former Rio Motel, now the Embassy (under renovation) (Photo By Jana Birchum)

Another Austin landmark has bitten the dust.

However, this one's demise has many neighbors dancing gleefully around the campfire, rather than sobbing nostalgically about the Good Old Days. 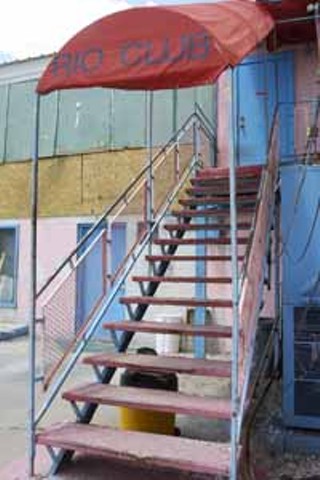 The entrance to the Rio Club, closed in 1999 (Photo By Jana Birchum)

The Rio, often described by local and even state authorities as a haven for drug users, prostitutes, and dangerous felons, is under extensive renovation by a new owner, who promises to run it as an upscale establishment, under a new name.

"'The Embassy,' it's called the Embassy," says Peter Patel, the new motel manager. His broken English cheerfully competes with the roar of the interstate and the intermittent wail of power tools attacking the motel's innards. "At night time it is silent now," he says, pointing to the parking lot hosting a lone minivan.

Patel had heard the stories about the rowdy Rio of the past decade: how club patrons at the motel's Rio Club mixed it up and partied with guests in the parking lot, forcing a constant stream of police calls over the years -- including some 300 arrests from 1996-99. The Rio's rap sheet included the arrest of a murder suspect, gunplay, and numerous crack-cocaine busts. Nearby residents -- who had to deal with the drunkards and drug users spilling out into the neighborhood -- complained, and matters came to a head in mid-1999 when the city sited the First Workers Corporation day labor site at 50th and I-35. Neighbors feared the day laborers would add yet another volatile element to the crime potential from the Rio.

Working with city of Austin officials, in August of 1999 Attorney General John Cornyn finally filed a nuisance suit to shut down the Rio permanently. The lawsuit, which forced Rio owner Greg Ying to post a $10,000 bond to remain open, never went to trial. At the urging of Austin police, Ying had already closed the main source of concern -- the Rio Club -- several months earlier, so officials were content to let him take the time he needed to sell the business, according to a spokesperson for Cornyn.

"Once they closed down the club, we saw a noticeable decrease in partiers in the neighborhood," says Fred Dupuy, president of the EYE-35 Neighborhood Association that borders the Rio to the west. "That was a big relief. But it never really started to get better. The area and condition of the motel remained pretty decrepit. And the only types of tenants they had were mainly people using drugs or selling drugs." 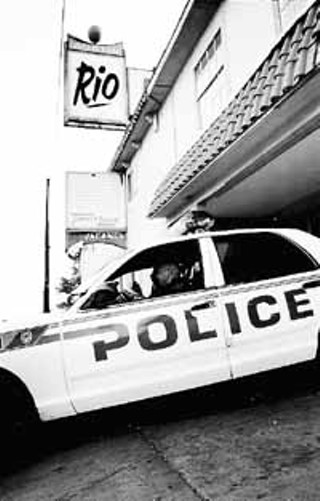 It took Ying almost three years to find a buyer. Hash Patel, a Dallas resident (and the manager's cousin) who owns three other Texas motels, including the Super 8 in Round Rock, finalized the purchase of the Rio in late March. He won't divulge the price, but the Travis County Appraisal District lists the property and motel at $685,000. Ying also declined to comment on the price, nor would he talk about the motel's past or future.

The new owner notes that he bought the place at a discount, but is investing a significant amount of money in its renovation. All the motel's four buildings sport new roofs. Some wings have been gutted, while others received a remodeling.

"You see this paneling," Peter Patel says, pointing at a series of walls stripped bare. "They had to spray roach medicine everywhere ... you know, pest control."

The owner, Peter Patel's cousin, is even more descriptive. "It was uninhabitable," he said in a phone interview. "It literally was amazing what these people lived in. There was human feces in there, in some of the rooms. Not dog feces ... human feces." Still, the owner is confident everything will be sparkling clean and ready for new guests in a month's time. "I've done similar ... with the Super 8 [in Round Rock]. It was a mess and we improved it greatly."

Hash Patel notes that he met with neighbors before he purchased the Rio, and says they remain opposed to any motel at the site. "But a hotel has been here so long," he says, and adds that all the neighbors will be invited to a grand opening to showcase the new building.

Peter Patel is confident the business will be a benefit as well and points out again the transformation that is taking place, including new paint colors. "No pink," he says. But as workers hand-scrape the pink paint from the stucco walls for the next month, someone somewhere, no doubt, will mourn the loss.

Down the Rio One Last Time

The Rio did have its highlights, from its earliest days as the Clear View Motel in the 1950s, a favorite of travelers to the old Robert Mueller Airport. As the Motel Rio Best Western and the Austin Travelodge, it played host to families on vacation in the Sixties and Seventies, before eventually sticking with the name, "Rio Motel," in 1978. The motel's Rio Club bar became a hot spot for police officers and pool players throughout the Eighties, but started its downward trend shortly thereafter. The cops returned, and not as customers.

Whatever the future holds for the establishment itself, the new name choice raises a question -- since the Embassy Suites Hotel is just up the highway, at 290 and I-35, will travelers confuse the two? An Embassy Suites manager who asked not to be named said they were surprised by the nearby namesake and were looking into the issue. Even the weariest travelers are likely to notice the difference in the two venues. At the Embassy Suites, palms line a 10-story atrium and waterway. A lone, dead palm graces the parking lot of the former Rio, its fronds dry and drooping in the midday sun.

Peter Patel isn't sure what will become of the palm. "People say, 'Cut it down.' But it's hard ... it's hard wood," he says, knocking his knuckles on the hairy trunk. Around him, the construction proceeds, and the face-lift erases the once unmistakable image of the Rio.