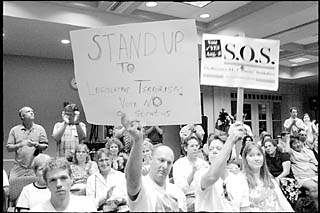 Stratus Properties and the city entered the final stretch of negotiations this week, with both sides still in dealmaking mode as the Chronicle went to press. At last call, the city and the developer were moving closer to settling how Stratus would be compensated if the city ever decided to downzone the property, returning some or all of the tracts to their original rural residential status. Earlier in the week, Stratus agreed to remove the second of two proposed gas stations from the development. -- Amy Smith

U.S. District Judge Sam Sparks heard opposing arguments last week from attorneys for the city of Austin and Longhorn Partners Pipeline. The city, joined by the Barton Springs/Edwards Aquifer Conservation District and two landowners, wants the court to order an Environmental Impact Study for the pipeline before Longhorn proceeds with plans to ship gasoline and other fuels through South Austin within the next month. Attorneys for the plaintiffs argued that the federally approved environmental assessment of the pipeline was not exhaustive enough to guarantee the health and safety of neighborhoods, schools, and the hypersensitive Barton Springs recharge zone of the Edwards Aquifer. Attorneys representing Longhorn and the federal government counter that extensive mitigation measures were made on the line to ensure the safety of residents and the environment. It's uncertain when Sparks will decide the matter. -- A.S.

Mayor Gus Garcia this week released the city's latest timeline for closing the aging, controversial Holly Power Plant. The Eastside facility, a source of fear and anger for its primarily Mexican-American neighbors for decades, was originally to be shut down entirely by 2005. To that end, two of its four generators were shut off in 1998 -- only to be reactivated the following year, due to the booming city's escalating power demands. At that point, the city pushed forward Holly's last hurrah to 2009, and in line with that deadline Garcia and Council Members Raul Alvarez and Danny Thomas announced that those same two generators will go off-line by 2004. Since 1999, Austin Energy has added several hundred megawatts of capacity with the construction of the Sand Hill plants near the airport. -- Mike Clark-Madison

Spurred by growing concern over access to and funding for local health-care services, Mayor Garcia and Travis County Judge Sam Biscoe have announded the creation of a joint city/county committee to develop a plan for a hospital/health care district. For now, the group is planning for Travis County, but would expand the district to include other contiguous counties if that's what they and their voters want. The plan could appear on the election ballot as early as November 2003 -- a year later than what many supporters of the concept wanted, including Probate Judge Guy Herman. Herman is one of 22 members of the committee, which includes community leaders, health-care professionals, and city bigwigs such as City Manager Toby Futrell and Council Member Betty Dunkerley. -- L.A.

University of Texas at Austin President Larry Faulkner announced July 16 that the university is dropping its proposed infrastructure charge that would have added $150 per semester to student tuition bills, after Texas AG John Cornyn determined that the fee addition did not pass legal muster. Intended to fund critical repairs, renovation, and capital construction needs, the fee would have provided $11.8 million in revenue over the next year, climbing to $33.6 million in the next five years, UT officials said. Cornyn said the proposed fee duplicated a building use fee first introduced in 1969. -- Jordan Smith

Roberta Crenshaw, Austin's longest-serving queen of parks advocacy, will receive special recognition today (Thursday) with the naming of the Roberta Crenshaw Walkway -- the MoPac pedestrian crossing on the Town Lake Hike and Bike Trail. Crenshaw's lifelong dedication to the great outdoors is evidenced throughout Austin, particularly along the Town Lake trail. Additionally, Crenshaw was one of a trio of women who led a successful legal battle almost 20 years ago against a planned development on what was then city-owned property, just north of Town Lake. Part of that area is still slated for development -- and Crenshaw is still fiercely opposed. The ceremony, which will include the unveiling of the walkway's sign, takes place at City Council at 2:30pm today (Thursday) in the Hancock Building at the Lower Colorado River Authority complex, 3700 Lake Austin Blvd. -- A.S.

DrKoop.com, the Austin-based health information Web site founded by former U.S. Surgeon General C. Everett Koop that was once worth more than a billion dollars, was sold on Monday -- for $186,000. The protagonist of one of the epic tales of Internet boom-and-bust, DrKoop.com was launched in 1997, went public in 1999, went bankrupt in December, and was finally bought by Vitacost, a privately owned Boynton Beach, Fla., health-products company. -- Lee Nichols

Come autumn, KOOP Radio will be looking for new digs -- preferably more spacious than their current locale at 304 E. Fifth, says the station's office manager, Angela Keaton. A few weeks ago, it seemed that KOOP would have to move sooner, due to an elevator that wasn't code-compliant. The owner, Texas Funeral Commission chairman Harry Whittington, claimed he couldn't afford to install a new lift, but Keaton says she successfully appealed to the Texas Department of Licensing and Regulation for an extension. The station hopes to move by late this year, she added. -- L.A.

Consultant Richard Fawal is headed for Washington, D.C., as the new national political director of the Arab American Institute, a nonprofit political and advocacy group. Fawal, who co-founded Grassroots Solutions with Mike Blizzard nearly three years ago, will leave Austin at the end of the month. As for Blizzard, he expects to tie the knot soon with consultant Jeff Heckler. The two are discussing merging Grassroots with Heckler's Solutions Group to provide a wider mix of services to include strategic consulting, advertising, Web advocacy, grassroots lobbying, and phone banking. -- A.S.