Rick Perry's "massive, massive suggestion" would be up to 1,200 feet wide -- the length of four football fields -- and take 50 years to complete.
Courtesy of Texas Department of Transportation

A history lesson from the Texas Department of Transportation: "Well-constructed roads and bridges held the Roman Empire together. The inability to expand and maintain that transportation system was one of the key factors that brought about the empire's eventual collapse." There was also that decadence factor, not a problem in Gov. Rick Perry's Texas-under-God. Nor will Texas forego its imperial destiny ("Crossroads of the Americas") because of bad roads. Last month, the Texas Transportation Commission adopted a 95-page prospectus for Perry's Trans Texas Corridor, a 4,000-mile web of new roads and rail lines "designed to move people and goods faster and more safely than ever before." (Get yours on the Web at www.dot.state.tx.us.)

Perry first pitched the Corridor -- expected to take 50 years to complete -- back in January to spur campaign excitement, though he now says he doesn't want it to be a "partisan" project. Perry's opponent Tony Sanchez calls it "a massive, massive suggestion," but also said he would likely take the project over, rather than shut it down, if he's elected. If he's not, Perry plans to find "seed money" in next year's deficit-ridden state budget and push legislation that would let TxDOT actually execute the plan. (Among other things, under current statutes, TxDOT can't build or operate rail infrastructure.)

Meanwhile, TxDOT wants to begin environmental review in January on the four "priority" routes -- from the Metroplex past Austin (incorporating SH 130) to Laredo; from El Paso to Beaumont (again past Austin); from Dallas to Houston; and from Brownsville via Houston to Texarkana, the oft-proposed and oft-delayed I-69 route. (Many Valley leaders would rather see I-69 not join the Corridor and, above all, not be a toll road.) Each quarter-mile-wide Corridor route would hold separate toll lanes for cars and trucks, high- and low-speed freight and passenger rail, and easements for both fuel and water pipelines. 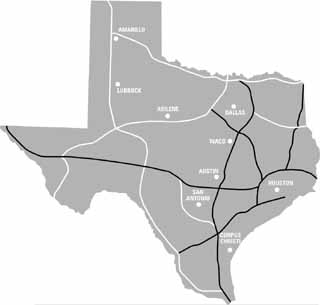 The current price tag is $183.5 billion, an unlikely bargain considering SH 130, with a much narrower right-of-way (some already state-owned) and no multimodal elements, is budgeted at $11 million a mile. As it is, TxDOT can't afford to build two-thirds of its current projects, let alone the Corridor. The agency plans to make all new highways in Texas (including the Corridor) toll roads, with higher tolls than ever before. TxDOT would collect the tolls (to support itself) in perpetuity, long after each highway's bonds are paid off, despite state laws expressly prohibiting this. Reconstruction projects on existing roads -- for instance, I-35 through downtown Austin -- have been delayed for generations.

But the Corridor is different, you see. Along with tolls, new federal funding, and TxDOT's still-in-limbo "regional mobility authorities" (which fob state highway debt off to cities and counties), the state invites investors to build and operate Corridor segments as concessions -- using SH 130 as a model -- and invites landowners to accept royalties instead of selling right-of-way outright. Such concessions are employed in Europe, TxDOT says, with some success. (Accent on "some." The recent collapse of the UK's Railtrack concession goes unmentioned.) And, of course, "government [would] benefit from private-sector efficiencies, innovation, and expertise."

Perry's man on the TTC, Ric Williamson, says he expects the first four corridors to be "100% privately funded." On Monday, Perry announced with great fanfare the first concession proposal: basically an extension of SH 130 north to the Red River. The TCC is a long way from actually approving this or any corridor build-out scheme, but the political point was made. The state expects more private-sector interest now that the details have become fleshier. TxDOT's doing its best to create buzz, calling the Corridor "the biggest engineering project ever attempted in Texas." (NASA may disagree.) "The Trans Texas Corridor sounds futuristic," says TxDOT's Steve Simmons, "and it is."

Actually, it sounds anachronistic -- bigger, broader, faster highways paid for with someone else's money, a transportation strategy that has failed to work for Americans since at least the Erie Canal. (There's a reason we pay gas taxes.) But that hasn't stopped the Texas Public Policy Foundation, its pseudo-scientist road warrior Wendell Cox, and other highway hos from popping the champagne. After comparing the Corridor to the lunar landing and the fall of communism, Cox writes in a TPPF "commentary" that Perry "has articulated a vision that can transport Texas and its people to a better future. It is likely that within months other governors will offer similar proposals."