Hundreds of citizens turn out to denounce the proposed Stratus deal. 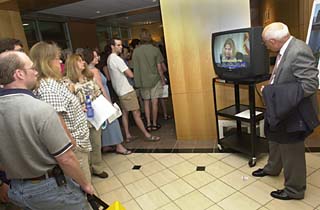 Citizens watch the City Council meeting while waiting in line to be admitted to the Stratus hearing. (Photo By John Anderson)

Fresh from a decade-long hiatus, local activism is making a comeback. That was the view from the floor at last Thursday's public hearing on a proposed development agreement with Stratus Properties. Until last week, the city and the local daily had tried to spin the deal as a settlement that came together through community consensus, save for a few environmental extremists. But a majority of the more than 700 citizens who turned out for the hearing put the kibosh on that assessment.

The June 27 City Council meeting will be memorable, not just for the huge attendance, but for the confusion. The 110-capacity venue -- the council's temporary chambers at the Lower Colorado River Authority complex -- was far too small; the city clerk ran out of sign-up cards early in the evening, and Mayor Gus Garcia was feeling jet-lagged and out of sorts, having just returned from Europe. In fact, the only thing that went smoothly that evening was the well-orchestrated presentation by city staff and Stratus, which lasted two hours. By the time the hearing got under way -- about 9pm -- several families had already gone home to put the kids to bed.

In all, it was a good show, punctuated by whoops and hollers, several thwacks of a gavel meant to restore order, and an updated version of Bill Oliver's "Barton Springs Eternal." Some of the evening's highlights -- there were too many to name here -- included Council Member Daryl Slusher's heated response to Save Our Springs Alliance leader Bill Bunch: "Anybody that doesn't agree with you on any point, even on the point of whether you ought to talk for 30 minutes or 40, [you accuse them of] not wanting to protect Barton Springs!" Similarly, Bunch raised City Manager Toby Futrell's ire with his criticism of how the Stratus deal came together. Bunch hastily tried to make amends, telling Futrell: "A lot of folks, myself included, are extremely pleased that you are our city manager, and that you're very different from the previous city manager ... and there are significant improvements in communication ..."

The hearing lasted until just shy of 3am, and will continue on July 11 with council's anticipated vote (the first of three) on the proposed agreement and zoning changes. Meanwhile, the deal is undergoing another once-over. "The staff and some of the council members are working to see how we can make the plan better," Garcia said. "I want the council to be able to deliberate the issues thoroughly at the next meeting. We have to make a decision, up or down."

As for Stratus, CEO Beau Armstrong says he's continuing negotiations with residents opposed to some proposed apartments adjacent to their neighborhood. "I think apartments are an important part of a community," he said. "I grew up in an apartment with a single mother. I can only think they don't want their children mingling with future developers."

An odd mix of suburban homeowners, old activists, and fresh-faced aspirants are aligned in their opposition to a development that would bring 1,730 more homes and an additional 1 million square feet of commercial space to the Barton Springs Watershed, where Stratus owns a checkerboard of tracts covering 1,253 acres. If this agreement is approved, the city would forgive $15 million in development fees and Stratus would agree to a scaled-down version of what the company claims it can rightfully build under current state law. (SOS and the Circle C Neighborhood Association have filed a lawsuit arguing that the SOS ordinance should trump the state "grandfathering" statute.)

On the other hand, Stratus proponents insist that the plan is "better than SOS" because the development will be "clustered" in order to preserve five of the 15 tracts, for donation to the city and the Lady Bird Johnson Wildflower Center. Theoretically, the cluster approach can be an effective environmental tool and is allowed under the SOS ordinance. But Bunch and others argue that clustering should occur on a tract-by-tract basis -- building homes closely together, for example, to provide an expanse of green space on the remainder of the tract. The Stratus method would leave some tracts completely undeveloped while exceeding impervious cover limits on others. Ironically, some of Stratus' densest developments are planned for along the Longhorn gasoline pipeline.

Opponents of the proposal are urging city leaders to halt further action on the Stratus case pending a comprehensive neighborhood plan for the Southwest region. To date, 28 neighborhood and environmental groups support having a plan in place before Stratus moves forward. Circle C NA President Amy Rupp told the council that Southwest Austin residents have tried to be involved in neighborhood planning, but city staff told them that the city's core neighborhood groups would take priority in the planning process. "Why not now?" Rupp asked. "Isn't some of the most controversial development where we live?" John Larkin, president of the Cherry Creek on Brodie NA, expressed a similar sentiment: "We've got development driving planning rather than a comprehensive neighborhood plan guiding development."

The hearing also evolved into debate over the odds of winning a lawsuit contesting HB 1704, the state law that allows builders to develop under pre-existing rules. Bunch's position is that the city should sue, although a fair number of lawyers have advised the city against it. Others claim that SOS itself should have launched the legal battle two years ago, but there are conflicting accounts from board members on the advice they received from attorney David Frederick. Some say Frederick advised them that they didn't have a strong case, while others say Frederick told them that a lawsuit would be far too costly and time-consuming for a nonprofit organization. At the time, SOS was strapped for cash and experiencing a good deal of infighting among board members.

The city manager, to her credit, did make one final attempt last week to obtain another legal opinion -- from attorney Renea Hicks, who is well respected in the environmental community. Hicks, however, wasn't expecting to be called on to explain his position. "I really hate giving my legal analysis in front of the world," he said painfully. In any case, Hicks disagreed with Bunch's argument that a lawsuit can be won based on the threat of "imminent harm," which is a provision in the existing state law. "The very purpose of SOS was to prevent what I call the slow death of the aquifer, not the imminent death but the slow death -- it's the death by a thousand cuts," Hicks said. The "imminent" threat, he continued, "is a legally weak position to take. It's not crazy, but it's a legally weak position to take in terms of anticipating success with a lawsuit."

Bunch responded that while he has "enormous respect" for Hicks, he doesn't agree with his analysis. "If you're going to die from a thousand cuts, you're still going to die," he said. He pointed to federal regulations on flood control as an example of imminent death. The laws, he said, "are protecting property from a flood that only happens once in a hundred years. Now, if that's the kind of threat that fits the definition of what's imminent, then the death of Barton Springs, in the space of a blink of an eye, one decade or two, certainly that's imminent."

That was hardly the last word; in the end, an estimated couple of hundred speakers were left unheard, and will be called on July 11, before the hearing is closed, and council proceeds to a vote.