Stratus Properties plans to develop 1,253 acres in the Barton Springs watershed, but the Save Our Springs Alliance believes state law prohibits their lofty plans. 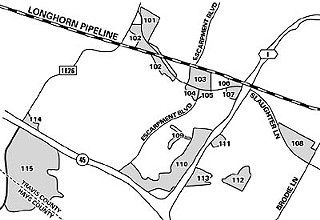 Stratus Properties is proposing various mixed-use developments on these 115 tracts (1,253 acres) in the Barton Springs watershed of Southwest Austin. The zoning issue and a city/Stratus-negotiated development deal goes before City Council tonight (Thursday, June 27) for a 6pm public hearing. Several neighborhood and environmental groups oppose the plan. Residents who live near tract 103 are especially concerned about the proposed apartments and retail space adding more density to an environmentally sensitive area that's already facing the prospect of the Longhorn gasoline pipeline. Development on the 103 site, along with tracts 106, 107, and 110, would exceed impervious cover limits (a gas station is planned for tract 106). In exchange, Stratus will give tracts 104 and 105 to the city, and tracts 111-113 to the Lady Bird Johnson Wildflower Center.

A Save Our Springs Alliance lawsuit against the city and Stratus Properties could further delay final action on a proposed development deal that has been in the works for a couple of years. At a public hearing on the Stratus agreement and zoning case tonight (Thursday), the City Council is expected to cast a first-reading vote on the matter. A final decision will come some time in July, although the lawsuit, filed Monday in Travis County district court, may hold things in limbo until the fall.

The Circle C Neighborhood Association has joined SOS in the suit. The Save Barton Creek Association voted to join the suit Monday, but later withdrew after taking a poll of all board members. Attorneys for the plaintiffs argue that the city's SOS water quality ordinance should be exempted from HB 1704, the state law that allows developers to build under pre-existing rules. They point to a provision in the "grandfathering" statute that would disallow a development if it threatens to cause "imminent destruction of property or injury to persons." In this instance, attorneys assert that the SOS ordinance was written "for the specific purpose of preventing imminent loss of Barton Springs, Barton Creek, and the Barton Springs Edwards Aquifer District." Moreover, they argue that when the city approved the creation of Municipal Utility Districts in the 1980s, the agreements called for all developments within each district to "comply with the applicable special watershed ordinances, as amended from time to time."

Austin attorney David B. Brooks, one of the state's leading experts on city and county law, is a co-counsel in the lawsuit with Bill Bunch and Amy Johnson. In addition to his legal practice, Brooks advises a special House committee charged with revising the state constitution. Brooks said Bunch had asked him to look over the various documents on the Stratus case to determine if the environmental group's claims would stand up in court. "I am of the opinion that the legislation [HB 1704] does not set aside the SOS ordinance and that the SOS ordinance is effective and enforceable," Brooks said. "It's that simple."

The outcome of the lawsuit will have far-reaching significance for Austin, said Johnson, a longtime environmental attorney. "This is a very important case because the issue of application of the SOS ordinance has a huge effect on what the future of development looks like over the aquifer," she said. The city's outside legal counsel, Casey Dobson, who negotiated the Stratus agreement, declined to comment on the lawsuit before first consulting with city officials.

Meanwhile, Southwest Austin residents and local environmentalists are hoping to generate a record turnout at City Council tonight in opposition to the proposed rezoning and development deal, which lays out how Stratus subsidiary Circle C Land Corp. (also named in the complaint) will develop 1,253 acres in the Barton Springs watershed. A coalition of Southwest Austin homeowners is especially irked by the city's willingness to approve a development that includes one million square feet of office and retail space and 1,730 residences in an area already fraught with major traffic problems, water quality concerns, and the threat of a proposed gasoline pipeline. They want a comprehensive neighborhood plan in place before the city approves the project. Tonight's hearing is at 6pm at the Lower Colorado River Authority headquarters, 3700 Lake Austin Blvd. A citizen sign-up sheet topping the 800 mark could rival the historic public hearing 12 years ago that led to the outright rejection of a massive development proposal put forth by Stratus' successor, Freeport-McMoRan.

Today, Stratus claims "grandfathering" rights on development plans that first got under way in the mid-1980s, several years before the existing 1992 ordinance. The proposed deal would give Stratus a $15 million incentive package of waived fees and assessments, and water and sewer services. Stratus would also use a "bucket" approach in complying with SOS impervious cover rules, which means exceeding impervious cover limits on some tracts (see tracts 103, 106, 107, and 110 on map), complying with or going under the limits on other parcels, and donating still other tracts to the city (104 and 105) and the Lady Bird Johnson Wildflower Center (111-113). Stratus has also agreed to use native landscaping, which reduces the need for fertilizer and pesticide use, and employ the highest standards of green building practices throughout its development.

What the city gets in exchange is certainty. Dobson believes the agreement is the best route the city can take given what might happen if the proposal is rejected. "I don't know what the future holds if we don't settle, but it is highly unlikely the land would stay [zoned] at rural residential," Dobson said.

Circle C NA President Amy Rupp has been an outspoken opponent of the development proposal, while the politically influential Circle C Homeowners Association board supports the deal because it won a number of concessions in negotiations with Stratus. "They had two years to negotiate in private and everyone else had about two months," Rupp said. The alliance between SOS and Circle C residents is noteworthy given the homeowners' past wariness of environmental activists -- largely due to the enviros' long-running war with the man behind Circle C, developer Gary Bradley. But over the past two to three years, SOS has strengthened its ties to many Circle C residents and other suburbanites who feel hamstrung by the domino effects of development and the accompanying traffic.

Homeowners in the New Villages at Western Oaks, closest to Tract 103, believe they got the raw end of the deal in the Stratus agreement. They're concerned that Stratus is exceeding impervious cover limits, by nearly twice the allowable amount, to build new apartments and retail space near the Longhorn pipeline route, thus adding more people and density to an area that would suffer major consequences in the event of an explosion. At press time, the homeowners were considering a new setback offer from Stratus to increase the distance between the pipeline (New Villages' southern boundary) and the proposed new apartments. On the whole, most New Villages homeowners would prefer no development at all in their backyards or, at the very least, one that would comply with SOS. "The pipeline and the new development are like a double blow to all of us," said Stephani Stone, president of the neighborhood's homeowners association. "I knew the pipeline was there when we moved here, but at the time it was dormant. A lot of residents figured that either the city or Judge [Sam] Sparks would stop it." Longhorn has won federal clearance l to operate the pipeline and, despite a pending city of Austin lawsuit, plans to begin piping gasoline July 31.