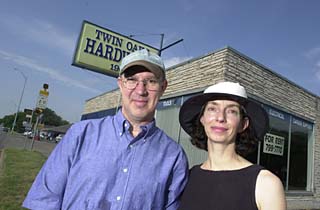 In Magnolia Cafe's early days on South Congress, the only source of neighborhood color seemed to come from the drab tones of disillusioned hookers and winos languishing along the avenue. The scenery didn't especially hold the promise of success for a business branching out from its home base on Lake Austin Boulevard to a second location in South Austin.

Eventually, though, the street characters thinned out, largely due to community outcries and routine police raids at the nearby Cinema West porn house, prompting the theatre owners to move to friendlier territory next to I-35. After that, Magnolia owners Kent Cole and Diana Prechter began setting their sights on other real estate opportunities in the Bouldin Creek neighborhood. Recently they landed a big one -- the near-sacred Twin Oaks Hardware building, which they bought when Harry and Donna DeFoy closed shop and retired last month. The purchase, from C&B Investments, literally made Cole and Prechter the owners of the entire block -- from Magnolia to Prima Dora (a gift shop Prechter owns) to Twin Oaks.

The new owners aren't looking for just any tenant to occupy the 5,100 square-foot building. "I think some of my neighbors would kill me if I put a Starbucks in here," Cole said, laughing. "I'm not really a corporate basher, but a Starbucks would probably be my last resort. Here we have a rare opportunity to choose a tenant who would enhance the vitality of the neighborhood -- to make this area more of a destination point." At the same time, Cole wants to have a hand in providing a pedestrian extension from his 1900 block of Congress to what lies a few blocks down the road, toward the river -- the eclectic strip of storefront businesses run by some of Austin's most imaginative entrepreneurs.

As in any other popular neighborhood on the go, the rent on South Congress doesn't run cheap. Cole is asking $7,500 a month, which includes property taxes and insurance. He says he's contacted a whole range of suitable prospects for the Twin Oaks building: bookstores, record shops, wine and cheese nooks, toy stores, grocery stores, and even other hardware shops. "I could rent the space out easily to a tenant that doesn't get much foot traffic, but what we're trying to do is keep the street on a much more human level."

The grocery store Cole is especially interested in is Wheatsville Food Co-op. Throughout its long and storied history, the store has managed to survive a series of financial setbacks, and is now studiously mapping out plans for a second location -- preferably south, where a fair number of its membership resides. There are a couple of drawbacks to the Twin Oaks location, though: One, it's about 2,000 square feet smaller than what the co-op would need. And two, Wheatsville doesn't want to jump the gun on a plan that may take two or three years to materialize. "Ultimately we do want to grow, especially in a place where people want us," said store manager Dan Gillotte.

Gail Armstrong, owner of Off the Wall and president of the South Congress Avenue Merchants Association, would prefer to see another hardware store move in to the place. "I miss Twin Oaks and I miss Harry and Donna," he said. "I was in there two or three times a week picking up whatever I needed." Yet Armstrong applauds Cole's efforts to search for a neighborhood-friendly tenant. "It would be nice to see something in there that would help extend the walk [from the strip] further south," he said.

Of course, there's two old South Congress fixtures that sit between Magnolia and the popular shopping strip -- Hudson's Smokey Ridge Sausage and local mainstay Fran's Hamburgers. Neither professes to be a pedestrian destination draw. Fran's is a drive-in joint, and Hudson's is where hunters haul their deer for processing. But South Austin wouldn't be the same without them.

One of the neighborhood's more innovative entrepreneurs, chef Lou Lambert, who recently opened Lambert's restaurant on South Congress, has his hopes set on an ice cream shop at the Twin Oaks building. "Oh, I'd be over there every day if that happened," said Lambert, who lives mere footsteps from Magnolia Cafe. "Or a newsstand -- we could really use a newsstand in the neighborhood." At any rate, Lambert says he trusts Cole and Prechter's tenant-selection sensibilities. "They're in this for the long haul," he said. "They're not just concerned about their business, they're concerned about the community."