The police shooting of a mentally ill East Austin woman has officers defending their actions and critics raising eyebrows. 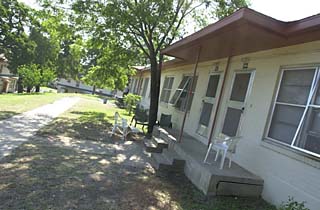 2105 Rosewood: the site of the shooting (Photo By John Anderson)

The morning of June 11 was not the first time Austin police had been called to Sophia King's home. A 23-year-old mother of two, King had a history of mental instability, and of causing disturbances. Neighbors in the Housing Authority of the City of Austin's Rosewood Avenue project, where she lived, often complained to the Austin Police Department.

In fact, the cops had visited King's house the previous night, in response to a complaint that her music was too loud. According to APD, the three officers who arrived at King's apartment the following morning found King highly agitated; she'd already thrown numerous articles of clothing and items from her kitchen onto the lawn. A housing authority employee stood by the pile, taking pictures for the agency's files. King wouldn't talk to the two officers who came to her front door, but went inside, slammed the door behind her, and denied them entry.

Meanwhile, Officer John Coffey, a 16-year department veteran, had stationed himself in the project's courtyard, on the rear side of the property. Suddenly, officers said, King ran out the back door armed with a butcher knife, and headed toward the HACA employee (whose name has not been released), who tripped and fell. According to APD, "King then stood over the employee and raised the butcher knife." In attempting to stop King's aggression, Coffey fired his weapon once -- striking her in the heart and killing her almost instantly. She was pronounced dead at the scene.

Police were shaken, yet certain they'd done the right thing. Nevertheless, King's family and a throng of East Austin activists are outraged. The officer didn't need to kill King, they argue, and didn't do enough to de-escalate the situation before it turned deadly. But what else could the cops have done? And who, really, is to blame?

It was an unfortunate incident, but strictly by the book, said Austin Police Association President Mike Sheffield. "Obviously the intent was to stab [the HACA employee]," Sheffield said. "Officer Coffey was faced with a split-second decision. Do you hesitate to see what is going to happen, or do what you've been trained to do -- save a person's life? Not only was Coffey's decision "courageous," Sheffield said -- it was "the only decision he could've made."

But with APD in a self-imposed muzzle, pending an internal departmental investigation and an independent Travis County grand jury investigation, the community's anger steadily grew. Why didn't the department send out a specially trained officer from the mental health unit to respond to the call and attempt to de-escalate the situation first? they asked. King wasn't even armed when she was shot, many neighbors and activists charged.

"That did not happen [the way the police said]," said Texas Civil Rights Project director Jim Harrington. "There is not one person in that whole complex that will say anything other than '[King] didn't have a knife.'" The knife, Harrington insists, was among the pile of things King had thrown out of her residence, and police found it later and used it to "get their stories straight" about how the shooting occurred, he said.

Nelson Linder, head of the local chapter of the NAACP, also asserted that witnesses at the scene said King had no weapon when Coffey shot her, but he was slightly more diplomatic. "We want an inclusive investigation where everyone is talked to," he said, adding that the NAACP will conduct its own concurrent, yet independent, investigation of the incident.

Sheffield says allegations that King was unarmed are baseless. Had Coffey not fired his weapon, the situation likely would have worsened. If King had stabbed the employee, wouldn't the cops then be accused of not preventing a murder? If she'd stabbed the HACA employee and then been shot, two people might have died. Coffey's response prevented further tragedy, Sheffield says.

"The time for intervention, as some have suggested, was over," he said. "The time for any of those other options was gone in a split second. There was no other option except to shoot, to save [the HACA employee]'s life." According to a well-known principle within law enforcement known as the "21-foot reactionary gap," in the time it takes an officer (whose gun is holstered) to respond to a suspect armed with a knife, the suspect can move forward at least 21 feet. Suspects who advance threateningly with a knife likely will be shot.

"The question is, where was [King]'s caseworker?" Sheffield asked. "Where was the follow-up? Where was anything," aside from the police? Though they disagree on most points, Sheffield and Harrington both believe King somehow fell through the social services net that should have been monitoring her illness. Although King's mother could not be reached for comment, it has been widely reported that King suffered from schizophrenia and had been committed to the Austin State Hospital on at least one occasion: last October, on a request for emergency commitment instigated by one of the three Austin officers who responded to the June 11 call.

And Harrington's assertion that APD officers are under-trained doesn't sit well with department officials. Each cadet receives six hours of mental health training in the academy, said APD spokesman Paul Flaningan, and officers who've been on the force two or more years can earn certification through a more advanced training course. APD currently has 97 patrol officers with advanced certification and 13 additional officers in training. One of the three officers that responded on June 11 was a certified mental health officer. "That's what we've said, we would've liked to have been able to intervene," he said. "An officer was there who had prior dealings with her and who knew about her mental state. But the scene unfolded so quickly, that was not able to occur."