A-Train in Vain: Is it too early to forget light rail and try something else? 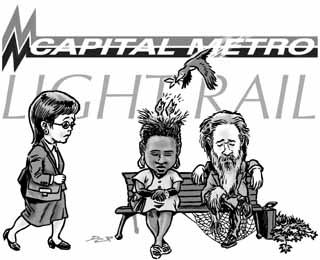 Though Capital Metro tried hard to act like it was a momentous event, nobody is acting too surprised -- or disappointed -- that the transit authority won't mount another light-rail referendum until 2004. But rather than nod solemnly and agree that it's too early to try again, we feel compelled to ask: Is it too early to give up and try something else?

Gasps from the audience. Hey, if The American President now thinks global warming exists and is caused by people and not livestock, then the Chronicle, Capital Metro's only friend in Austin media for years, can broach the question. We are not convinced that light rail is dead -- nor were we ever convinced that 54 miles of rail from Del Valle to Leander and Buda to Round Rock is the best, or only, way Cap Metro can do the job it was created to do.

A streetcar system may be -- probably is -- the best solution for some corridors, but it is not the only form of public transportation worth Austin's public investment, and our commitment is to a well-run, fully funded, efficient public transit system, not to a shiny new train. But if Cap Metro needs voter approval to do even a limited rail system, then we support their cause. We think we've said this all along.

Certainly, a referendum this November would have been likely to lose. Rail supporters -- notably the tech titans who bankrolled the 2000 campaign -- are not engaged and not as wealthy anymore. The more political have their eyes on the Democratic prizes, both local and statewide, in the November election; a rail vote would simply siphon money and labor away from the Dream Team and its local cheerleaders. Meanwhile, rail foes would need not even run a proper campaign -- they can just piggyback on Cap Metro detractor-in-chief Gerald Daugherty's run to replace Todd Baxter at the courthouse, and on Baxter's own run to unseat state Rep. Ann Kitchen. Putting rail on the same ballot as Daugherty -- who, we suspect, is running for commish solely to claim the Travis County seat on Cap Met's board -- would have been nine kinds of stupid.

But what will be different in 2004? There will always be a permanent GOP opposition to rail, people like Daugherty and Baxter and state Reps. Terry Keel and (at times) Mike Krusee, who want not just to derail the train but to take Cap Metro's money (which is really Austinites' tax money) away, use it to build highways, and leave Austin with a permanently substandard bus service, because, you know, Texans won't get out of their cars. We believe the technical term for this is "self-fulfilling prophecy."

So is the shibboleth we find in places like the Statesman, and surprisingly acquiesced to by Cap Metro's own leadership -- that the transit authority still "needs to rebuild trust" in the community. The daily editorializes that Austinites still haven't forgotten the scandal-ridden Cap Met of the mid-Nineties -- which of course they haven't, because the Statesman brings it up every time they write the words "Capital Metro."

People have already forgotten scandals -- much bigger scandals, and more recent ones -- at the county and at Austin ISD. But Capital Metro has a higher bar to clear because the Daugherty dogma -- that public transportation (except for the hardest cases among us) is dispensable, while highways are essential -- is more widely believed, and thus more in need of refutation, than many in Austin want to admit.

Austinites and their leaders of all stripes, bowing to the local god of accountability, have turned what was (like all "authorities") supposed to be an independent agency, insulated from political pressures (think LCRA), into a hostage of the most extreme political pressures borne by any local government. At some point, Capital Metro will need to make a case not for rail but for itself. It (and we who support it) must demand the right to keep its full one cent of sales tax for transit, as the voters authorized in 1985, whether or not it builds rail, and not continue to try to reason with its enemies. We don't think all that's gonna happen between now and 2004. We hope we're wrong.

The longer Cap Metro waits, and the worse Austin's growth-clogged mobility gets, the easier Daugherty's sloganeering becomes. By 2004, light rail will cost even more, and do even less to get cars off the roads. Unless Capital Metro starts from zero with a completely new message -- light rail is about redevelopment and changing land use and making a greater city, not about clearing the traffic jams on MoPac right now -- we fear it is locked in a political vortex from which it cannot escape.

But that means Cap Metro will need to rely even more heavily on Austin City Hall than it already does, since only the city can do what is needed to make urban redevelopment an attractive justification for rail. The city had just begun corridor planning during the run-up to the 2000 vote. It is still barely off the ground. Money is a problem, though a lack of political will cannot be discounted.

Right now, City Hall barely has the bucks to plan, let alone to follow on with a bona fide urban reinvestment strategy -- where the city and its citizens decide what they want to see built along rail corridors and then find developers willing to do it, instead of the other way around, which never works in Austin because nobody likes developers. Simply saying that rail will spur Smart Growth -- i.e., that it will help developers come in and screw your neighborhood, while the city and Cap Metro watch -- is how the A-Train ended up with mortal enemies in Central Austin. Again, we think little of this will change by 2004. And again, we hope we're wrong.

And if we're not? Then we should start giving serious thought to a Plan B. Get state and federal funding for a commuter rail line to bring suburbanites downtown. Invest Cap Metro's money (not just half of it) in putting buses every five or 10 minutes (not every half hour) on every major street in the urban core (not just on Lamar and Guadalupe and Congress) and streetcars on the few corridors where that just ain't enough. And explore public-private deals, or even straight-up private concessions, for special shuttles to major employers and other commuter routes. We know all the reasons why this may not be as efficient or fiscally prudent as building rail. We also know that people would probably support it.