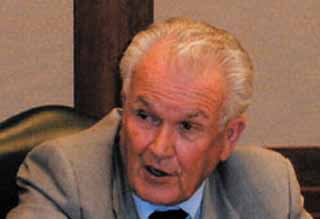 In a decision handed down May 30, the Texas Supreme Court unanimously ruled that employers can settle workplace disputes by forcing employees to forgo their right to sue for discrimination or other claims. The ruling has fueled labor leaders' claims that the court's nine justices are bought and paid for by corporate interests. Meanwhile, business leaders claim it could become an effective tool -- especially for small businesses -- to minimize legal costs incurred during labor disputes.

Thursday's decision sprang from an age-discrimination lawsuit filed by James Myers, a 30-year veteran of Brown & Root -- a construction company owned by Houston product and service provider Halliburton. In November 1997 Halliburton (then still under the corporate tutelage of CEO-turned-Bush Veep Dick Cheney) sent employees notice that the company would resort to using binding arbitration, by which independent mediators are brought in to hear disputes and issue rulings by which both parties must abide. Continuing work after the effective date of Jan. 1, 1998 meant an employee accepted the new requirements. Myers stayed on, but after being demoted later that year filed an age and race discrimination suit instead of going through Halliburton's arbitration program. Myers didn't dispute that he had received the notice, but said that he didn't understand its meaning.

Despite a challenge by Halliburton, two lower courts upheld Myers' right to sue. Since Myers' employment is at-will (as with all non-union employees in Texas), the Houston's 14th Court of Appeals found that Halliburton's program constituted an "illusory" promise. Citing a similar case, an appeals court relied on the premise that, since an employer in any at-will work situation "always retains the option of discontinuing employment in lieu of performance," that the employer could not seek to make an employee agree to a program that is, in effect, a "bilateral contract."

But the Supreme Court justices ruled last week that Halliburton's offer "was unequivocal and that Myers' conduct was an acceptance of that offer." In other words, the company could legally compel Myers to participate in binding arbitration. Myers claimed that the program was legally "unconscionable" and could not be applied to at-will employees, but the justices disagreed. "We conclude that the [arbitration] Program meets the requirements for altering an at-will employment contract, is not unconscionable, and is otherwise enforceable under general contract principles," reads the court's ruling.

"The corporate interests that have bought this Supreme Court can wave this opinion around as proof that they have gotten their money's worth," said Texas AFL-CIO President Joe Gunn. Because of employment contracts and other specific grievance procedure negotiations, Gunn said, union workers are likely the only employees in the state that won't be affected by the court's ruling, since they can negotiate the terms of how grievances are handled or the design of a mediation program. Conversely, the ruling will give companies the right to design grievance or arbitration proceedings in any manner they wish. "Here the edict is, 'the design is, my mother-in-law is going to hear the case, and she doesn't want me to go out of business,'" he said. "It is all edict, not procedure."

Cathy DeWitt, a spokeswoman for the Texas Association of Business, said that T.A.B.'s lawyers are still reviewing the decision, but that generally arbitration provisions for employment are a new concept: "I don't think it has been widely implemented -- just from the perspective of talking to business owners," she said. DeWitt added that she wouldn't be surprised if businesses across the state looked to this decision as a model for an arbitration clause that can stand up in court. "The rulings on this stuff have been varied," she said, which is why the blessing of the state's highest court could lead other businesses to pick up programs similar to Halliburton's.