The Save Our Springs Alliance asks for more information regarding FWS's opinion on the Barton Springs Watershed. 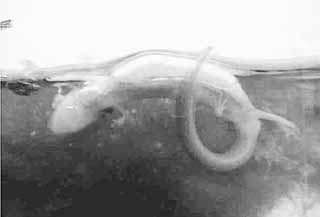 A Barton Springs salamander suffering from bloating disease, a possible consequence of overdevelopment around Barton Creek

The U.S. Fish & Wildlife Service must produce the evidence it used to conclude that construction activity in the Barton Springs watershed poses no danger to the salamander. In a court briefing May 31, U.S. District Judge Sam Sparks gave the agency 30 days to release the documents on which it based its decision to reverse last year's controversial "jeopardy" opinion. The draft opinion called for major changes in the construction permitting process administered by the Environmental Protection Agency. The permits allow for the discharge of storm water associated with ongoing development projects in the watershed.

"Everything in that report is based on science, and the science says the system is broke," David Frederick, the author of the fault finding report, told the Chronicle last summer. Frederick has since been transferred out of Austin to the regional FWS office in Albuquerque, where he no longer wields authority over matters pertaining to the Endangered Species Act. Had Frederick's opinion become final, developers would have had to comply with stricter impervious cover limits and increased setbacks from critical water quality features, among other requirements. Now, the Save Our Springs Alliance intends to examine the final FWS record to determine if the agency's flip-flop grew out of backroom negotiations rather than scientific data. The environmental group makes such an allegation in a May 17 complaint filed as a supplement to its original lawsuit against the FWS and the EPA, which began two years ago this month. Mark Stermitz, an attorney with the U.S. Department of Justice, did not object to the SOS challenge. Stermitz represented FWS via telephone during last week's briefing.

Once FWS has produced the various documents that precipitated its reversal, SOS then has 30 days to respond and perhaps ask for additional information through discovery. Environmental lawyer Amy Johnson, who represented SOS in court with co-counsel Bill Bunch, said she is particularly interested in notes from a meeting that occurred last fall in Washington, D.C., that was attended by a former Austin developer lawyer who now works as an attorney in the Department of Interior. "[R]ather than rely on scientific information, the Department of Interior involved a new politically appointed employee, attorney David P. Smith, in the ... negotiations between FWS and EPA to delay the final [opinion]," the SOS complaint states. In Austin, Smith was an associate with Drenner & Stuart, a law firm that specializes in real estate and land-use matters. Smith went on to work for then-Gov. George W. Bush, whom he advised on prospective appointees to state boards and commissions that oversee natural resources issues. His work in Austin later earned him a DOI job in the Bush Administration.

The FWS reversal on Frederick's jeopardy opinion illustrates a trend in the current political climate, according to SOS. The environmental group claims that Bush officials have "arbitrarily and capriciously" backtracked on at least five other jeopardy opinions drafted by FWS scientists at the local level. In an Arizona case, for example, FWS initially found that the U.S. Army's water conservation program in Fort Huachuca was ineffective and thus jeopardized various species along a unique riparian habitat of the San Pedro River. Washington officials, in turn, removed the jeopardy opinion, replacing it with a no-jeopardy. In April, however, a federal judge ruled against the Bush Administration and ordered the Army to upgrade its water conservation measures and resubmit its plan to FWS. SOS is hoping Judge Sparks will make a similar ruling in the case of the salamander. Until then, we can expect periodic updates on the case throughout the long, hot summer.