Dude, Are You Recycling?

Environmentalist demand that Dell recycle obsolete computers; Dell replies that it is already doing so. 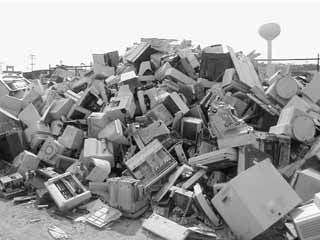 Dude, why won't they take back my old Dell? is the question raised (and the title of a report) by the Computer TakeBack Campaign, a coalition of environmental groups that believe computer manufacturers should take responsibility for pollution created by their outdated machines. As its main target, the campaign has chosen Round Rock-based Dell Computer, the industry leader in personal computers.

"We want Dell Computer to take the same degree of responsibility for used and obsolete personal computers here in the U.S. as the company does in European countries," says Robin Schneider, executive director of Texas Campaign for the Environment, a Computer TakeBack Campaign member. Parts of Europe and Japan have already implemented producer take-back programs, by which manufacturers recycle individual consumers' old machines. In some cases, such programs are mandatory. The Dude report, which came out in March, accused Dell of being an "environmental laggard" in the U.S. market, and charges that through its support of industry associations, the company opposes efforts both here and abroad that require producer responsibility and take-back.

Dell argues that it is an environmentally conscious company that it is already meeting some of the Campaign's demands, and is expanding existing programs to meet or exceed even more. Seemingly in response to the TakeBack campaign, Dell announced on May 17 that it was expanding Dell Exchange -- a program for consumers to donate, auction, or trade in old computers -- to include a recycling option. The program would accept computers from any manufacturer, not just Dell. Company spokesman Bryant Hilton also points out that Dell already has recycling programs for its business and institutional customers. "We've recovered millions of computers through that," Hilton says, adding that such customers compose about 80% of Dell's business, "so that's our first area of attention."

Although many people assume that the high tech industry is a "clean" industry, free from soot-belching smokestacks and rivers of sludge, the reality is quite different. The mountains of toxic waste don't come at the beginning of a computer's life, but at the end. As anyone on the computer-buying treadmill knows, PCs become obsolete almost as soon as they are sold, and their short life-spans are causing outdated models to pile up in mind-boggling volumes. Contained within the computer waste stream are enormous amounts of heavy metals and organic pollutants that are harmless while contained in that plastic box on your desk, but dangerous in a landfill or an unsafe salvaging operation. Activists complain that junked computers end up being salvaged in Asia's poorest countries, with desperately poor workers, including children, handling toxic materials with their bare hands. (For instance, see Exporting Harm: The High-Tech Trashing of Asia at www.ban.org.)

In addition to the TakeBack Campaign, the Calvert Group, an investment firm that screens its holdings for social and environmental responsibility, is pressuring Dell to clean up its act. Calvert plans to introduce a resolution at the July Dell shareholder meeting requiring the company to investigate the feasibility of setting up a more comprehensive take-back program. Both Hilton and a spokesperson from Calvert said the two companies were in negotiations and "on the same page." Calvert has previously tried such resolutions at Dell competitors such as Hewlett-Packard and Compaq (which recently merged into a single company), but only garnered 7%-8% of shareholder support. The TakeBack Campaign supports Calvert's resolution, but as Schneider points out, it calls for only a study, not an actual program. Such self-imposed programs, as tried at other companies, often lack transparency, she asserts -- that is, the public can't verify that it achieves its stated results.

Schneider also criticizes the Dell Exchange expansion on two fronts. First, the program will charge a $15-$25 shipping fee, which she says will discourage participation. "In Europe, Dell takes back old equipment free of charge from all consumers. ... Why do American consumers and the American environment deserve second-class treatment?" Furthermore, she complains, the program will contract with Unicor -- aka Federal Prison Industries Inc., a U.S. government-run company that uses prison labor and sports the motto, "Factories With Fences." Recyclers not using prison labor will face higher costs, Schneider says, and prisoners might be exposed to unsafe working conditions. "It's tougher to get compliance with labor laws [in prisons]," she said.

Dell's Hilton replies that partnering with Unicor, which he says "meets all EPA requirements," helps Dell to establish a program that is "easy to use, and low cost." "I'm certainly not a labor law expert, but I'm confident that there are safe working conditions for Unicor laborers."

The company plans to send a notification to customers informing them their old machines have been recycled. "I don't know exactly how we'll do that yet," Hilton said. But in general, he continued, Dell opposes the government-mandated approach Schneider favors, because the company "thinks we can offer, both with customers and industry, a solution that doesn't necessarily require legislation and regulation."

Dude, why won't they take back my old Dell? is available online at www.grrn.org/e-scrap/Dell_TakeBack_Report.pdf .