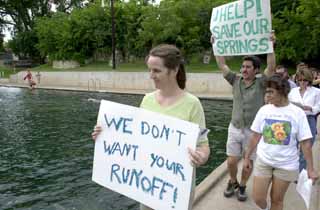 Protesters from the SOS Alliance and Sierra Club try to round up supporters at Barton Springs before heading to Tuesday night's Zoning and Platting Commission meeting. (Photo By John Anderson)

As the proposed City of Austin/Stratus Properties agreement on further southwest development meanders through the planning process, citizens' groups continued a pre-emptive campaign against it. On Monday, the executive committee of the Austin Sierra Club announced its opposition to the agreement, leading up to a demonstration and march organized by the Save Our Springs Alliance from Barton Springs to Tuesday night's meeting of the Zoning and Platting Commission. Opponents hoped to persuade the Z.A.P. commissioners to reject the proposed agreement and zoning measures, as the Environmental Board has already done. (Last week, the Board appointed a subcommittee to further review the agreement in anticipation of continuing city discussion.)

Z.A.P. commissioners gave Stratus opponents at least part of what they wanted -- more time. Midway through the public hearing, commission chair Betty Baker announced that a special task force -- made up of Baker and commissioners Angular Adams, Jean Mather, and Joseph Martinez -- would delve into the issues "in a controlled, fair and manageable environment." Baker also selected a number of stakeholders to participate in the process, including representatives of Stratus, city officials, the Save Our Springs Alliance, the Lady Bird Johnson Wildflower Center, the Circle C Homeowners Association, and several surrounding neighborhoods. Four public meetings will be held: May 28 and June 3, 6, and 17 from 5:30-8pm, at One Texas Center, 505 Barton Springs Rd. The full commission will consider action on Stratus at its regular June 18 meeting.

Tuesday night's hearing lasted well into the evening, with opponents to the agreement outnumbering proponents. Representatives from neighborhoods affected by the zoning told commissioners that a community-based master plan for the area should take priority over continued commercial and residential development. And longtime Barton Springs swimmer Al St. Clair told commissioners that all citizens -- not just immediate neighborhoods -- should be regarded as stakeholders in the Stratus decision-making process.

In a statement issued Monday, Sierra Club Chair Karin Ascot had called the proposal "a bad deal for the taxpayers and the environment."

"Under this bizarre proposal," she continued, "the city will actually pay Stratus $15 million in the form of waived development fees, override certain water quality protections in the SOS ordinance, and allow Stratus one million square feet of commercial development and 1,700 new homes right on top of the [Edwards] aquifer recharge zone. All this in return for a promise from Stratus not to sue for more development, even though Stratus' legal right to develop beyond these limits is far from certain." She described the proposal as "simply throwing in the towel in protecting Barton Springs and the Edwards Aquifer. If this deal goes through we can expect the continued degradation and pollution of the aquifer and Barton Springs." Rather than defend its declared position that Stratus cannot trump city ordinances limiting development, she said, the city has decided to surrender without a fight.

The agreement is not expected to reach the council before late June, but SOS Alliance Executive Director Bill Bunch believes it wouldn't be moving along if some council members weren't supportive. The driving factor behind the proposed settlement, he asserts, is "fear of Austin-bashing legislation" at the Capitol. But SOS and other opponents of the proposal argue that it's not even clear Stratus has the grandfathered rights it's claiming under state law. Federal law protecting endangered species is yet another obstacle to denser development in the watershed.

Ascot, who is also a member of the Environmental Board, concluded, "When the city staff presented the plan to us, it seemed that they hadn't really tried very hard to defend the city's position [in negotiations with Stratus]. ... They need to remember that they work for [the citizens of Austin]."