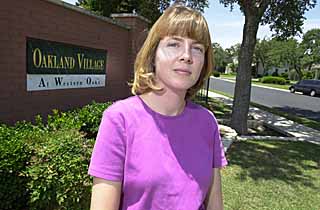 Stratus Properties hit a snag on its way to City Council last week with the grim discovery that thousands of Circle C-area residents were unaware of development plans for a hodgepodge of tracts bordering their neighborhoods.

The Zoning and Platting Commission was supposed to have considered several Stratus zoning requests at its May 14 meeting, but commissioners decided to continue the case to May 21 after a number of homeowners said they had no prior knowledge about development plans for the tracts that checker the landscape along Slaughter Lane and South MoPac. In fact, the only Stratus proposal residents knew about was the Bear Lake PUD -- situated further south on the Travis/Hays county line -- because of the widely publicized opposition by neighborhood groups. Little did they know that Stratus had similar plans for some of its other Circle C holdings. The city and Stratus reached tentative agreement last month on a proposal that calls for less density from the developer and $15 million in waived fees from the city.

Homeowners living within 300 feet of the affected tracts learned of the development plans one week before the Z.A.P. meeting. Stephani Stone, who didn't get a zoning notice because she lives within 500 feet of one of the tracts, was particularly irked because she would have been the logical point person to alert her neighborhood months in advance of the hearing. "You'd think the president of a homeowners association would have been told something about this," says Stone, who heads the New Villages of Western Oaks Homeowners Association, a subdivision of 1,600 homes. (City officials said they assumed that a representative from another Western Oaks group was passing along the information.) Stone says the city is giving in to the interests of a developer only to avoid a lawsuit. "We don't want the city avoiding litigation at the neighborhoods' expense," she says.

By contrast, Circle C HOA leaders knew more about the Stratus deal than they were apparently willing to share with some 7,000 Circle C homeowners. The Circle C leadership -- long rumored to be henchmen for developer Gary Bradley (a charge that is routinely denied) -- had been negotiating with Stratus outside of another stakeholder group consisting of environmental and neighborhood leaders. In a November 2001 e-mail sent to state and local officials, longtime Circle C officer Ken Rigsbee freely acknowledged withholding information from residents in an attempt to "minimize the bomb throwers." The e-mail also named the Save Barton Creek Association and the Save Our Springs Alliance as detractors in the effort to bring new roadways to Southwest Austin. Bradley is spearheading a proposal to extend SH 45 from FM 1626 in the southwest to I-35 and eventually SH 130, and the Stratus development, of course, would help justify the need for the highway. "We resent the posture taken by representatives of those respective groups as having some vestige of a vested interest in the Circle C Ranch," Rigsbee wrote. SOS got a copy of the e-mail through an open records request filed with the Texas Dept. of Transportation. Rigsbee did not respond to telephone or e-mail messages left by the Chronicle.

Stratus CEO Beau Armstrong expressed dismay over the Rigsbee e-mail. "That's disappointing because we were led to believe that by dealing with the Circle C board, we were dealing with the homeowners," he said. "The mistake that people make is thinking that everybody thinks like them."

Despite the historically strained relationship between SOS and Circle C developer Bradley, the environmental group's executive director, Bill Bunch, found himself in good company Sunday evening at Circle C Ranch. About 70 area residents had assembled a last-minute meeting at Slaughter Creek Metropolitan Park to hear what Bunch had to say about the Stratus development, and to figure out how they can quickly organize, inject themselves into a stakeholder process that started six months ago, and seek permission from the city to craft a neighborhood master plan for the environmentally sensitive area.

"This is not an SOS-driven effort," said one Circle C North resident who requested anonymity. "We're coming together because we feel [the Circle C HOA] is clearly not working in our best interest." Of the Circle C residents at Sunday's meeting, some 30 homeowners reside in Circle C North and about 10 live in the larger, more prominent Circle C South. Not all the residents are quick to find fault with the Stratus proposal. John Larkin of the Cherry Creek on Brodie Lane Neighborhood Association says it's not the Stratus project itself that worries him, it's the combination of at least a half-dozen ongoing and proposed developments that's overloading the existing infrastructure. "Each time one development comes in, it makes it that much easier for another development to follow," he says. "You build an office building, and then you need retail to support the offices. After that comes more new homes and apartment buildings."

As for the city, Austin attorney Casey Dobson, who represents the city's interests in the Stratus proposal, says the city shouldn't be blamed for so many residents not knowing about the developer's stakeholder process. "This stakeholder process was not started by the city, it grew out of a discussion between Stratus and some leaders in the environmental and neighborhood communities. Eventually, city representatives were invited to join the process," he said. "From the city's perspective, the response to anyone who says, 'I don't have information,' is to provide information." As such, details of the Stratus agreement are now newly posted on the city Web site, www.ci.austin.tx.us. The city Environmental Board met Wednesday (as the Chronicle went to press) to reconsider the Stratus proposal, after having previously rejected the plan. The city expects to have a final version of the settlement agreement available by June 17, with City Council weighing in June 26-27.