Angry on the Inside? a watershed election, without the watershed

Beverly Griffith speaks to reporters after garnering only 29% of the vote Saturday. Two days later, she conceded the run-off to challenger Betty Dunkerley. (Photo By John Anderson)

On Saturday night, the image that wouldn't leave my mind was from a long-ago football game -- a Monday night affair when Giants linebacker Lawrence Taylor sacked Redskins quarterback Joe Theisman so hard that Theisman's leg broke in three places, ending his career on the spot. "It was an ugly sight," Taylor said.

Is that what happened to the "progressive community" Saturday night? Did those of us who opposed some or all of its de facto slate -- council candidates Kirk Mitchell, Beverly Griffith, and maybe Linda Curtis, and Proposition 1, the Austin Fair Elections Act -- do our jobs too well, as Taylor did? Austin may be better off that voters rejected these people and these ideas at this time. But "rejection" is an understatement for what actually happened.

Not that Austin voters, or even those of us in full or partial opposition to the Tribe, should feel too guilty, any more than Taylor intended to maim, rather than simply tackle, the opposing quarterback. But it was, nonetheless, an ugly sight to see Griffith, an incumbent whom, after careful consideration, the Chronicle endorsed, a woman who can honestly take credit for many good things that have happened over the last decade in Austin, abandoned on Election Day by so many people who used to support her. I respect both Betty Dunkerley and Brewster McCracken, but I don't think even they felt they had that kind of power to sack the incumbent.

They won because Griffith lost, and her unselfish decision to drop out rather than fight on is appropriate. If I thought Griffith was a victim, I would be disappointed in her withdrawal. I'm not. Griffith spent two years preparing to run against Kirk Watson, or at least his ghost, and staked out a claim to territory that no longer exists on the Austin political map. Even though she was the incumbent with the high profile and long record, she was the pig in a poke in the Place 4 race. If her role was to be the anti-Watson, and Watson isn't here, then what does Griffith do for three more years? She made the common political mistake of letting her opponents answer the question for her.

You may dispute that Saturday's results were as fatal to Austin's True Left as this suggests. But there sure as hell isn't any upside, any sign of losing the battle but winning the war. Five years ago, when Ronney Reynolds withdrew rather than face Kirk Watson in a run-off, it was not a tactical retreat but a graceful surrender, and it was clearly understood as the end of a chapter in Austin political life. If Griffith's withdrawal doesn't mean the same thing, someone needs to explain why not.

Kirk Mitchell spent a lot of money and basically made an ass of himself. The Clean Campaigns for Austin team took a worthy idea, a sizable base of public sympathy for campaign reform, and the potential support of the 20,000-plus people who signed up to put it on the ballot, and lost it all by having no good answer for the most obvious question about Prop. 1, its cost. (I feel like I could explain why public financing is worth the money, but somehow they could not. They just said it didn't cost that much.) Did they think it was not a fair question for taxpayers to ask?

My friend Linda Curtis, who helped round up those 20,000 signatures, bristles at being lumped into the "progressive community," and her biggest fans are actually the conservatives and independents who fought annexation, voted strongly for single-member districts, and don't give a damn if she scared early voting out of HEB. There is certainly much common cause to be had among various outsider groups, which for a decade in this town have included suburban white folks as well as Eastside and Southside communities of color and average working stiffs of every stripe. (Central-city Naderites, like all people who go to meetings and hearings when others are working or raising kids or sleeping, have comparatively ample access to power in Austin, regardless of what they say, which is why they get called hypocrites.)

But seeing a lot of dry grass is not the same as starting a prairie fire, and for whatever reason, Curtis has not been able to strike the match, perhaps because her allies on the left aren't really giving her any help. And so they pull 15 or 20 or 25%, regardless of the campaign, regardless of the context. Brewster McCracken, Mr. Establishment, got more non-voters to the polls on Saturday than did any populist or progressive. It is the entrenched leaders of the council -- the Slushers, the Goodmans, and even the Watsons -- who managed to hook up with people who don't vote and don't like City Hall and don't really know why. The people who are angry on the inside.

Who's Watering the Grass?

And who are they angry at? Well, perhaps they're angry at Griffith, at Mitchell, at the members of the Tribe who got us where we are today and now pretend they didn't. Perhaps they agree with Mitchell that the CSC deal was a horrible idea -- and they hold Mitchell, and Bill Bunch, and other Save our Springs Alliance leaders responsible. (It wouldn't have happened without them, after all.) For all her distancing from the Watson agenda, they seem to view Griffith not as the one good council member, but as the worst of the lot. Perhaps they think that her record of dissent was meaningless, because it didn't change anything; it became easier to ignore the sound of the squeaky wheel than to get the grease.

And perhaps, more than anything, they're angry for the same reason that I get annoyed at being told to support this or oppose that "because we're the Chronicle." They're weary of being told what it means, politically, to be an Austinite. They want to make up their own minds about fiscal responsibility and good government and Kirk Watson's legacy and, yes, Barton Springs. They like the fact that Daryl Slusher is less dogmatic than he was at the Chronicle, that Betty Dunkerley comes to office without any obvious ideology, that McCracken (who will be back, rest assured) is both a progressive Democrat and a suburbanite, Army Reserve officer and deacon in his church.

So the progressives and populists of the Tribe ended the night talking only to themselves, while the genuine grassroots had their own party and their own watershed moment, without the watershed. It was an ugly sight. But the game will go on. 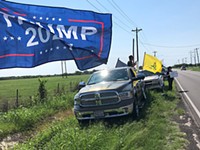