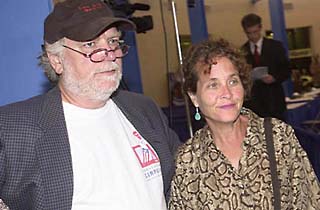 While less than 9% of Austinites bothered to vote this weekend, 80% of registered voters in France turned out for Sunday's run-off between right-wing xenophobe Jean-Marie Le Pen and conservative President Jacques Chirac. Chirac defeated Le Pen, but many French are still crying in their wine over his victory. "He is a crook, but better him than a fascist," one unenthusiastic Chirac voter told The New York Times.

Just when you start to think Stratus Properties' proposed development is a done deal, it's not. Such was the case Tuesday night when all signs indicated that the Zoning and Platting Commission would take action on the requested zoning change instead of granting a postponement sought by neighborhood and environmental representatives. But between Circle C homeowners raising new concerns about the deal (they had apparently been kept in the dark by homeowner association leaders) and the lack of information available for Z.A.P. consideration -- not to mention an agenda stacked with zoning cases -- the commissioners decided their sanity would be better preserved by a postponement. A hearing is scheduled for May 21, with action scheduled for June 18. The city Environmental Board found itself in a similar situation last week, with only sketchy information provided for consideration. And what few details board members did have they didn't like, so they rejected the plan in a 5-0-3-1 vote, with three members abstaining and another leaving the meeting before the vote. Although it's uncertain whether the Environmental Board will have another opportunity to consider the plan, members nevertheless laid out certain provisions they want included in the proposal, including adequate enforceability of environmental rules, offsite road runoff treatment, and a specific plan to protect the aquifer. -- Amy Smith

On Tuesday, May 14, representatives of PricewaterhouseCoopers, AngelouEconomics, and many other successful firms that no longer use space bars will join other city business and community leaders at a kick-off event (a happy hour) for the Austin Clean Energy (A.C.E.) Initiative. These bigwigs hope to turn Central Texas into "an international hub for the clean energy industry." 4:30-7pm, Serrano's Symphony Square, 1111 Red River. For more info, call 241-1655.

Bigwigs Address Future Bigwigs: Ex-Leader of the Free World and Pappy of the Conqueror of Evildoers, George H.W. Bush, will give the graduation address at the LBJ School of Public Affairs at 1pm on May 18 in the LBJ Auditorium of the Sid Richardson Hall/LBJ Library complex. We assume someone will organize a protest. And on May 17, CBS newsman Dan Rather will speak to graduates of the College of Communication at the Frank C. Erwin Center at 2:30pm. -- Lee Nichols

A national study by the National Center for Public Policy and Higher Education found that the price of a college degree from a Texas public institution has shot up 63% since 1990 -- the fourth-largest increase in the country. While Texas universities are still a relative bargain (about $600 cheaper per year than the national average), the state's two-year colleges are among the nation's least expensive. Meanwhile, Gov. Rick Perry announced a $20 million program to expand funding for "first generation" college students -- that is, if the Lege approves -- and State Comptroller Carole Keeton Rylander pitched her plan to make two-year colleges free to Texas high school grads. -- M.C.M.

State Insurance Commissioner Jose Montemayor told legislators that at least 6,000 Texas doctors -- about 15% of the total -- will lose their malpractice insurance this year as carriers try to cut their losses. Thirteen insurers have abandoned the Texas market since 1999, leaving only four. This is mostly because of the booming malpractice-suit industry in the Valley, where claims are increasing at a rate of 60% a year. Doctors have predictably called for liability limits, and Gov. Rick Perry proposes capping damages at $250,000. Plaintiff's lawyers say the 1995 tort reforms passed by the Lege seem not to have worked. -- M.C.M. You've got another chance to catch Bike Like U Mean It, the new documentary on Austin bicycle culture, at tonight's (Thursday, May 9) Bikes Across Borders Benefit, 8pm at the 300 Allen St. Warehouse. Also for your enjoyment: music from This Bike Is a Pipe Bomb, a puppet show of the new Bikes Across Borders comic, Mark Reed's Puppetistas film, a presentation of the Beehive Collective's anti-war and Plan Colombia posters, and circus acts. Don't forget snacks for the pet chickens. If straight-laced politics is more your thing, Robin Rather, Mary Arnold, Will Wynn, and other local luminaries are holding a fundraiser for Sen. David Bernsen, who's running for Texas Land Commissioner. Broken Spoke, 6-9pm, also tonight, May 9. Chaparral and David Murray will provide entertainment.