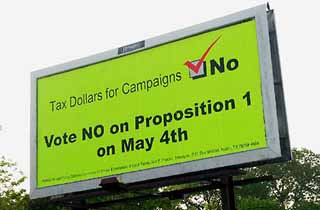 Bright yellow billboards against Prop. 1 popped up all over Austin last week.

The fight over Proposition 1 is finally heating up. If passed, Prop. 1, aka the Austin Fair Elections Act, would institute a system of public financing for city council candidates. It's quickly proving to be the most controversial item on the ballot, even more than Prop. 3's single-member districts(!), and groups are lining up left and right, so to speak, to either praise or denounce it.

Fred Lewis, the most prominent backer of Proposition 1 on Saturday's ballot, knows the name of his real enemy. Despite the rise in the past couple of weeks of anti-Prop. 1 groups with bland, anonymous names, the lawyer and lead spokesman for Clean Campaigns for Austin says, "I think the biggest effect on the polls is the hundreds of thousands of dollars of free newspaper space provided for RECA [Real Estate Council of Austin] and the Chamber [Greater Austin Chamber of Commerce] by the Austin American-Statesman," referring to the daily's vociferous campaign against the measure.

Nonetheless, Prop. 1 has other opponents (e.g., this paper's editor despises it). And last week several bright yellow billboards popped up around the city, with a simple message: "Tax Dollars for Campaigns: No." The billboards are signed by the Citizens Committee for Proper Expenditure of Local Taxes, listing Ann E. Proctor as treasurer. At press time, calls to the Ann E. Proctor in the phone directory had received no answer.

Citizens for Responsible Use of Tax Dollars is less mysterious: Its driving forces are the Chamber of Commerce and the Real Estate Council of Austin, but they've lined up a bevy of influential citizens on their side. CRUTD held a press conference last week to denounce Prop. 1, accompanied by allies including Marta Cotera (former member of the Charter Revision Commission), Ginny Agnew (former chair of the city's Ethics Review Commission), and Austin's firefighter and police unions. And in the previous week at City Council, Will Wynn led the "anti" contingent.

Mark Hazelwood, president and CEO of the Chamber of Commerce, says of Prop. 1, "The more we got to understand it, we didn't agree with it. And then several other people said, 'Hey, we've looked at this and we have concerns.'" Hazelwood describes CRUTD as less an organized group than "a very loose confederation. [It] ranges from small business owners to different types of organizations, people involved in various aspects of this proposition and charter reform." Hazelwood says CRUTD may try a direct mailing, but as of last week didn't have plans to buy TV or other advertising.

Cotera initially signed the petition to get Prop. 1 on the ballot, and says "it seemed like a good idea," based on the petition language. "But then reading [the actual ordinance] while I was on the commission, it was very, very difficult to work it out. ... It was too difficult to understand. And Fred Lewis couldn't ever explain it to our satisfaction." Cotera said the sections that expand the powers of the Ethics Commission to police the public financing, including subpoena power, were "vague." Ultimately, Cotera said her commission decided to recommend the proposition be put on the ballot because, "We felt we owed it to the thousands of people who signed the petition."

One concern consistently raised by all opponents: the financial hit to a city budget currently being scraped to the bone, at a time when city staff are trying to differentiate between "core" and "non-core" services. Lewis claims that, based on the experience of other cities, Prop. 1 should cost about $660,000 per election for the first few years. City staff estimates are higher -- $1.6 million to $2 million. The ordinance limits the funding to no more than 0.25% of the city budget, so the theoretical upper limit would be about $4.5 million.

Scott Toupin, president of the Austin Association of Professional Firefighters, said the question is not what's wrong with Prop. 1, but "the impact to the budget in this particular budget year. The city is facing a shortfall of funds. ... If Prop. 1 were to pass, the General Fund would be immediately impacted."

RECA President Kirk Rudy says, "Basic needs like fire, crime, health, and safety are more important than spending money on candidates." Needs like those are likely to be defined as non-cuttable "core services," but Rudy believes that ultimately everything is vulnerable. "As the situation changes, if it continues to deteriorate, something will have to be considered for cuts." Rudy supports Austin's current public financing, which gives money to candidates who qualify for a run-off. Toupin also doesn't believe Prop. 1 was thoroughly vetted by public comment in its crafting. "The public didn't have the proper information, they didn't realize what they were voting for."

One interesting perspective came from the Travis County Democratic Women, which has long supported public financing but voted not to endorse Prop. 1. TCDW President Anne C. McAfee says she supported Prop. 1, but like the members who voted it down, has "mixed feelings" about it. "Their feelings were less mixed than mine," McAfee said. "They were pretty sure this was not a good time for it. I think that they would like to see Fred Lewis come back with more figures and more information and maybe just a little bit more support and substance and backup."

Yet well before the opposition got organized, Prop. 1 was racking up a long list of supporters. The Sierra Club, the League of Women Voters, and Austin Area Interreligious Ministries are among several progressive organizations that favor it. "We feel it's a moral and ethical issue that people are able to run for office who may not have as much money as the candidates that we now see," says AAIM Executive Director Susan Wills. "So many people could provide courageous leadership if they had the money to run."

The uncertain specter of "fringe" candidates like cross-dressing Leslie Cochran and perennial entrant Jennifer Gale dipping into the public till has been potent ammo for opponents, especially the Statesman, but as Austin League of Women Voters President Maxine Barkan noted, Gale opposes Prop. 1 because the qualifying requirements -- a signature and $5 contribution from 500 registered voters -- are too high.

The Sierra Club's Dick Kallerman acknowledges that Austin currently has (arguably) a "green council," but says that if money in politics is "not a problem today, it may be in the future. We've had the problem in the past ... in two, four, or six years, we might have people buying elections. It's an ounce of prevention."

Lewis says he believes he has adequately answered the objections many times already, in speeches, in editorials, and at www.cleancampaigns.org. He says city staff "needs to do their homework"; that Marta Cotera "should have read the proposition and she would have known" how the Ethics Commission will function; and that Prop. 1 was vetted by a number of citizens groups: "Common Cause, the League of Women Voters, lawyers, environmentalists, political consultants, everyone we could think of that might want input.

"I think that by the time the system is implemented, the recession should be over and won't play a role in the city's finances," Lewis says, adding that immediate budget concerns are "a typical thing said by people who don't favor public financing." His conclusion is blunt. "If not now, when?"

Definitely not now, says Hazelwood. "We're talking about cutting [the budget] at the margins. I don't think the need has been demonstrated that justifies diverting the money."