In budget crunch, how will Austin decide which 'pet projects' get spayed?

Do we feel sorry for Toby Futrell yet? Well, no, not really, since the new city manager clearly doesn't feel sorry for herself. But the upcoming budget cycle -- which has already started, months ahead of usual -- will be noisy and odorous enough to disturb anyone's honeymoon with the City Council.

It's almost useless to detail how bad Austin's fiscal situation is, because it just keeps getting worse and worser. At the beginning of this fiscal year (FY2002), city staff could still surmise that, with the cuts already made during FY2001, we would face modest, not-gonna-kill-us, we-can-handle-it deficits in FY2003 and beyond. The FY2002 budget was officially adopted on the morning of September 11, and its assumptions were rendered obsolete within minutes.

Now, after toting up the homeland security bill and watching Austin's sales tax revenue drop, and drop, and drop, and drop (the terrorists are winning!), staffers, council members, and council candidates are tossing around deficit estimates that are double what, nine months ago, was the worst-case scenario for FY2003. Congratulations, Toby! Here's your full plate and your empty pocketbook. Knock 'em dead! What do you want to kill first?

Let's Go to the Tape

While citizens and council members often get passionate about one or another piece of the city's nearly $2 billion budget (usually a small piece, like the 0.04% -- four-hundredths of one percent -- that goes to the Austin Music Network), they don't get very interactive in the budget process itself. Watching the budget cycle is like watching a football game; we expect certain performances from city staff based on what we know about the players.

For all the talk around City Hall about how many touchdowns Toby Futrell has scored in her years as Jesus Garza's playmaker, her strength is offense -- the operations-and-policy side of city government. Betty Dunkerley, now a council candidate, captained the fiscal side (defense) of Garza's team, which in retrospect was also Garza's stronger side. Now that Garza, and Dunkerley, and longtime budget director Charles Curry, have all headed into free agency, Futrell has a less familiar squad playing fiscal defense, and thus she'll be seen as calling more plays herself, and the council is already kibitzing more than usual from the sidelines.

Futrell and Finance Director John Stephens have already shown they can pull off the two-minute drill, pulling cash out of the ether (well, out of next year's property taxes) to fund shortfalls in the FY2002 budget. Now she needs to lay out a game plan for a win in FY2003. (Or else the Terrorists -- an expansion franchise? -- will have won!)

Last week, Futrell introduced the council to what's been called the "core-service study," actually part of what, under Garza, has become an elaborately rationalized budgeting process. (As one can see by the ever-increasing bulk of the budget documents during his tenure; they're filled with business plans, goals, objectives, benchmarks, and performance measures that seek to capture every single city function.)

So Futrell aims to classify each and every city line-item as a "core" or "semi-core" service (better, we suppose, than "hard-core" and "soft-core"), or else as a "service enhancement," which this year is a useful synonym for "dead." However, as Futrell pointed out, this "classification is not the only criteria to determine funding." One of the slides in her presentation to the council reads thusly: The "criteria are not infallible and the result of classifying activities and services ... may not be exact. There will be exceptions, there will be ambiguities, and there will be occasions for reasonable people to disagree."

Whose Ox Gets Gored?

Boy howdy! -- and not all reasonable people will be treated to Blue Bell ice cream and Tylenol, as the council was during Futrell's presentation. To summarize, core services, if missing, would jeopardize near-term public safety or health, or leave the city at risk of catastrophe down the road; or put the city out of compliance with state or federal mandates; or deprive the citizens of everyday benefits they can't get anywhere else; or cost the city revenue. Semi-cores are the same but not as much so -- their absence would jeopardize long-term safety and health, leave Austin in minimum compliance with state or federal mandates, deprive citizens of important benefits they could get somewhere else, and so on.

Some of the core services cited by Futrell include public safety first-response (the "corest" of them all), building inspections, rodent control, library circulation, the parks aquatic programs, and warrant collections; semi-cores included disease and injury prevention, water conservation, workforce development, and park tennis programs. Which already foreshadows the highlight reel of this year's budget game; neither "core" nor "semi-core" is an exact synonym for "pet project," that fiscal beast that supposedly overpopulates City Hall, devouring the available supply of common sense.

For years on end, the budget cycle has worked like this: Garza allocates 100% (or more) of the available funds, then Dunkerley spins a few million last-minute bucks out of straw, then the council takes a couple of days, or weeks if lucky, to get rid of this small change. If the projects thus funded are "pet projects," then workforce development is a big sloppy Great Dane, having received several million bucks for several years running from the equity-minded council, without much in the way of how-to-spend-it detail. Yet Futrell called it out by name as a semi-core service, because so many other people do it -- ACC, AISD, the state, numerous nonprofits, and the private sector.

Will Futrell's honeymoon be sweet enough to survive the howls and stink when that beast, or another, gets spayed? Dunno. (At least workforce development matters enough to justify an argument, unlike other famous "pet projects" of past and present.) Kinda depends on the election. As you probably already know, the most important question in this election is not "What did you do to save Barton Springs?" It's "What will you do when you have to cut someone's favorite program?" The council could defer to Futrell's judgment and the core-service schema, or it could make the hard choices every candidate claims to be ready to make.

Or it could dither and try to keep everyone happy, which this council is really good at. But that's not what you'd call a game-winning strategy. 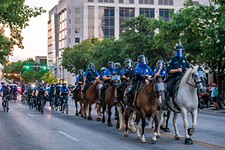