Developers, editors, and environmentalists battle over the future of Wimberley. 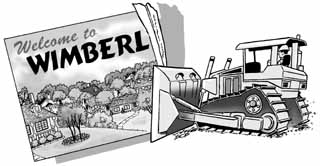 In tiny towns like Wimberley, political controversies seem to take on the unfortunate qualities of family feuds. One side accuses the other of duping them, barbs fly back and forth, and, in tragic cases, the mix of anger and sadness propels the squabble straight to the courthouse. Such is the emotional level of contention in Wimberley these days. In this instance, voters will determine their own fate in the May 4 election, when they decide whether to abolish the local government. The city bureaucracy -- although the word hardly seems apt for a town of 2,100 -- grew out of scratch only two years ago when voters, in an equally contentious election, decided to incorporate.

Both sides are convinced they're in the right. Proponents of incorporation argue that, without strict rules and regs in place, the town will fall into the hands of Houston developers and an investor-owned utility company trying to foil Wimberley's plans to build its own wastewater treatment plant. "A lot of people are working very hard to destroy our government," Mayor Linda Hewlett said earlier this week. She added that she knows of at least one Houston developer whose pending offer on a 65-acre tract hinges on the outcome of the election.

The Wimberley Valley is one of the richest ecological spots on the Hill Country map: Its most delicate treasure, Jacob's Well, holds a unique path directly to the aquifer below. But groundwater problems, compounded by sewage issues, are creating a strain on local resources that could only worsen with unbridled growth, Hewlett and other government advocates maintain.

On the other hand, "Take Back Wimberley" proponents contend that the City Council went too far too fast in enacting several dozen ordinances in just 14 months. "They want to zone every square inch of the city," groaned Paul Xiques, a Wimberley real estate broker and outspoken critic of local regulators. "We're just a country town with cosmopolitan overtones. But they have a vision of Wimberley that they would like to impose on the rest of us." (For the record, Xiques says he favors a city government -- just not this one.)

Like all great political battles, this one, too, has big-name notoriety. There's a rumor that John O'Quinn, the controversial Houston attorney with a success record of taking on big corporations, has a hand in the matter. (O'Quinn was the lead attorney in the state's lawsuit against the tobacco industry, scoring a still-disputed $17.3 billion settlement.) This theory is fueled by nothing more than his ties to some choice Wimberley property, as well as area developer, E.F. "Rocky-- Romano, who contributed $1,500 to the Take Back Wimberley campaign -- more than half of its total $2,887 reported in financial documents released April 3. O'Quinn did not return a phone call from the Chronicle.

But Romano says there's "absolutely no truth" to rumors that O'Quinn is backing the abolition campaign. "He's never given them a nickel or attended a meeting. John doesn't even like developers. He bought his property just to enjoy...he's not going to develop it." Romano says his work for O'Quinn includes making improvements to his ranch -- clearing cedar, building two new homes and stocking it with African game. Romano also owns an exotic animal ranch.

O'Quinn is not exactly a favorite son in these parts, since he bought the 5,500-acre Fulton Ranch and closed off the beloved Little Arkansas Road to the public. O'Quinn's representatives swung a backroom deal with Hays County -- a $5.8 million donation to build a "realignment" of the road -- and the county commissioners approved the plan without a public hearing, much less a courtesy call to Wimberley officials. Before anyone knew it, Little Arkansas Road was history. "That was the most beautiful country road you've ever seen," longtime resident Bill Johnson said wistfully. "It was a favorite of residents and visitors alike."

Hays County Judge Jim Powers gave it an altogether different spin: "The road was pretty much deteriorated," he told the Austin Business Journal last April. "It was an honorable thing for O'Quinn to do." The business weekly also quoted O'Quinn's promise not to develop the land, although local skeptics believe he'll change his mind if voters decide to do away with city government.

Perhaps a bigger threat to incorporation advocates centers on AquaSource Inc., which had tried unsuccessfully to build a second wastewater treatment facility in the city's extraterritorial jurisdiction. AquaSource stated on its permit application that the plant would serve a proposed residential development on property owned by Romano, but Romano adamantly denies any development plans on his property. He said he initially told AquaSource he would support the sewage plant, but reneged after learning about the company's plan to discharge 900,000 gallons (later trimmed to 600,000) of wastewater into Wilson Creek, which flows into the Blanco River. At any rate, Wimberely officials and residents raised such a stink over the proposal that the company withdrew its request with the Texas Natural Resource and Conservation Commission. Since the Blanco River flows through O'Quinn's property, some folks presume O'Quinn got word to Romano to back away from the deal because he didn't want effluent to muck up the river.

Hewlett, the mayor who has opted out of running for re-election, fears that the city's efforts to establish a municipal-owned sewage plant -- in partnership with the Guadalupe-Blanco River Authority -- will be for naught if voters decide to take Wimberley back to pre-incorporation times.

Meanwhile, letters to the editor continue piling up at the Wimberley View newspaper office. Charles "Mac-- McClure, a longtime journalist who took the editor's job a little over a year ago, says he had no idea that sleepy Wimberley was capable of such volatility, but that his main concern now is whether the community will be able to mend itself after the election. "The worst part about this has been the acrimony -- it's been rancor to the extreme. But we're all going to have to live with each other when this is over."