The Gridlock at TxDOT and 51st Street 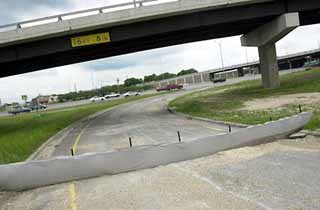 Mark Boyden, president of the Windsor Park Neighborhood Association, describes dealing with the Texas Dept. of Transportation as eerily reminiscent of the predicament of the Earthlings in the opening chapters of Douglas Adams' comic science-fiction epic, The Hitchhiker's Guide to the Galaxy. An alien empire called the Vogons is about to demolish Earth to make way for a "hyperspatial express bypass." When the stunned residents of the planet object, the Vogons respond that the bypass plans have been available for 50 years in the planning department on Alpha Centauri, "only four light years away ... so you've had plenty of time to lodge any formal complaint and it's far too late to start making a fuss about it now."

For Boyden and Windsor Park, the "bypass" at issue is -- or was -- the 51st Street overpass at I-35, or more precisely, the cloverleaf entrance ramp from southbound Cameron Road to southbound I-35 that once curled over the 51st Street overpass. TxDOT closed the ramp last October -- on the same day it opened the giant U.S. 290 flyover (a mile north of 51st) that now allows northeast suburban commuters to move directly from 290 to southbound I-35. TxDOT planners decided that the new 290 entrance ramp, with its lengthy descent, would enter the highway too close to the cloverleaf entrance at 51st Street and result in "bottlenecking" at rush hour. So they closed the 51st Street ramp -- moving the bottleneck, in effect, to the overpass. "If we had left ... those ramps in close proximity it would have created a slowdown on the highway, and the possibility of more accidents," said TxDOT spokesman John Hurt.

Unfortunately for the residents of Windsor Park, the Cameron Road cloverleaf had been the most direct -- and safest -- entry onto the southbound freeway from their neighborhood, and its closing has resulted in a dangerous situation on the 51st Street overpass. Southbound Cameron Road drivers hoping to enter the freeway at 51st must merge left immediately through two lanes of westbound traffic and then cut into the left-turn lane and onto the southbound frontage road, or else attempt an illegal left turn from the middle lane and merge at higher speeds on the frontage road itself.

According to Gordon Derr of Austin's Transportation, Planning and Sustainability Department, a traffic count at the overpass indicated that during the morning rush hour, approximately 1,000 cars are turning onto the southbound frontage road from westbound 51st each hour, while some 750 cars an hour are entering 51st from the southbound Cameron Road ramp (some do not attempt to merge left, but proceed west on 51st). That traffic meets heavy and often high-speed traffic moving directly westbound on 51st.

According to Austin Police Dept. statistics, Boyden says, accidents on the bridge have increased "five- or six-fold" since October, compared with the same period last year. Some are fender-benders, he said, but others are quite serious. Last week, for example, a serious wreck occurred when a westbound car on 51st entered the intersection but had to stop short at the bridge -- already clogged with cars -- and was rear-ended by another car attempting to enter the intersection behind it. Moreover, the overpass is a designated bicycle lane, and in theory one of the few safe places pedestrians can attempt to cross I-35. But two pedestrians have been killed while trying to cross the bridge in the last few months.

As Boyden and WPNA see it, by closing the cloverleaf TxDOT has addressed the I-35 highway traffic-flow problem by moving that problem into the neighborhood. "You shouldn't just displace a traffic problem," said Boyden, "or create one that's even worse."

Hurt responds that neighborhood drivers should use one of several "alternative" means to enter the freeway -- for example, either driving north on Cameron or other neighborhood streets to enter the southbound freeway via the 290 flyover, or driving east through the neighborhood to Manor Road and around old Mueller Airport to Airport Boulevard. "Safety must always trump convenience," said Hurt, adding, "the WPNA is not the group going to be sued if there are accidents on I-35." Asked about the increase in accidents on the overpass (also in the freeway right-of-way, and therefore within TxDOT's planning authority), Hurt replied, "We believe those accidents are due to driver error." He adds that the current jams on 51st are a consequence of neighborhood drivers refusing to "alter their habits," and says the people in the neighborhood will simply have to get accustomed to the change. "We haven't heard from the businesses or other neighborhoods in the area, so it appears only the Windsor Park neighborhood is having a problem with it."

Boyden insists that it is not just convenience but safety that the neighborhood is trying to restore. "The city has known for years that this particular intersection is an issue," he said. "What TxDOT has done has exacerbated the problem." And in his judgment, TxDOT's stonewalling response to neighborhood input has contributed to the problem as well.

TxDOT (sounding curiously like the Vogons) asserts that the WPNA missed the 30-day comment period and public meeting -- in March of 1998 -- to provide neighborhood input on the proposed changes, so it is far too late to protest now. Boyden says that the agency failed to notify the officers of the WPNA at that time, and when the association discovered the plans a month later, it began immediately asking for input -- only to be rejected ever since. But Hurt says that the agency has followed federal guidelines (which require only 10 days for comment) on public outreach, and that once a project is under way, "public input is useless. ... And complaining about a project that's been done wastes everybody's time."

Most recently, only a month after a January 2002 meeting among TxDOT, the WPNA, and city engineers to discuss a range of possible solutions, TxDOT crews began bulldozing the cloverleaf, which is now half-destroyed -- under a standing planning schedule, according to TxDOT. Boyden calls the destruction an act of "bad faith," saying he believes the only reason the work was done was to prevent the cloverleaf from becoming even an interim solution to the current gridlock. "We're not trying to make life miserable for the WPNA," replied Hurt, "but they have made it clear that the only solution they want is reopening the cloverleaf -- and that ramp is not going to be reopened."

The agency and the city are discussing putting a stoplight at the top of the Cameron Road ramp, to alternate with westbound traffic on 51st. A longer-term solution is to build a full intersection between 51st and southbound Cameron, eliminating the merging ramp and also allowing Cameron Road traffic to turn east onto 51st (currently that traffic must travel through the neighborhood at 52nd Street). Boyden says the WPNA supports both these proposals, but doesn't believe the agency will do anything "unless we continue to push." Hurt says the agency is studying the feasibility of both projects, and hopes to have the study completed by the end of May. "If either is feasible," he said, "the work could begin whenever funding becomes available from the Transportation Commission -- perhaps as early as this year, if we can submit it as a safety project."

"I'd like to think that they would consider our input, and recognize that this would be a problem," said Boyden. "We just want a solution. We should not be held hostage to poor planning, and that is our message. That's what it comes down to. And if they'd only done what they should have done three years ago, they could have fixed the problem then."

Said Hurt: "Our priority is always going to go to the interstate. Our clientele is not just Austin residents -- it's local, national, and with NAFTA it's international. We're not going to do anything that's going to impede traffic on the interstate."