Even after being dropped, Linda Curtis' lawsuits could impact city politics. 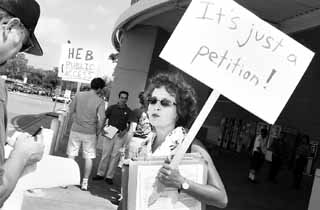 Linda Curtis' lawsuits are history, but they could still heavily impact city politics.

On April 4, the campaign reform activist and City Council Place 3 candidate took her first suit of the season -- against election opponent Jackie Goodman -- directly to the Texas Supreme Court. Curtis had hoped to get Goodman thrown off the ballot for not collecting enough signatures to bust Austin's term limits law, but within hours, the court -- without providing a reason -- dismissed her application for writ of mandamus. Curtis quickly announced that she would pursue no further legal action, but criticized the city for closely scrutinizing referendum petitions while only using statistical sampling (flawed, she asserts) to determine whether Goodman had collected enough signatures. "I don't want to go through with [the lawsuit]," Curtis said. "I really want to run against Jackie. Just taking somebody off the ballot is anti-democratic." But she still hopes to establish whether council member petitions will get the same close scrutiny as citizen referendum petitions (like those for which she has worked). "There is a double standard that certain people get downtown that I am sick of."

To analyze the city's computations for her suit, Curtis hired UT statistics professor Tom Sager. While the city determined it was 93% likely that Goodman had collected enough valid signatures, Sager says the probability is closer to 46%. Yet Curtis doesn't plan to challenge the city's numbers. "Politically speaking, I think [46%] is close enough," she said. Nevertheless, if Goodman wins and is later found to be short on signatures, she could be forced to vacate her seat.

Meanwhile, Curtis' suit against HEB for allowing early voting while outlawing petitioning on its premises prompted the grocery chain to pull out of Travis County's early voting program. HEB had determined that petitioning is solicitation, and now claims that it dropped out of the voting program in order to avoid future litigation. Curtis dropped her suit last month, saying both that the suit had become moot (the Austin Fair Elections Act petition that she was working on was obviously going to succeed) and that she wanted to spend no further money on it. HEB's pullout will "gut" the early voting program, says Travis County Clerk Dana DeBeauvoir. In an April 9 letter to the Austin American-Statesman in which she called HEB a "hero," DeBeauvoir wrote: "They're not legally required to help, but they volunteer for early voting because it's good for the community and they care about democracy. Linda Curtis sues HEB trying to force her private signature-solicitation business into the stores. ... Then, she blames HEB for curtailing early voting under these circumstances." (Curtis was paid to collect signatures for Council Member Beverly Griffith's third-term bid.)

DeBeauvoir showed up ("just to listen," she said) at an April 4 kick-off press conference for Independent Texans, a new political organization that Curtis helped found for reform-minded independent voters. For a location, Curtis chose the front of HEB's Hancock Center. Joined by representatives of the Travis County Libertarian and Green parties, she called on the company to reinstate early voting, and on shoppers to boycott HEB during the early voting period.

Arriving at the same time as DeBeauvoir -- but apparently not with her -- was Goodman campaign finance manager Alfred Stanley, who distracted the television cameras with a sign that read, "HEB a Hero, Linda 'Sue' Curtis a Zero." "I'm here to say that HEB does more for this community in a minute than Linda will do in her entire life," Stanley announced. "It's because of her lawsuit that we're not able to vote here any more, and if she'd just stop suing people and start working for the good of this community, we'd all be better off." Stanley claimed he attended on his own initiative -- "without discussing this with anybody beforehand."

Curtis disputed Stanley's criticisms. "HEB access is so important," she said. "We're not picking on HEB, we're giving them credit for being our local grocery and want them to reopen early voting." Curtis said she had petitioned at HEBs during campaigns she'd worked on in the past. "We had very open access, and it worked out well."

A major concern of the HEB pullout, DeBeauvoir says, is that no adequate replacements can be found for the stores at East Seventh, Congress & Oltorf, and Ed Bluestein & Springdale -- all locations with heavy minority populations. Nelson Linder, president of the Austin NAACP, said his organization is asking HEB to review its pullout and awaits a response. "I think [Curtis'] lawsuit was absolutely ridiculous," he said. "These kinds of politicians are a disservice to the community they claim to serve. We're telling people not to vote for them."

Meanwhile, Mayor Gus Garcia, who lives near the Springdale location, said HEB's withdrawal "does a great deal of damage" to get-out-the-vote efforts -- but he doesn't blame the company. "They had to do something to counter Curtis. But what Ms. Curtis has done greatly damages people's ability to have a good place to vote."

Curtis says she's worried about possibly short-circuiting minorities' access to the vote, but that HEB took "a hard-line" position and wouldn't negotiate in or out of court. "That's why we're asking the community to take action," she said. "The county commissioner is not at least advocating for a compromise between the two poles. Perhaps the community can enter in and say, 'Can't you work something out?'"