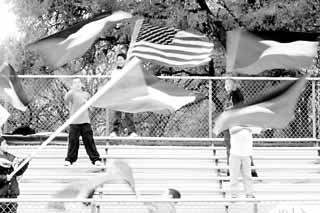 The Bush/Blair anti-terrorism tag team met at Dubya's Crawford ranch this weekend and drew a large contingent of protesters, including these kids waving American and Palestinian flags. The majority of the participants were members of the Arab-American community of Dallas and the surrounding areas. (Photo By John Anderson)

Election Haiku:
Victor, Everyman.
So was plumber down the street.
Run-off victor: Kirk.

On March 26, the Georgetown City Council voted 6-0 to enter into an agreement with Steger & Bizzell, the original engineers of the now-infamous Dove Springs Wastewater Treatment Plant, to hire yet another outside engineer to review the plant's original design. Two previous reviews found that, in places, the Dove Springs plant was apparently not engineered with enough structural steel. Steger & Bizzell have protested that conclusion, which they say is based on outmoded data. Georgetown Council Member Doug Smith proposed the motion, and now the city will seek yet another engineer -- to be approved by Steger & Bizzell -- at a cost not to exceed $10,000, in hopes of ending the ongoing controversy surrounding the plant.

This is only a test, and we flunked: Broadcasters told legislators last week that Texas' high tech Emergency Alert System doesn't work because the Dept. of Public Safety won't use it. The EAS, which replaced the old Emergency Broadcast System, allows DPS to relay warnings via satellite simultaneously to all of Texas' 1,000-plus radio and TV broadcasters, each of which paid thousands of dollars to install EAS equipment. But to keep its costs down, DPS instead prefers a "daisy chain" relay system that broadcasters say routinely misses Brownsville and Laredo and occasionally skips other markets. The Lege, which hopes to tackle Texas' increased homeland security needs, wants answers from DPS.

You've seen Adopt-a-Highway signs out in the country, and now local yokels can Adopt-a-Street. The city, along with Keep Austin Beautiful and corporate sponsor Tokyo Electron, will kick off the program tomorrow (Friday) and announce the first streets to be adopted. As with the highway program, adopters will, through financial and volunteer support, help pay for keeping the streets clean.

Feminists and nuns duking it out over ideology and matters of public policy is a sorry sight, but that's exactly what happened during the city's recent effort to revamp its lease agreement with the Catholic Seton Healthcare Network and maintain comprehensive reproductive services at Brackenridge Hospital. And it left many social service advocates crying, "health care taxing district now!" That sentiment appears to be gaining momentum. Several council members are kicking around the idea, and on Saturday, April 6, the Travis County Democrats unanimously adopted a resolution supporting a taxing district. Meanwhile, a group of county residents has begun petitioning for a hospital district election to be held in November. Austin would be the last major city in Texas to adopt a health care district, which must be approved by the state Legislature.

On April Fools' Day, the Hyde Park Baptist Church filed a new site plan with the Watershed Protection and Development Review Dept. for a northern extension to its existing parking garage on Speedway. Actually, the plan wasn't very new: The church's original garage site plan called for the same extension, which the City Council rejected last spring. (HPBC later appealed the council's decision in federal court; the case is pending before the U.S. district judge.) For opponents of the church's proposed five-story parking garage, the good news is that the Hyde Park Neighborhood Plan NCCD caps the height at 30 feet and requires a Conditional Use Permit for parking on the site. The Hyde Park Planning Team will review the new site plan today (Thursday) at 7:30pm at the Methodist Church, 4001 Speedway; bring your personal copy of the land development code and join in the fun. Any comments from the Planning Team about the proposed site plan must get to city staff by April 22.

On Saturday, April 13, don't forget to wish your vehicle a "happy Central Texas Air Care Day." Then head over to the northeast corner of the Highland Park Mall parking lot (behind Foley's), where from 10am-5pm a station set up by the Air & Waste Management Association will provide free emissions tests, car care tips, alternative fuel vehicle displays, and air quality educational materials.

The city encourages citizens interested in urban forestry to participate in TreesCount, a study and inventory of trees in the downtown central business district that takes place the next two Saturdays, April 13 and 20. Information on species, circumference, height, and health will help the city to plan future tree-planting, reduce overall energy costs, and improve Austin's air quality. Surveying begins at 9am, and participants get free T-shirts and lunch. RSVP at 974-3230.

Author Francis Moore Lappé and her daughter, Anna, recently visited the First Unitarian Universalist Church of Austin to discuss Hope's Edge: The Next Diet for a Small Planet, a collaborative effort and sequel to the elder Lappé's groundbreaking Diet for a Small Planet. The Lappés journeyed to nine countries on five different continents to write the book, which focuses on globalization, sustainability, GMO foods, and social movements and organizations they believed were emblematic of people's attempts to evolve their own markets, farming methods, and fair trade systems. It also includes 100 pages of recipes from restaurants across the country that use whole and organic foods. "By no means do we feel we are wagging our fingers and telling people to do anything," said Anna Lappé. "It's not about 'you should,' but helping people see the possibilities and make choices."

Despite the concerns of a group of parents calling themselves Parents Against the Radiation Tower, board members of the Lake Travis ISD agreed April 8 to let the city of Austin install a microwave radio tower near the high school and middle school. P.A.R.T. opposed the tower, which will serve the city/county EMS system, based on their concerns that no one has sufficiently studied the long-term health effects of such towers.

"To Heman Sweatt, We Owe a Debt." That's one way to describe the subject of the 16th annual Heman Sweatt Symposium on Civil Rights at UT, which begins Thursday, April 19 with a keynote speech by famed attorney Johnny Cochran on the symposium's theme of "Reparations: Does America Owe African Americans a Debt?" Cochran is part of a national legal team, headed by Harvard University's Charles Ogletree, preparing to file a court action demanding reparations for unpaid wages for the forced labor of slaves and punitive damages for exploitation and oppression during slavery. The symposium is an annual event in honor of the memory of Heman Sweatt, who in 1946 was denied admission to the UT School of Law because of his race and became the plaintiff in the landmark Sweatt vs. Painter lawsuit. Cochran will speak at 7pm at the LBJ School auditorium, kicking off a week of activities that include an art exhibit and performances. For more info, see www.utexas.edu/events/hemansweatt/ index.html.

Today (Thursday) marks the second in a two-day conference sponsored by the James A. Baker III Institute for Public Policy at Rice University aimed at exploring the future of the U.S. War on Drugs. On April 10, DEA Administrator Asa Hutchinson debated with Common Sense for Drug Policy Executive Director Kevin Zeese -- the first time the DEA head has ever publicly faced off with the head of a drug policy reform group since his appointment, CSDP reports. During today's proceedings, Travis County District Attorney Ronnie Earle will take the stage to address the role of the legal system and the future of drug policy. The conference is being webcast on the Baker Institute site at www.bakerinstitute.org.

In this month's edition of the Canadian Medical Association Journal, researchers report that long-term pot smoking does not make people dumber. While the scientists found there was a small decline in IQ among current "heavy users" (those who smoke at least five joints per week), researchers note that overall the IQ of the heavy pot smokers in their study still remained higher than average for their age groups. "We conclude that marijuana does not have a long term negative impact on global intelligence," the researchers wrote. The study is available online at www.cma.ca/cmaj/vol-166/issue-7/0887.asp .