Models, smart & stupid: Mueller process ought to be used elsewhere 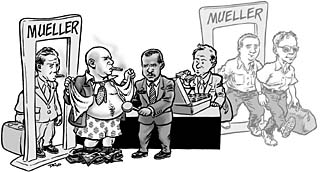 In the annals of Stupid Citizen Tricks, you'd have to go way back to top last week's moves by the local Mueller Redevelopment Team joint venture. The MRT, already the underdog in a head-to-head with San Francisco's Catellus Development to land the contract to oversee the Mueller project, fired off letters to the City Council, staff, and the Austin American-Statesman arguing that -- in its expert opinion -- the mixed-use Smart Growth urban village planned for the old airport couldn't, or shouldn't, be built. "It's not just that the emperor has no clothes," said MRT leader and Avery Ranch developer Dick Rathgeber to the daily. "In fact, he's buck naked."

This was an attempt to forestall the inevitable, which should come today (Thursday) with the City Council set to vote on whether to enter into exclusive negotiations with Catellus. Tactically speaking, the MRT had little to lose. From the beginning it's been assumed, at least tacitly, that if local developers could and would do big New Urbanist developments like the New Mueller, we'd have them already. And we wouldn't need a Smart Growth incentive system to make them happen, and we wouldn't have gone nationwide to find a Mueller master developer. (We would, probably, have swapped Mueller rights with Stratus Properties and been confident that it would all turn out okay.)

Right now, all over the campaign trail, it would be a sin against God to pour cold water, as the MRT has, on the Mueller plan -- and, by extension, on the multiyear citizen-driven process that created it. Rather, incumbents and challengers alike are pointing to Mueller as a model for how we should deal with the inherent conflicts born of Austin's need to manage its growth and reinvest in its urban core. Get the citizens and neighborhoods involved early, start with clear goals you want to achieve, take the time necessary to address community concerns, and set up structures to oversee the project to make sure the goals aren't forgotten down the line.

Since the Mueller planning process began in earnest in late 1995, the developer community has been conspicuous mostly by its absence; early on, the project became a joint venture between the city planning staff and the neighborhoods around the airport, because nobody else showed up. Nobody thinks the actual Mueller plan, as drafted by Roma Design Group, also of San Francisco, is going to be built exactly as is; even by the time Catellus (if they're chosen) and the city come up with a contract to sign, it'll be a year or two from now and the plan will be different.

But with so many years, hours, and dollars invested in the project, the MRT's claims only reinforce perceptions -- rightly or wrongly -- that these local guys are a) amateurs, b) unconcerned with what neighborhoods and progressives think, and c) confident that they've got some kind of stroke at City Hall that will swing things their way. In the old days, the last of these was probably true; even if council members weren't swayed by developers and their lobbyists and their campaign cash, city staff could reliably be counted on to do what real estate thought best. This time around, even the city staffers were in no mood to hear the MRT whine, and said so (in the daily) in no uncertain terms.

Once More Into the Breach

But if Mueller is a model (and we've made that claim over the years about as vigorously as anybody), then why isn't it being followed elsewhere on council's agenda? To cite everyone's favorite recent example of poor planning, what happened with the Villas on Guadalupe? You can't dispute that local residents feel little ownership of the Villas, or believe it corresponds to their goals for the area. That's because we don't have a neighborhood plan, the locals say: The city's taking so long to pull off neighborhood planning, with too few staffers and too many strings attached.

That may be, but as Council Member Daryl Slusher points out elsewhere in this issue, "then we'd just be fighting over the neighborhood plan," as did the not-so-far-away Hyde Parkers, for months on end. The Mueller model doesn't really speak to whether Parcel X should be zoned dense (multifamily) MF-4 or ultra-dense MF-6, because ultimately it is different -- crucially so -- from what's been done so far under the guise of neighborhood planning.

Because Mueller is so vast, there was really no way to embark on the project without establishing goals -- for transportation, affordability, economic development, and such -- that were relevant far beyond the confines of any surrounding neighborhood. And it's just this kind of broad-brush goal-setting that Villas supporters used, ad hoc, to justify the council's 4-3 vote in favor of the project. We need to get more students near UT, they said, to minimize the load on the roads and the endless sprawl of student ghettos on East Riverside and Far West Boulevard.

A worthy goal, we suppose. But where, exactly, is the city's plan that shows how we should bring the students back to campus? It ain't being produced by neighborhood planning. This reporter's own neighborhood, of which I chaired the planning team, is almost as close to UT as the Villas, and has plenty of student renters. Yet we were allowed by staff and council -- rightly, in my opinion, but nonetheless allowed -- to down-zone nearly all of our multifamily property, making the Villas darn near impossible in Central East Austin. It's hard to blame the neighbors on the other side of UT for feeling used and abandoned.

If the city really wants to follow the Mueller model, it needs to convene all the UT neighborhoods, outside the purview of neighborhood planning, to talk about how to re-integrate students and their housing into the campus area, to establish goals for doing so, and then to use neighborhood planning (or whatever other means it feels appropriate) to answer Villas-like questions of implementation. And the UT student problem is but one of a truckload of issues -- the very same issues tackled by the Mueller project -- that neighborhoods can't solve each on their own but would be happy to help solve, as long as solutions aren't crafted by developers and foisted upon them. As the MRT has learned, there's nothing Smart about that. n