Notes of an Old Leftist

Lone Star liberal Dave Richards releases his memoir at the Scholz Garten to much fanfare. 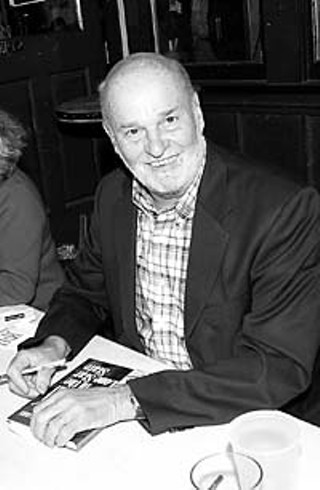 When people talk about the old Austin -- and they always are -- and a nostalgic mist glazes over their eyes, they are referencing a time and place embodied by labor and civil rights lawyer David Richards. He was Austin's most visible and active attorney for the left, and considered musicians and writers among his best friends. The creative ferment, the freewheeling disregard for the status quo, the unabashed pride of place: These are qualities of life Richards and his ex-wife, former Governor Ann Richards, helped spearhead.

Last Wednesday, Richards, who is 68, signed copies of his recently published memoir, Once Upon a Time in Texas: A Liberal in the Lone Star State (UT Press, $39.95), at Scholz Garten. In often plainspoken prose, Richards describes what it was like to force the state to dismantle its segregated school system and to repeal the loyalty oath that required citizens to swear that they did not belong to "subversive" organizations, among many other battles he fought on behalf of disenfranchised minorities and workers. The state's old crusading Democratic contingency is "terribly truncated" now, Richards writes; he wanted to record "the players and the movements that sought to make the state more tolerant and more tolerable" before his "energy is lost."

But Once Upon a Time in Texas is more than a legalistic account of Richards' skirmishes with the establishment. The author, who writes that "representing unions in Texas in those times was one step removed from being a Bolshevik revolutionary," is just as concerned with describing the spirit of old Austin as he is the state's political culture. In chapter nine, after about 70 pages that describe how a well-heeled boy from Waco became a lawyer for the Teamsters Union who eventually argued before the Supreme Court, Richards reveals what it was like to move to a "somewhat frayed" house in West Lake in the early Seventies, a decidedly less tony place than it is now:

Our introduction to West Lake came shortly after our arrival. We had agreed to host an antiwar fundraiser at the house, probably for the Vietnam Veterans against the War. In all events, it was widely attended. The music was provided by a group that called themselves the Viet Gong, or some such moniker. As was often the case at such gatherings, the music was loud and cacophonous, echoing through the peaceful hills. At some point in the evening, the town marshal, who was our neighbor, arrived in response to a number of totally justified noise complaints. I remember thinking that I had placated him by toning the music down and promising to shortly end the band's efforts. The marshal's report to the town council was more alarming. He claimed that he had been surrounded by a bunch of stoned hippies who kept screaming "Off the pig."

At Scholz's, where, as Richards writes, "malcontents traditionally found their solace in Austin," the author didn't exactly know what to expect last week. The rabble-rousing Seventies vanished long ago, and he assumed, good-naturedly, that his friends were "too much deadbeats" to show up at an event for a memoir published by a university press. "I thought they'd come down and drink a couple of beers and play grab-ass," Richards, never one for the obfuscating phrase, acknowledged in an interview with the Chronicle a few days after his book signing, which benefited The Texas Observer. A noteworthy 235 copies were sold, though, requiring him to sign straight through from 5-7:30pm without stopping or visiting with his friends -- who did show up, and even purchased copies. The bustling crowd of old politicos filled up the back patio of Scholz's, kibitzing like crazy at a long-overdue party as if the gathering were "Custer's last stand," as one local writer observed.

Richards "expresses himself with great conviction" in his memoir, said retired federal judge William Wayne Justice, who attended the signing. Thorough praise, considering that Justice, Richards attests in his memoir, "contributed mightily to the civilizing of the state in difficult times," and is regarded as the last of the surviving federal judiciary in Texas that revolutionized the state's culture by throwing out reactionary laws.

"I really did feel that there were people I had known in various civil rights and labor work that I thought were important and brave and likely to get lost in the pages of history," Richards said after the book signing. "And if I could get something published that had their names in it and said something decent about them, that would be sufficient justification."