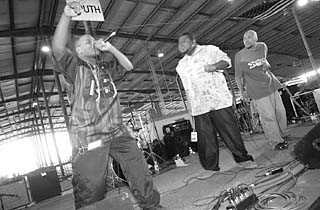 Promised an all-day county fair of music, fun, and platitude-free progressive politics (as well as free ice cream bars, organic cheese sandwiches, and chocolate milk), an estimated 7,000 people gathered at the Travis County Expo Center March 23 for the kickoff of Jim Hightower's Rolling Thunder Down-Home Democracy Tour. The purpose, Hightower said, is "to start a coalition process, simply by giving people a reason to be together," and to inspire the citizenry to wrest power from corporate "greedheads" and conservatives. "Let's put the party back in politics," he said.

As a former Texas agricultural commissioner, Hightower knows county fairs. And as a self-described "populist road warrior," he also acknowledges the difficulties progressives face in maintaining viable coalitions. "Keeping our side together," he said, "is like trying to load frogs in a wheelbarrow." Hightower envisions Rolling Thunder as a contemporary version of Chautauqua, a traveling movement that began in southwest New York state in 1874. Chautauqua brought families together for conversation, entertainment, and community, and during several decades evolved into a 21-company effort that attracted 35 million people annually. Although the original Chautauqua park in New York and two others continue to serve their original purpose, its memory is long forgotten among most Americans. To help Hightower revive the movement's spirit, over 40 national organizations have signed on as national "planning partners," and their ranks are growing.

Among the locals who turned out was state Rep. Elliott Naishtat, D-Austin, who called Rolling Thunder inspiring. "This type of event is so important," he said. "It reinforces my belief that if we reach out in the right way, [and] if we can touch the hearts and souls of people the way they're being touched today, that we can get people meaningfully involved in the political process. ... It's a question of message and connecting. It's happening here." Also in the crowd were state Sen. Gonzalo Barrientos, D-Austin, and U.S. Senate hopeful Victor Morales.

Some campaigns represented at Rolling Thunder have already experienced success -- including the campaign finance movement. On March 27, President George W. Bush signed into a law a bill banning soft money (the National Rifle Association quickly filed suit, charging unconstitutionality). Ninety-two-year-old Granny D -- who two years ago walked across the country on behalf of campaign finance reform -- spoke enthusiastically but realistically about her cause, saying the bill "does have holes in it, but it's a start." As for Austin's local clean elections campaign, Granny D remarked, "Everywhere in the country where I go, people say, 'Austin is going to get public funding,' and everybody's very happy that it's happening. If it passes, other cities will follow suit." (Prop. 1 on the May 4 ballot proposes a charter amendment that would, among other campaign reforms, create a system of public campaign finance.)

For six months, Sept. 11 derailed people's attention from domestic issues. Now that the dust has settled over Ground Zero, said Jesse Jackson Jr., "folks like Hightower and Granny D are beginning to sharpen the pencil and refocus on everyday issues that matter." Throughout his speech, Jackson validated Hightower's mission by repeatedly referring to "this Chautauqua movement." Progressives must begin to "fight for fundamental rights like the right wing does," he said, "and move the vast majority of people towards accepting a human rights initiative" that advocates housing, education, and health care instead of corporate subsidies, gun rights, and pro-life initiatives.

The day's biggest draw was Michael Moore, who flew into Austin for just a few hours to address Hightower's crowd and sign copies of his new bestseller, Stupid White Men ... and Other Sorry Excuses for the State of the Nation! Citing Enron and the pink Capitol building that spawned ex-governor George W. Bush, Moore wryly but admiringly told his audience, "You're on the front lines here of all that is evil," before launching into accounts of the dark side of politics and the publishing world. Last fall, Stupid White Men publishers HarperCollins told Moore that due to the sensitized (sanitized?) climate created by Sept. 11, he would have to rewrite half of his book, "tone down the dissent," and pay $50,000 to cover costs incurred for those copies already printed. "They wanted me to pay them to censor myself," he said, adding that HarperCollins intended to "pulp," or recycle, the discarded copies. HarperCollins eventually retreated, but Moore says he wouldn't work with them again. "They've stopped fighting me," he said, "but they're not supportive. They don't like what I'm saying, but they're making millions off it."

Hightower is not making millions off Rolling Thunder -- but that's not his goal. During an evening-capping performance by Texas-born singer-songwriter Michelle Shocked, he stood behind the stage, talking with a couple of the tour's 300 volunteers, his famous moustache accenting a broad smile. "I'm thrilled," he said, adding that progressive change has always stemmed from small but dedicated groups.

"No movement has ever come from the top down," Hightower said. "There's too much progressive energy focused in D.C. -- but our power is out here. We have to fight locally, without being drowned out by money."

From Austin, Rolling Thunder will travel to Tucson, Atlanta, and Chicago, with more to follow. The Organic Valley Family of Farms "magic bus," a brightly decorated kitchen-on-wheels, will follow the tour and continue distributing those free cheese sandwiches.