The Politics of Hatred: FreePAC's Gay-Bashing Reveals the Dark Side of Texas Politics 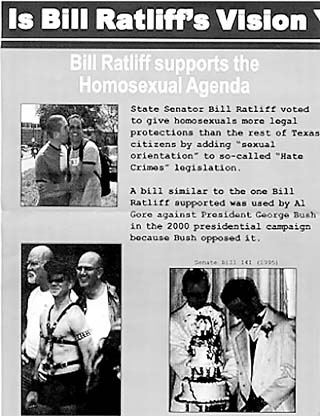 It's fitting that The Laramie Project should be playing Austin at the same moment that Texas state politics is undergoing one of its periodic spasms of sexual hysteria. The Project (at the Zach Scott through April 7) dramatizes the story of the 1998 Matthew Shepard murder in Laramie, Wyoming. Shepard, you may recall, was a 21-year-old college student tortured and beaten to death because he was gay. It is instructive to keep his story in mind -- and the fact that more than 20% of the hate crimes reported in Texas are against gay men and women -- when considering last week's ferocious argument among state Republicans over the campaign leading up to Tuesday's primary.

Last week acting Lt. Gov. Bill Ratliff (running for re-election to his East Texas state Senate seat) called a Capitol press conference to denounce the Dallas-based Free Enterprise Political Action Committee, better known as "FreePAC," which had sent out scurrilous campaign mailers against Ratliff and six other GOP incumbents (among them Sen. Jeff Wentworth, whose district includes much of South Austin). The mailings, intended to rally support for the incumbents' extreme-right primary opponents, feature photos of men kissing, cutting a wedding cake, etc. -- the sort of thing that apparently haunts hard-right nightmares -- and the charge that Ratliff and his colleagues promoted "the radical homosexual agenda" by voting for the James Byrd Jr. Hate Crimes bill, which finally passed last year. (Wentworth, by the way, voted against it, but perhaps because he advocated fairness in redistricting he gets tarred with the same vicious brush.)

The Byrd bill, signed into law by Gov. Perry, protects minority citizens against hate-motivated crime, and has nothing to do with either kissing or marriage. But the supporters of FreePAC apparently object to any interference in the God-given right of Texans to harass, intimidate, brutalize, and murder gay people with impunity. (Less than a generation ago, similar mailers would have featured interracial couples and denounced "miscegenation." I suppose we can call this progress.)

They Call This Freedom

That might sound a little over the top, until one recalls that for the Nazis as for the Taliban, homosexuality is a crime punishable by death, and that the crabbed version of "Judeo-Christian" values grimly promoted by the FreePACers carries the same Old Testament sanction. But it's also important to note that the wealthy supporters of FreePAC are not simply a handful of fringe extremists. Rather, they include some of Texas' most consistent corporate donors to "conservative" causes: San Antonio medical-bed tycoon James Leininger, Wal-Mart heir John Walton, Interstate Batteries executives Tommy Miller and Norm Miller. Chicken magnate and Ratliff foe Bo Pilgrim is on the list, as is Albert Huddleston of Hyperion Resources, and nuke-waste enthusiast Harold Simmons. There's also FreePAC's top underwriter, James Lightner, who made a fortune in the defense industry and donates it to such noble causes as the racist campaigns of former KKK Grand Wizard David Duke. (For a breakdown of FreePAC's major contributor list by Texans for Public Justice, see www.tpj.org/Lobby_Watch/lw.html.)

If their past record is any indication, the moneyed goons of FreePAC may not achieve much in terms of electoral results. According to John Coppedge, writing in the Capitol newsletter Quorum Report, "In the 2000 cycle, FreePAC played in several races with little impact. With the amount of money they spent and the poor return on investment, in some businesses they would be charged with incompetence at least, or more likely, malpractice." Coppedge says the PAC spent $271,000 in eight legislative races, lost six, and truly influenced only one.

That record is not likely to strike fear into the hearts of seasoned politicians like Bill Ratliff and Jeff Wentworth -- but it's worth recalling that, by many accounts, it was Leininger's late money that pushed Rick Perry past John Sharp in the 1998 lieutenant governor's race. One suspects that history had some effect on Perry's lukewarm response to Ratliff's call for a stronger denunciation of FreePAC's mailings.

The Culture of Hatred

But whatever the effect of FreePAC's hate-mongering on a few state politicians (and this column went to press before the primary results were known), the real victims are gay Texans, men and women, once again used as inflammatory scapegoats in a contemptible political agenda. FreePAC's mailings both feed and depend upon a culture of hatred -- a presumption that gays and lesbians have no rights or dignity that straight people need to respect. That culture results in deplorable crimes such as happened to Matthew Shepard -- but more often in daily indignities and injustices, and the denial of rights and protections that most citizens can take for granted.

We should applaud Lt. Gov. Ratliff and his colleagues' stand against FreePAC's hate mail. But it would be easier to do so, had not Ratliff only a few months ago stamped his approval on a piece of official gay witch-hunting every bit as scurrilous and contemptible as the brochures reproduced on this page. As reported in this space on Sept. 14, in August three longtime Senate employees -- Katherine Staat, Barbara Schlief, and Shelley Smith -- had their careers destroyed and their lives and reputations devastated, supposedly for mismanagement, but in fact on the basis of slanderous and patently unbelievable charges of lesbian sexual harassment, following an unprofessional, one-week investigation which accorded them not a whit of due process. They were fired, in short, for being gay.

Thus far the women's requests for mediation have been rejected, and they now have complaints pending before the Texas Human Rights Commission, on the basis of gender discrimination. They could not complain that they were discriminated against as lesbians -- that is yet another "special right" not accorded to citizens deemed by the Texas Legislature unworthy of such protection.

I will believe in the sincerity of the lieutenant governor's abhorrence of hate-mongering, and that of his fellow senators, when they do something to redress this terrible injustice against their longtime staff members. That would be the most honorable response to the culture of hatred represented by the likes of FreePAC. n