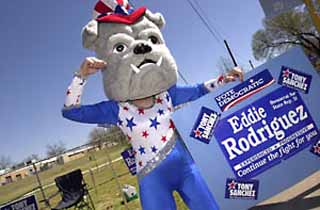 Activist Lori C-Renteria tries to drum up last-minute support for her candidate, Eddie "Bulldog" Rodriguez, in the Texas House District 51 race on Tuesday. In the mostly uncontested primaries, the six-way fight for Dist. 51 was a rare competitive race. For full election coverage, see p.28. (Photo By John Anderson)

Between setting the ballot for the city charter election (see p.18) and voting third reading on the Villas zoning (see p.23), City Council set themselves up for a contentious agenda next week, March 20-21. There's no meeting this Thursday, the 13th.

Austin Energy is currently removing fuel oil from two tanks at the Holly Power Plant -- a step toward the plant's eventual retirement. Once Holly closes, the agency says, the back area of the plant will be remediated into parkland overlooking Town Lake.

The Barton Springs Edwards Aquifer Conservation District interviewed candidates for its open general manager position this week, and plans to make a decision on March 21.

Not even a week passed before a dedicated customer of the Texas Chili Parlor bought the place and saved it from doom. New owner Scott Zublin -- who has surely earned the gratitude of Chili lovers citywide -- will pay off the Parlor's debts and reopen the restaurant. Earlier last week, the state closed the restaurant for failure to pay over $36,000 in both sales and mixed-beverage taxes.

The City Council approved $498,000 in fancy new cameras that will collect traffic data and hopefully improve the city's flow problems. The 120 cameras and computer system could take four to seven months to install.

Former mayor Lee Cooke's business savvy has elevated him to the chief executive level at Austin-based Tanisys Technology Inc., where he also serves as chairman of the board. Cooke was mayor of Austin from 1988-91, preceding Bruce Todd. He is also owner of Habitek International Inc., an Austin-based holding company.

In an effort to stem the tide of runaway growth in northern Hays County, officials from the boom cities of Buda and Kyle are each implementing 120-day building moratoriums. Both cities want to develop growth-management plans during the ban. Meanwhile, residents in northwest Hays County fear the moratoriums may increase development in their neighborhoods, where Dripping Springs city officials have thus far shown no desire to slow rapid growth.

The Lower Colorado River Authority will hold a meeting in Dripping Springs on Tuesday, March 19, to discuss an environmental impact study of the agency's water line to that city. Consultants from Bio-West Inc., the Utah firm that conducted the study, will attend the meeting, scheduled for 6:30pm at the Terrace Club, 2600 U.S. 290 East.

To save Travis County residents the trouble of going to the "cattle call" for jury duty selection, the county has established I-Jury, a new Web-based system. See the county's Web site, www.co.travis.tx.us.

Cecile Richards, the daughter of former Gov. Ann Richards and founder of the Texas Freedom Network (which tracks the activities of the Religious Right), has taken a job in the office of U.S. House Minority Whip Nancy Pelosi of California. At press time, the Chronicle hadn't learned what exactly she'll be doing for Pelosi, but we expect it won't require much interaction with Pat Robertson and Jerry Falwell.

MuniNet, an online newsletter aimed at helping municipalities do a better job of communicating on the Web, has honored the city of Austin's official city government site (www.ci.austin.tx.us) as one of the nation's best. "The easy-to-navigate site provides a variety of handy maps (downtown, metro, bike, airport, and more!), budget and annual financial reports, and an impressive section devoted to Smart Growth," MuniNet said, among other words of praise. As a frequent user of the site, "Naked City" agrees.

The Travis County Libertarian Party will hold its county convention on Saturday, March 16, from 9am-noon at the Commissioner's Courtroom, 314 W. 11th. Candidates whose districts are entirely within Travis County will stand for nomination, and new county leadership will be elected. The district convention, when candidates for State Board of Education and other district offices that partially lie outside of Travis County will stand for nomination, will take place Saturday, March 23, from 9am-noon, also at the Commissioner's Courtroom. The state party convention is June 7-9 in Dallas. For more info: www.austinliberty.org.

On March 5, the Texas Civil Rights Project filed suit on behalf of Manor resident Georgia James and the Manor-based nonprofit Economic Justice Foundation, alleging that several city buildings are in violation of both state and federal disability laws, including the Americans with Disabilities Act (ADA). TCRP's suit lists nine separate deficiencies and obstacles found at Manor's City Hall, Municipal Court, and police station that make them inaccessible for people with physical disabilities.

On Saturday, March 16, the American Friends Service Committee will host Woman and War -- a Conference for Women, a women-only conference at Stonehaven Ranch in San Marcos. Activities include "The Politics of Taking Hijab" -- a panel of Muslim women who have chosen to wear the traditional veil -- and a screening of the documentary Regret to Inform, about filmmaker Barbara Sonneborn's pilgrimage to the Vietnamese countryside where her husband died during the Vietnam War. The conference begins at 8:45am and will run for most of the day. Participants are welcome to stay the night, and will be asked to pay a small registration donation. To register, call Patrice Mallard at 474-2399.

Longtime Texas GOP political consultant John Weaver, who ran U.S. Sen. John McCain's campaign in the 2000 primary season, has switched to the Democratic Party, reports The Wall Street Journal. This is not Weaver's virgin run with the donkeys: The Journal notes that he was a Dem before the Reagan era.

"I miss my sons, but there was nothing to eat." That's the New York Times' "quote of the day" for March 8, from an Afghan man who had traded his children for food.

In case no one has reminded you today, Austin's population increased by 41% between 1990 and 2000. That means "dynamic change." But how is our city evolving? On Tuesday, March 19, the Austin Society for Intercultural Education, Training and Research will address that question at "The Changing Face of Austin," SIETAR's next meeting. Speakers include Asst. City Manager Roger Chan and attorney Rafael Quintanella. This gig is free, but BYOR -- bring your own refreshments -- or wait until the end and join others at a nearby restaurant for networking and grub. 5:30-7:30pm, Texas Student Union, Board of Directors' Room (fourth floor, Room 4.118). RSVP before noon Monday, March 18, at murphy@mail.utexas.edu.

On election day, KEYE posted on its Web site (www.keyetv.com) a promise to "run the latest results, in an unobtrusive manner, on the screen during prime time programming" (our italics). Well, thank goodness -- we wouldn't want democracy to interfere with our enjoyment of JAG.