A rogue's gallery in the Gregory Steen murder case 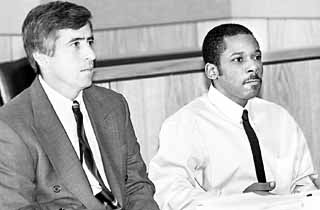 Testimony continued this week in the capital murder trial of Gregory Steen, charged with the 1997 murder of homeless drifter Jim Dunham. Assistant DA Todd Ward said 35-year-old Steen shot and killed Dunham on a deserted road in eastern Travis County after Steen, along with his ex-girlfriend Kelly McGary and another person, tried to buy a half-kilo of cocaine from Dunham. Ward said when Steen discovered the drugs were of poor quality, Dunham ended up dead.

The case is turning out to be not as simple as the prosecution would like -- but it has featured a local rogue's gallery more colorful than most run-of-the-mill Travis County trials, making it more difficult than usual to sort out the guilty from ... the less guilty. And as defense attorney Robert Icenhauer-Ramirez would have it, an apparently incomplete investigation by Travis County Sheriff's Office detectives, coupled with the state's reliance on a less-than-credible star witness, has left Steen -- already notorious for being shot in the back by an Austin police officer while fleeing a crack house in October of 1997 -- to take the rap.

Indeed, witnesses called this week have exposed more than a few inconsistencies in the state's case. In an apparent attempt to pre-empt the defense theory that someone else had a better motive to kill Dunham, prosecutors called 34-year-old Markus Green. Green testified that, just four days before Dunham was found dead, he took out a $250,000 life insurance policy (with a $500,000 double indemnity clause) on Dunham. The policy was part of a "scam," he said: Green would seek out homeless people, drug addicts and/or people who might be infected with HIV -- people living a "high-risk" lifestyle, as Green put it -- and offer to pay life insurance premiums for them, if they would name Green as a beneficiary.

Prosecutors say Green, however mercenary, would not have wanted Dunham dead until he was sure the insurance policy would be accepted, which Green testified would take at least 30 days. But other details of Green's painfully brief relationship with Dunham were also inconsistent with the facts of the case -- already high on the list of bizarre Austin crime stories.

Dunham was found dead on the morning of Sept. 12, 1997, in a Ford Escort registered to Green. Green (currently awaiting trial on three unrelated counts of practicing medicine without a license and sexual assault, after allegedly opening up a "clinic" where he conducted gynecological exams on female patients) was picked up by police that afternoon and interviewed regarding his relationship with Dunham. He gave a fairly detailed account of what transpired on Sept. 11, 1997, the last time he'd seen Dunham, yet somehow failed to mention that he had taken out the life insurance policy. Sheriff's Sgt. Stan Roper agreed this was suspicious, but added that a few days later, Green returned to say he had forgotten to mention the life insurance policy -- while refusing to give another sworn statement.

Green himself testified that he saw Dunham in his room at a Northeast Austin motel at about 10pm, and Dunham asked Green to go buy him some beer. Although a mini-mart was nearby, Green said he drove to a gas station at Seventh and I-35, bought beer, and drove down Sixth Street to see what was going on, taking about 30 minutes -- which would've put him back at the hotel around 10:30pm.

But according to Kelly McGary, Steen's ex-girlfriend and the state's only witness connecting Steen to the crime, Dunham was killed some time around 10:30pm -- which would make Green's account impossible.

Unless, of course, McGary is wrong -- and there is considerable reason to believe she has a less than unbreakable relationship with the truth.

McGary, a convicted forger, got an immunity deal from the DA's office in exchange for her testimony. As she tells it, after she and Steen discovered the cocaine they bought wasn't very pure, she rode with Steen in her car, following Dunham and another man to Platt Lane, where Steen and the other man walked up to Dunham's open window. She said she heard gunfire and that Steen and the other man returned to her car, where Steen handed her a pistol. (McGary once positively identified the other man as Timothy Chandler, but later recanted, saying she could not be "100% sure" -- so the state dropped murder charges against Chandler two weeks ago.)

But the trial testimony is just McGary's most recent version. Since 1997, she has given roughly four different renditions of what happened that night, accounts she admitted Tuesday were rife with lies. "I was on a lot of drugs at this point," McGary said. However, she insists that since she was given immunity in March 2000 she has told the truth about the murder. In court, Icenhauer-Ramirez pointed out that her various stories -- including her alleged truthful testimony -- don't seem to add up. At one point, McGary told investigators that she had been riding in the victim's Ford Escort, behind the driver. McGary testified Tuesday that she was mistaken, and that she had never been in the Escort, "because I don't like to ride in other people's cars."

After the murder, McGary said, although she said she was frightened of Steen and afraid for "what might happen" to her, she didn't part company with him until she made sure he gave her some cash -- money she said she assumed he got from Dunham. She waited another four days before fleeing to Houston, where she pawned one of two pistols she said Steen gave her, before going to New Orleans -- where she was arrested for another forgery.

"So, you're telling this jury that you were at the murder scene," Icenhauer-Ramirez asked, "that your car was used in the getaway; that you've got the cash [from the robbery that allegedly motivated the murder]; [that] you've got the murder weapon; that you fled to Houston. ... but that you're not involved in this homicide?"

The defense will begin presenting its case this week.