The Austin Men's Project turns three -- and says goodbye to one of its original coordinators. 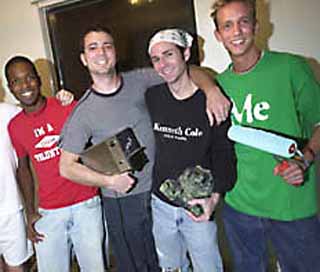 This month, the South Austin-based nonprofit Austin Men's Project (www.austinmensproject.com) turns three. To celebrate, AMP coordinators David Sweeney and Sonny Ballard recently led a group of seven AMP volunteers through an activity that was something of a splurge for the outreach organization: re-painting the house's main meeting room Tiffany blue. It's a notable birthday for AMP, which was funded by the University of California at San Francisco's Center for AIDS Prevention Studies (C.A.P.S.) for one year and has been bankrolled by AIDS Services of Austin ever since.

AMP is a "community building project" whose coordinators encourage the 18-to-29-year-old gay and bisexual men who attend their programs to "socialize, share, and encourage each other about safer sex and other issues of importance" without lecturing them about AIDS or safe sex. For example, when students were returning to college, AMP coordinators and their charges dressed up in football gear, went to Austin's gay bars, performed some "school cheers," and handed out "lunch bags" that contained safe sex materials and info about their organizations. The aim was precisely the same as, say, an administrator from AIDS Services of Austin -- to get young gay men to stop having unsafe sex -- but their method of disseminating information seemed fundamentally and refreshingly new.

In order to thrive, AMP must continue to invent creative ways of getting their peers to talk about safe sex. Sweeney, who has been an AMP coordinator since the program began in 1999, says the constant influx of clients who move to Austin or otherwise end up at the AMP house has played a significant role in achieving this goal. "The biggest struggle is always going to be apathy in the gay community," he said. "One group of people will say -- what's my favorite quote? -- 'AMP is a bunch of rich white guys partying in the guise of social work.' I suppose that from some point of view maybe one or two of the guys who come here are rich white guys, but I don't know where my money is!" Most AMP participants, he points out, are lower-middle-class gay men between the ages of 20 and 24; half are white, half Hispanic, "with a very small involvement of the African-American community" that AMP organizers are trying to bolster.

In the mid-Nineties, young gay men in Austin began receiving surveys that asked them a litany of impertinent (but confidential) questions about themselves and their sexual behavior. C.A.P.S. researchers were so interested in the private lives of young gay Austinites that they set up shop, so to speak, at the South Austin house, where their target audience could meet one another. The reason for their persistence wasn't merely extracurricular, however. From focus groups C.A.P.S. researchers conducted in San Francisco, they learned that young gay men tended to think that gay men who had AIDS were "older men with moustaches who go to leather bars."

In an 1990 article in the journal AIDS, C.A.P.S. researchers wrote that "the prolonged incubation period of HIV infection feeds this misperception, since men who become infected in their early twenties are not likely to show symptoms until they are in their thirties." They also determined that young gay men all over the nation were ignoring AIDS service organizations such as AIDS Services of Austin with what seemed like willful neglect. Young gay men didn't want to be reminded, much less admonished, that AIDS was still killing people.

"There's a variety of reasons why young gay men do not access the organizations that have grown up around HIV," ASA Community Information and Education Coordinator Sandy Bartlett told the Chronicle for a 1999 article about AMP. "Their experience is simply dramatically different in a lot of respects than, say, anyone 32 or older. We saw firsthand the devastation that was being wrought by the disease, and if that doesn't yank you into a state of reality pretty quick, I don't know what will."

But younger gay men have grown up with AIDS information. "They have grown up in an age of AIDS," Bartlett said at the time, "but given the long incubation period of this disease, they probably do not know anyone who has suffered significantly -- yet. Now they may know HIV-positive people, but their social circles have not been devastated by sickness and death from AIDS, so their perspective is significantly different."

AMP may still be a creative nonprofit, but for some time now it's been a creative nonprofit operating with less money than in years past. The group used to have three staffers, but because ASA is unable to fund them at the same level as C.A.P.S., only Sweeney and Ballard remain to conduct roughly the same number of programs. And although he is Austin's most visible young gay activist, Sweeney is about to move to San Francisco to work for C.A.P.S. and set up programs like AMP in other cities. His last day at AMP is March 29.