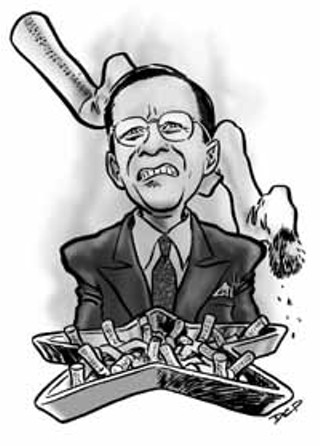 Among the many questions concerning former AG Dan Morales' somewhat puzzling campaign for governor is just what relation that campaign has to the complex aftermath of the state's tobacco litigation, won on Morales' watch as attorney general. Locally, the questions concern Morales' legal action against Harry Potter, an Austin attorney and the former special assistant attorney general most directly involved with the tobacco case. Some observers wonder whether Morales is in effect trying to use his former colleague as a shield -- against questions about unethical or illegal conduct that will inevitably be asked should he win the primary and face Rick Perry in the general election.

In 1996, Morales signed contracts with five big-league trial lawyers and sued the nations' tobacco companies in federal court in Texarkana, forcing Big Tobacco into a settlement that will bring the state of Texas at least $17.3 billion over the next 25 years. The five lawyers -- Walter Umphrey, Wayne Reaud, John Eddie Williams, John O'Quinn, and Harold Nix -- worked on contingency, and put more than $30 million of their own money into the suit, which cost the state nothing and would have earned the lawyers nothing if they lost. For their work, their money, and the risk they took, in 1998 they were awarded $3.3 billion in legal fees -- to be paid by the tobacco companies and not taken out of the state's $17.3 billion. And Morales had become a hot property. Defying public opinion and warnings from his political advisors, he beat the tobacco industry and had polling numbers other statewide officials could only envy. But a funny thing happened on the way to the forum in Texarkana in 1998, when the five trial lawyers showed up to claim their fees. A sixth attorney had appeared: an old friend of Morales by the name of Marc Murr, whose contract had remained out of the public eye for almost two years. None of the "Big Five" lawyers (nor the attorney general's public information officer, nor the press) had been aware of the contract. And almost no one had seen Murr in the courtroom in Texarkana. The initial contract signed by Morales for the state of Texas would have allowed Murr to collect $506 million.

Murr's fee payment -- if not his actual value to the case -- was eventually resolved, and not in Murr's favor. Two years ago, a panel that included a former federal judge, the dean of Texas Tech Law School, and a third arbitrator met in New York, and awarded $3.3 billion to the five lawyers who funded the case (over and above the $17.3 billion awarded to the state), and $1 million to Murr. The New York hearing was Murr's second swing at the tobacco-money piñata; two months earlier a separate arbitration panel of retired Texas judges (selected by Morales and Murr) had met in Texas to consider only Murr's fees, awarding him $260 million. But Murr will get neither $260 nor $1 million. After meeting with Attorney General John Cornyn and federal district Judge David Folsom in Texarkana, Murr's attorney Roy Minton announced that his client was dropping his claim to the tobacco fees. The judge allowed him 60 days to file another claim. None was filed.

The Murr contract, said UT law professor Charlie Silver, "exploded like a stink bomb," and provided the only plausible excuse critics of the fee agreement could find to challenge the overall fees. Those critics lined up at the door of the federal courthouse in Texarkana. John Cornyn -- at the time only a candidate for attorney general -- filed suit as a "private citizen," challenging all the fees. George W. Bush, at the time the governor of Texas and candidate for the presidency, filed suit, challenging the fees. Seven legislators filed suit, challenging the fees. Then all parties withdrew their suits. Then Cornyn, elected attorney general after Morales decided not to run, filed yet another challenge to the fees. His solicitor general admitted in federal appeals court last summer that Cornyn now hopes to "garnishee" the fees already paid to the five lawyers hired by his predecessor: Dan Morales.

In each of those lawsuits the defendants or respondents were served notice of the pending legal action by a constable or a professional service provider. A lawsuit filed in November is different. It's not quite a lawsuit. And Dan Morales' attorneys didn't hire a constable or professional server to deliver any legal papers. They used a service that delivers papers all over Travis County, seven days a week: the Austin American-Statesman. Harry Potter, the former assistant attorney general who had spent four years working on the tobacco lawsuit Morales filed in 1996, learned his old boss is taking him to court when he got a call from American-Statesman reporter Ken Herman.

"Harry had no idea what the reporter was talking about," said Potter's attorney Jim Richardson. "He had to ask him to fax the document over to him." Potter read the fax and called Richardson, whom he knew from their work together on a State Bar professional ethics committee. Richardson admitted that the unusual petition Morales filed against Potter doesn't require "service." But Potter and Morales had worked side by side for years, so there might have been a "heads-up" phone call.

There wasn't. The legal document was mailed to Potter two days after it was released to the press and filed. What arrived in Potter's mailbox was a "Rule 202" petition -- intended to compel someone to testify to determine if there is a reason to file a lawsuit. In this case, Morales, who is the subject of a federal investigation about the Murr contract, is asking Potter to testify under oath about his role, and that of Murr.

"There are no adverse parties," said Morales' attorney Paul Coggins. "There might not even be a lawsuit." Coggins, who worked as a U.S. attorney in Dallas before recently joining the Fish & Richardson law firm, is the newest member of the defense team Morales put together to deal with the ongoing federal criminal investigation of his actions in the tobacco litigation. Morales' other two attorneys are former San Antonio DA Sam Millsap and Gerry Goldstein, one of the most successful criminal defense lawyers in the nation. Coggins said he gave reporters copies of the petition shortly before filing it because it was more efficient than talking to one reporter at a time.

Sitting for a Smell Test

Morales says he only wants each party to raise his right hand and swear to tell the truth. "With everyone under oath having to tell the truth," Morales said, "I think it will become clear that all six of these lawyers who were engaged contributed substantially to the outcome." Telling the truth, for Morales, implies restoring Murr's good name, and thus vindicating Morales from claims about the illegality or impropriety of the Morales-Murr contract. Morales said Murr's contribution "was as great as or greater than several of the principal participants in the case." Yet, while attempting to vindicate the reputations of Morales and Murr, the petition Harry Potter got in the mail questions his integrity, and the integrity and professional reputation of one of the five lawyers Morales himself hired to represent the state six years ago. Morales also wants to question John Eddie Williams, one of the Big Five lawyers who represented the state. Potter, while not a member of Williams' firm, is now working for Williams. In his petition, Morales makes the argument that because Potter supported paying the Big Five lawyers and did not support paying Marc Murr, Potter's current working arrangement with the Williams law firm might be a conflict of interest.

Richardson says there is no conflict. While earning an assistant attorney general's salary, Potter coordinated an incredibly complex civil suit, then left the office and spent a year teaching law before considering any offers. Richardson suggests that there may well be other motives -- partly legal, partly political -- for the eagerness of Potter's former boss to get Potter under oath.

In the first place, the Murr contract Professor Silvers described as a stink bomb continues to smolder in the basement of the federal building in Austin, where assistant U.S. Attorney Sharon Pierce is well into her second year of an investigation focused on Morales. Morales' attorney Coggins says the federal investigation has produced no indictments in two years because there are no indictable charges. Indeed, another prominent criminal defense lawyer who has tried a half dozen cases involving political figures said if there were anything with which to charge Morales, charges would have been brought by now -- adding that the investigation has dragged on for so long that some of the statutes of limitations on possible charges have already expired. So at least one possible defense strategy, in questioning Potter and Williams, is to force the feds to put up or shut up.

But almost everyone remotely involved with the tobacco suit has now been questioned at least once. Potter was the one who initially discovered the Murr contract in AG files and then told the other members of the state's trial team about it. Richardson believes Morales would like to get Potter under oath, then press him for what he told the federal grand jury investigating Morales. "It wouldn't be the first time a civil suit was used as a back door into a criminal prosecution," Richardson said.

Richardson added that the 202 petition also provides gubernatorial candidate Dan Morales a ready response to "negative reports in the press." In other words, when asked about the Murr contract, Morales can say the issue is being settled in court, not in the newspapers.

Potter, who spent a year teaching legal ethics and a course on complex litigation at the UT law school before going into private practice, isn't talking, on advice from his lawyer. So Morales' high profile as a candidate has allowed him to shape the news coverage. "The tobacco suit is ancient history now, and the reporters that covered it are gone or working on something else," said an Austin lobbyist who closely followed the tobacco story. "So there's nobody to put this in context. Harry Potter ran the whole case for Morales and Morales knows it."

At least he used to know it. "Harry was the most valuable member of the Texas team. He's a great value to the state's taxpayers," Morales told American-Statesman reporter Bruce Hight. That was in 1998 -- a year before another newspaper, The New York Times, reported that the Dept. of Justice had begun an investigation that involved Marc Murr.

Louis Dubose is former politics editor of the Chronicle and co-author (with Molly Ivins) of Shrub: The Short but Happy Political Life of George W. Bush. He is at work on a book about the Texas tobacco litigation. 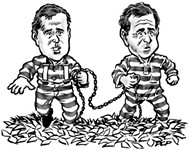 O, Brother! Where Art Thou?
Like Hugh Rodham, the Bush Bros. Have Capitalized on Family Ties