Why I'll Never Be Mayor: A Few Utopian Suggestions From a Citizen With a Notebook

Will alt-weekly city-beat writers soon be required to run for office? Congrats to Laura Miller, our erstwhile counterpart at the Dallas Observer, who on Saturday was elected mayor of Big D, replacing her old sparring partner Ron Kirk. (As if, say, Beverly Griffith had succeeded Kirk Watson.) Couldn't have happened to a ... well, not exactly a "nicer" person. Her farewell Observer column, addressed to her future colleagues, was titled, "I'm Your Worst Nightmare!"

Now, the worst nightmare for Mayor Miller -- and for the Chronicle's own alum Daryl Slusher -- is the looming municipal fiscal crunch. Dallas' city manager wants to lay off a couple hundred people, not a huge bloodletting in such a large city, but much more embarrassing to politicians than to honchos at Motorola. In Austin, City Hall continues to contort itself to avoid reductions in force.

Since we don't really want to be mayor of Dallas (or Daryl Slusher), we can safely say: Go ahead and lay people off. If City Hall continues to avert its gaze from new (ahem) revenue enhancements, then services shall be cut, and since salaries form the bulk of civic expense, the most efficient way to cut is to lay people off. In a town where thousands have seen their own pink slips, should taxpayers be asked to keep other people employed so municipal topsiders can save face?

Most city departments consider themselves understaffed as it is. The city has stopped hiring, eliminated vacant positions, and frozen salaries, without much regard to actual service needs. Continuing on such a track, spreading pain and frustration across the board, but still saying that laying off, say, 100 people remains a "last resort," is doing the municipal workforce no favors.

What's more uncool is that City Hall, having confused itself with Sunnybrook Farm, shrinks from reducing the city workload by judiciously reducing public services. Last year, when the city's pockets started to lose their jingle, City Manager Jesus Garza decided to not cut spending in any way that the public would actually notice. Otherwise, he feared, nervous consumers might spend less money and drive Austin's sales tax collections down even further.

Maybe that was so. But we won't be back to our giddy tech-bubble peaks for years, and citizens should accept fewer city services, especially if they were better. The lackluster quality of municipal services is a perennial theme of those who would overthrow the council in power. Asking city employees to do too much with too little, mostly just to make City Hall feel good about itself, does us no favors.

For example, in the last year the Austin Public Library has trimmed its workforce (though without layoffs) and its book acquisitions budget, but not its operating hours. (The downtown locations now open an hour later, but that's a clean-air strategy -- getting patrons and employees to avoid rush hour -- not a fiscal one.) Clearly, reducing hours would limit the accessibility of the library. But a properly staffed library with adequate materials, though open fewer hours, may be a better way to spend the citizens' money. Neither argument, really, informs city policy. Library hours matter to activists in high-turnout neighborhoods who block-walk for council candidates, and cutting library hours is an obvious sign that things ain't what they used to be.

Lately, people have cared more about the Austin Police Department, which is likewise understaffed and underequipped but can't reduce its operating hours. Or can it? Since we've already ruined our chances of becoming mayor of Dallas (or Daryl Slusher), let's go further. Cut the police budget.

The city says it must bring municipal spending in line with revenues. Spending on public safety, even before 9-11, was (by far) the largest and fastest growing sector of the city budget. (Even indigent health care costs, another huge problem for the city, are not growing as fast.) That's what happens when you decide to never, ever, cut, or even freeze, the police budget, lest voters find you and kill you. Austin is 100 cops, or however many (a point of confusion), short of its authorized sworn strength? Too bad. We don't have the money.

"But people will die!" shriek policing advocates -- like, say, Texas Monthly publisher Mike Levy, who unloads on City Hall weekly on this topic via his awesome e-mail list. Sadly, the public-safety-über-alles community has not explained how to pay for the police force they feel Austin needs. Levy has made great hay about the Austin Music Network ("amateur-hour-of-the-air programming that no one in their right mind would watch"). In terms of priorities, he's probably right. But the $800,000 or so the city most recently spent on AMN would pay for, maybe, 10 cops and their five cars. We feel safer already. (The same sum would, for a cash-strapped program like the library, or neighborhood planning, make a huge difference. But that's another column.)

There's always noise about the irresponsible City Council and its money-soaked "pet projects" -- a Levy rap that echoes Slusher's pre-officeholder riffs ("Earth to Council!") in these pages. But if people die because we don't have enough cops, it will be because our civic leaders have not had the guts to raise property taxes. (Okay, Laura, you're really safe now.) The gap in tax rates between Austin and other Texas cities is enormous. Those cities, according to Levy, have the cop-to-citizen ratios Austin should strive for. (Some of them also have more library books per capita.) Do the math.

For years, excuses have been made about Austin's status as a tax haven. We have the utility transfer, City Hall says. So instead of capturing Austin's new wealth with an admittedly imperfect property tax system, we have paid our cops and librarians by the most regressive means possible: a cut out of your electric and water bills. (Yes, we know, it's actually a cut of utility profits, but we could also have lower electric and water rates and a reasonable property tax rate.)

But we did reap the boom dividend, City Hall says, and we invested it in capital projects, because otherwise we'd just have hired a bunch of staff that you're now saying we should lay off. However, the city has not invented new, miraculous, self-operating libraries, police stations, and parks. The staff to run those new facilities are coming from the existing facilities, so everyone can get the same sub-optimal service from the same overburdened workforce.

Enough excuses. Either we consistently, though gradually, raise the property tax rate -- on top of the hikes we'll need to pay off past debt. Or we start laying off cops, cutting back on health care to the poor (again, another column), and shut the library doors. Even Jennifer Gale would lose votes with that as a platform. That's why some of us need to stay out of politics.

Note: Last week, our fingers, moving faster than our brain, wrote (in "Chartering a Course") that "No member of the current council lives west of MoPac ... ." While no council member lives in the high-turnout precincts of northwest and southwest Austin, both Will Wynn and Beverly Griffith live west of MoPac. We regret our error. 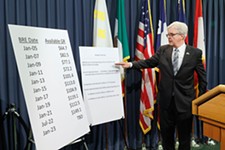 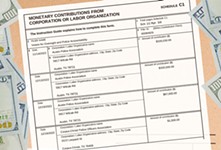