Baker and the Benney Tract 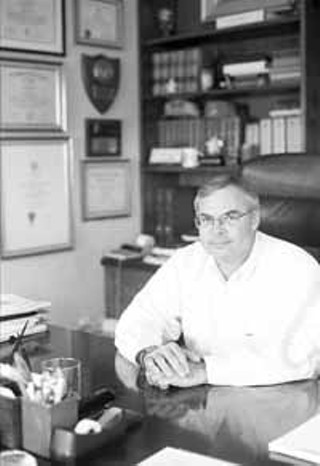 One rainy evening in November, only a handful of residents turned out for the second meeting of the Dripping Springs Economic Development Corp. (EDC), a voter-approved business assistance program designed to nurture the little city's financial vitality. Local residents' enthusiasm over this new economic engine abruptly shifted to skepticism when it became apparent that first in line at the public trough was none other than City Attorney Rex G. Baker III.

Baker appeared before the EDC not in his official city capacity, but as a commercial developer representing a well-established yet unnamed private business that was considering moving to larger quarters outside the city limits, taking with it a big chunk of tax revenue. As it happened, Baker had only recently bought a piece of property known as the Benney Tract, and had suggested the business owner relocate to that property -- with EDC assistance. The proposal was that the city would buy the lot from Baker and then develop the infrastructure for the new business, at EDC expense.

Did Baker have the city's interest at heart in trying to prevent a chunk of sales tax from leaving the city? Or was he merely interested in developing and thus increasing the value of his six-lot tract? From the perspective of the few residents who attended the EDC's meeting in November, Baker was using his inside knowledge as the city attorney to help develop his own property. Why, they wanted to know, was Baker the first -- and only -- person who knew to appear before the EDC tonight?

The EDC board members seemed a little perplexed themselves. It was, after all, only their second meeting, and they had no one from whom to take their cues except, perhaps, the city attorney: Rex Baker, who by this time had turned tail and left the room.

"How did the owner of the Benney Tract know to come to you tonight?" asked one audience member. "It appears that somebody had some inside information." Said another: "This property is owned by Rex. He's the city attorney. This creates a concern about favoritism from the get-go."

By the end of the meeting, the EDC board members, under chairman Paul Watkins' direction, essentially decided to revisit their mission and determine whether private business subsidies are really the best way to spend EDC money. The Benney Tract remains pending before the EDC. The property, meanwhile, has continued moving through the city development process as Baker works toward developing the tract, with or without help from the EDC.

Baker recently explained his motive for buying the land, in an e-mail response to questions from the Chronicle: "First and foremost, several significant businesses in Dripping Springs were in the process of moving their offices outside of the city limits. If those businesses left town, it would have a major impact on the city's finances." Baker said he approached the businesses and asked if they would remain in the city if an alternate site could be located for them. "I then agreed to purchase the land, subdivide it into usable lots for them and thereafter sell to them the lots they needed at my cost, at no profit."

As it happened, Baker continued, one of the businesses interested in moving onto his property had also inquired about EDC assistance. "Whatever comes out of those [EDC] discussions does not affect me or the balance of the lots. In fact," he added, "one of the other businesses that was considering leaving town has elected to build its facility on two of the Benney lots without approaching the EDC for any assistance whatsoever."

And that, many residents believe, is the way business should be done in Dripping Springs. With no EDC assistance whatsoever.