The city, businesses, and residents all seem pleased with the results of the East Martin Luther King Neighborhood Planning Workshop. 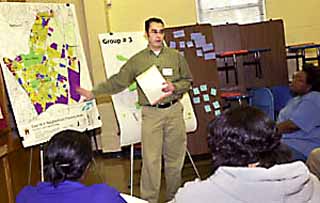 Scott Whiteman from the city of Austin's Neighborhood Planning and Zoning Dept. leads a discussion on land use with East Austin residents during Saturday's neighborhood planning workshop. (Photo By John Anderson)

About 100 Eastside residents, business owners, and neighborhood leaders gathered in the "cafetorium" of Norman Elementary School on Feb. 2 for the East Martin Luther King Neighborhood Planning Workshop, hosted by the city's Neighborhood Planning and Zoning Dept. Over four convivial hours, participants suggested to city staff ways to improve urban design, land use, transportation, and services in East MLK, a 5.5-square mile area that includes the Pecan Springs/Springdale, MLK, and MLK-183 neighborhoods. NPZD Director Alice Glasco was pleased with the "great" turnout, and says East MLK is the first of four neighborhood plans her department will initiate this year. "That's intentional," she said. "We need to plan now in order to have compatible development with Mueller [Airport], and figure out how to blend those two areas. I'm excited about this."

The plan will cover a larger territory than previous NPZD neighborhood planning efforts and affect more than 17,000 residents. Between 1990 and 2000, the number of housing units in the area has increased by only 4%, compared to nearly 30% citywide. At the same time, the area's population grew by 19% -- significant, though much less than the rest of Austin (41%). Most residents are African-American, but Hispanics are quickly catching up.

Despite that apparent diversity, East MLK residents and business owners indicated in a December neighborhood survey that they expect roughly similar benefits from the planning process: reductions in crime, traffic, and speeding, more sidewalks, and removal or repair of deteriorating houses and trash-filled yards. The city will fulfill some of these requests -- including new sidewalks on treacherous MLK Boulevard, renovations at Givens Playground, and Walnut Creek Trail development -- through its Capital Improvement Program. "People weren't shy at all about giving their opinions," said Steve Barney, the NPZD lead team member for East MLK.

Most workshop participants seemed supportive of the city's planning process. "It seems to be a good way to get community input," said Gwendlyn Williams, a Norman Elementary teacher. "Usually you just get a survey, send it back, and nothing happens." Added Marvin Massie, vice-president of the MLK Neighborhood Assoc. and an Eastsider for 28 years, this "clears up a lot of things. A lot of people don't regularly attend neighborhood meetings, or don't know where to get answers."

"I think the city's making a good effort," opined Pecan Springs resident Mark Terry, "but it's like most processes. A lot of it depends on implementation and priorities. I think we've not been a priority for a while." Now, Austin's growth has given city officials "no other choice" but to pay attention to the Eastside, said Terry, who hopes the East MLK plan will support more creative land use. "In other parts of Austin they have the ability to be creative in designing their neighborhoods. People in Travis Heights are subdividing lots, making green space. They're active community folks. It's not that way over here."

The next steps in East MLK neighborhood planning include a March 5 focus group meeting on vision and goals, similar meetings on land use, services, and transportation, a general neighborhood review of the plan, and a community open house, with a tentative City Council vote on the final product in October. Meanwhile, NPZD will kick off planning for the Franklin Park/McKinney/Southeast area on Feb. 9 at Smith Elementary, 9am-1pm, followed by workshops for the North Burnet/Gateway planning area on Monday, Feb. 27 (tentative), and Govalle/Johnston Terrace planning area on Saturday, March 2, 9am-1pm, at Allan Elementary.