Plenty of political aces in the tumbling house of cards 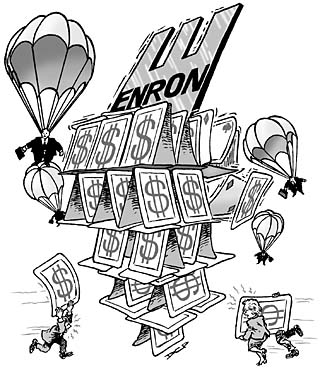 The public's shock at the burgeoning Enron disaster -- how could such a high-flying, energy-based, politically connected corporation come a cropper? -- might have been diminished somewhat by the memory of how the company acquired its unusual name. Formed by the 1985 merger of Houston Natural Gas and a Nebraska-based pipeline giant called InterNorth, the new entity spent some months as the unmelodious "HNG/INI" while the bosses hired a public relations firm to come up with a fittingly impressive corporate moniker. After many thousands of dollars of multilingual research, focus groups, database analyses, and the like, the consultants announced a name in keeping with the company's pretensions to anonymous power and technological implacability: "ENTERON."

Unfortunately, before the company could slap that gargoyle on a suitably monumental logo, somebody -- I think it was an impertinent classics professor down the road at Rice U. -- pointed out that the high-dollar consultants had somehow managed to select the Greek word for "intestines." The unveiling was canceled, heads rolled, somebody suggested deleting the middle syllable, and "ENRON" was born.

It was, as the auguries might say, an inauspicious beginning.

Having spent some time myself, a decade ago, laboring among the oil and gas towers of downtown Houston, I never particularly noticed that the boys and girls from Enron walked on water. They all seemed to put their Gap khakis on one leg at a time and bought and sold natural gas futures much as their suspendered predecessors had done since the days of Spindletop, without undue worry about infernal regulators in Austin or D.C. Suddenly, with the explosion of energy markets and the ascension from the oil patch of George W. Bush, Enron could do no wrong, and Ken Lay's Deregulation Gospel appeared infallible, even as before him Michael Milken's Junk Bond Scripture was once Holy Writ. In Houston, no asphalt was poured, no politician inaugurated, no public work contemplated without the imprimatur of Lay or his surrogates. What will the gossip columns do without him?

Last week, when Bush's press office attempted to pass off their boss's long-standing relationship with Lay as little more than a passing acquaintance -- "Really," the Bushies insisted, "he was more Ann Richards' buddy than Dubya's" -- the transparent betrayal must have seemed to Bush's principal Pioneer sharper than a serpent's tooth. (Democrats did get Enron contributions, but the GOP/Dem dollar ratio was three to one.) As the campaign finance records confirm (the fine folks at Texans for Public Justice, www.tpj.org, are suddenly in journalistic demand), Lay and Enron hitched their wagon to the Bush star from the beginning, on the reasonable expectation that Bush would do nothing to upset the time-honored Austin tradition that what's good for the oil and gas tycoons is good for Texas -- whatever the evidence or public outcry to the contrary.

The Lay aura was less visibly ubiquitous in Austin than on the Buffalo Bayou, but the abrupt rise and fall of Max Yzaguirre at the Public Utility Commission suggests that we haven't heard the last of the Enron fallout. Yzaguirre would have survived the revelations that he had fudged his Enron connections on his résumé -- that was, after all, how he got the job in the first place -- but once the Titan itself foundered, he was both tainted and expendable. There are no more contributions to be had from that quarter and no further reason to include Enronians among the future councils of the powerful.

Also unlamented is Enron board member and Senatorial wife Wendy Gramm, who with her husband Dollar Phil, helped engineer the regulatory vacuum enabling the cascade of phony Enron partnerships. Other compromised names include Attorneys General John Ashcroft and John Cornyn (because of campaign bucks, both had to recuse themselves from Enron investigations), as well as virtually every prominent Texas incumbent, including Gov. Rick Perry. Several of his GOP colleagues vow to return Enron contributions or give them to employee aid funds, but Perry insists he will not do so.

Can the Enron shadow darken Perry's future as well? Perhaps.

But what should be remembered beyond the next election cycle is that Enron's bipartisan political largesse was not simply about buying specific favors or legislative quid pro quo. It was primarily about sustaining a political culture that pretends devotion to the "free market" and disdain of "government," while privately manipulating the economy to its own ends and using the government as a defense against the public interest -- and an additional weapon in the ongoing transfer of power and wealth from the many to the few. If Enron's precipitous fall can put a dent in that bogus economic and political theology, it will have served some purpose beyond the sensational headlines. In Texas at least, that should not be too much to ask for.