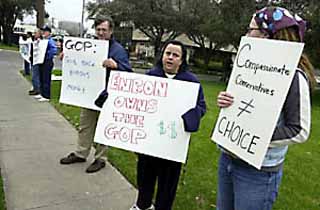 The Republican National Committee held its winter meeting last week here in liberal Austin, and unsurprisingly, protesters were waiting at the Hyatt Regency to greet them. The committee ratified former Montana Governor Mark Racicot as party chair, and vowed to pull more Hispanics and other minorities into the GOP. (Photo By John Anderson)

City budget projections continue to droop, and last week the City Council heard financial officers predict an $8 million shortfall this year growing to as much as $68 million for 2003, squeezed by declining sales tax revenues and additional "anti-terrorism" security expenditures. The advisers recommended a 1.66-cent increase in property taxes, which the council will consider on Jan. 31. That boost would deal only with this year's budget gap. Later this spring, the council is expected to consider spending strategies to address next year's much larger projected deficit.

Dwindling dollars didn't hinder the council from deciding last week to buy back "Block 21," which the city had leased to Computer Sciences Corporation. The city will pay $1.4 million (the final cost is disputed) for the land, and eventually figure out what to do with it. Proposals include an expanded City Hall or a new central library.

On Wednesday, Jan. 23, the city of Austin requested that all charges be dismissed against Longhorn Pipeline Partners Ltd. The city had filed 90 charges in Municipal Court against LPL for proceeding with its planned interstate gasoline pipeline through South Austin neighborhoods without city permits, and had issued a stop work order. Citing a Jan. 11 order from federal judge Sam Sparks that federal law overrules the city's pipeline permitting regulations, the city requested that the charges be dismissed. A decision on what additional action to take is pending.

In a continuation of its notoriously unsuccessful voluntary approach to pollution control, the Texas Natural Resource Conservation Commission voted Friday to accept TNRCC staff recommendations to reduce the state's industrial emissions of "greenhouse gases" -- major contributors to increasing global warming -- by voluntary methods. Despite a new agency report, mandated by the Legislature, which confirms the major role of Texas industry in emissions of carbon dioxide and other greenhouse gases, the commission issued 12 recommendations that "encourage," "promote," and "explore" solutions without making any new restrictions or requirements on industrial sources of greenhouse pollution. Business representatives insisted no action is necessary, but welcomed the voluntary approach, while state environmental groups that have formed the "Cool Texas Network" issued a report card giving the TNRCC recommendations an "F." "The quick and dirty is, the TNRCC punted on global warming," said Public Citizen's Tim Morstad.

After weeks of controversy and the widening ripples of the Enron bankruptcy scandal, public utilities chairman and former Enron executive Max Yzaguirre resigned from the commission last week. His resignation letter denounced "politically inspired" criticism, and Gov. Rick Perry, who appointed him to the commission in June, said Yzaguirre was a victim of partisan and unfair political attacks. The resignation followed weeks of accusations that Yzaguirre's Enron connections created a conflict of interest for utility oversight, and that more than $200,000 in Enron campaign donations to Perry suggested undue influence from the giant energy firm. Recent revelations that Yzaguirre was nominally connected to some of Enron's off-the-books partnerships apparently contributed to his demise.

The Zoning and Platting Commission postponed until next month action on a zoning change for the proposed new home of the peripatetic Cedar Door bar. The property on Toomey Road, currently zoned CS (commercial services), would need CS-1, which allows liquor sales. Parents at nearby Parkside School, as well as Z.A.P. Chair Betty Baker, looked askance at the site's suitability for one of Austin's most popular watering holes.

With nose firmly held, the Arts Commission recommended that three non-African-American artists be awarded Art in Public Places projects for the newly expanded George Washington Carver Museum and Library. While decrying the "lack of trust" that keeps black artists from participating in AIPP, the Commission asked that part of the public-art budget be given directly to the Carver to commission or purchase African-American art.

Texas leaders of the NAACP and LULAC announced plans for a joint race relations symposium to be held in March in Dallas, followed later in the year by town meetings in Austin and other Texas cities. The partnership -- which LULAC Director Vincent Ramos calls an "attempt to debunk the myth that African-Americans and Hispanics don't get along" -- stems from a cooperative agreement signed by the two groups last year.

Speaking of South Austin, on Jan. 28 the city will open a South Austin employment office in the Cherry Creek Shopping Center (5730 Manchaca) that will provide employment advice and counseling, job listings, and other services. The city runs two other field offices in north (825 E. Rundberg) and East Austin (2209 Rosewood).

Kirk Watson feels the Tiguas' pain. The former mayor and current candidate for state attorney general had an easy sell recently as he stumped for votes in El Paso. His audience: the Tigua Indian tribe, still reeling from AG John Cornyn's decision to shut down the Speaking Rock casino (the Tiguas' livelihood). Watson is trying to unseat the Republican incumbent. According to one El Pasoan who heard Watson speak, "He said all the right things. He said exactly what the Tiguas wanted to hear." As for Cornyn, the El Paso Democrat observed, "He's already ceded El Paso. He knows he can't win here."

Mayor Gus Garcia will discuss the city's reacquisition of land from CSC, the proposed "hospital within a hospital" at Brackenridge, and other hot-button political issues as presenter of the League of Women Voters' annual State of the City address, Tuesday, Jan. 29, 6-8:30pm at the Austin Woman's Club, 708 San Antonio. The event isn't free, so make reservations by calling 451-6710.

Now available on eBay: Tons of Enron paraphernalia, soon to be collector's items. Our favorite is a coffee mug, given to Enron employees in 1995, that on one side reads, "Enron Retirement Planning -- Tools and information for your future," and on the other, "Who decides where to invest your money? Only You."

Even while the Bush Administration threatens to roll back the federal Clean Air Act, it still claims to care about your lungs. This week, the Environmental Protection Agency urges Americans to celebrate National Radon Action Month by testing their homes for indoor radon gas -- the second-leading cause of lung cancer. The EPA reports that about one home in 15 across the U.S. has an "unacceptably high" radon level.

"Illegal to be Homeless: The Criminalization of Homelessness in the United States," a study recently issued by the National Coalition for the Homeless and the National Law Center on Homelessness and Poverty, lists Austin as the eighth-"meanest" city for homeless people. Topping its list was New York City. The entire report is available at www.nationalhomeless.org/crimreport/index.html.

The Friends of Patterson Park, a group that hopes to improve the park, will hold its inaugural meeting at Genesis Presbyterian Church (by the park) on Monday, Jan. 28, at 7:30pm. For more info, e-mail pattpark@texas.net.